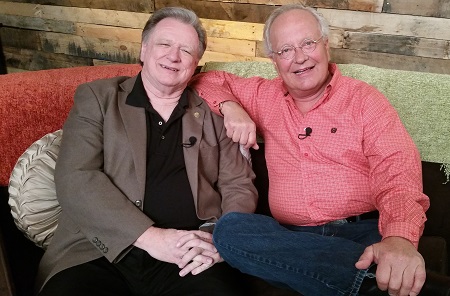 NASHVILLE, Tenn. (September 1, 2015) – Last night, a member of the Western Music Association Hall of Fame, Rex Allen Jr.,
was awarded with a standing ovation the Lifetime Achievement award by
the National Traditional Country Music Association. The prestigious
ceremony took place at the Plymouth County Fairgrounds in LeMars, Iowa
and was hosted by founder and lover of all traditional music, Robert
Everhart. The annual 7 day festival boasts 650 different performers on
10 different stages. Rex Allen Jr. is also in their Hall of Fame.

Rex shared, “My heart was full as I looked into the crowd and took it
all in. I’m proud of my roots and I’m thankful there are still so many
that appreciate wonderful classic Country & Western music.”

Country music fans will love this new intimate sit-down series as it
reveals unknown details about the artist, their music and their videos.
For instance, did you know Rex Allen Jr. narrated more
than 80 Walt Disney films? Or the fact that he is a legitimate cowboy,
riding bulls and bucking broncos for 2 years straight out of high
school. These are the kinds of fun facts country music lovers everywhere
can discover by tuning into the highly anticipated series
“Reflections.”

About Rex Allen Jr.
Began his career playing rhythm guitar for his famous dad, the
singing actor Rex Sr. He’s been a rodeo clown; a hit-making country
singer (with six Top 10 hits under his belt, including “Two Less Lonely
People,” “Lonely Street” and “No, No, No (I’d Rather Be Free)”; star of
his own TV series (TNN’s Yesteryear, from 1994 – 96); narrator of Jim
Carrey movie Me, Myself And Irene; and writer, director and actor in the stage show Gone Country, a Las Vegas hit of the late ’90s.