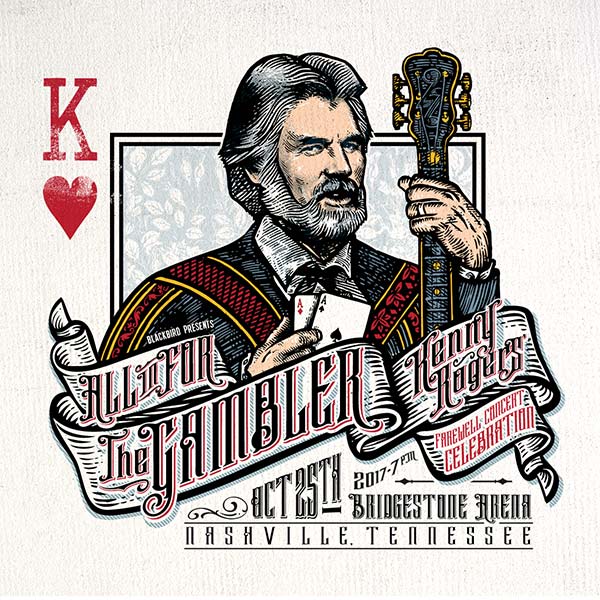 “ALL IN FOR THE GAMBLER:

TO BE HELD AT NASHVILLE’S BRIDGESTONE ARENA ON OCTOBER 25, 2017

EVENT TO INCLUDE A VERY SPECIAL APPEARANCE BY THE JUDDS

JUST RELEASED: FINAL BLOCK OF TICKETS ARE ON SALE NOW

Nashville, Tenn. — Music stars Reba McEntire, Chris Stapleton, Lady Antebellum and Wynonna Judd have been added to the momentous lineup for “All In For The Gambler: Kenny Rogers’ Farewell Concert Celebration,”
an all-star concert event taping at the Bridgestone Arena in Nashville,
Tennessee on Wednesday, October 25, 2017 at 7PM CT. In addition, The Judds (Wynonna and Naomi Judd) will reunite for an unforgettable performance.

The final block of tickets is now available via Ticketmaster.com, by
phone at 800-745-3000, all Ticketmaster locations and the Bridgestone
Arena box office. A portion of the proceeds will benefit the T.J.
Martell Foundation and the Kenny Rogers Children’s Center.

This once-in-a-lifetime concert event will honor Kenny Rogers’
historic 60-year career and will feature the final performance together
by Kenny Rogers and Dolly Parton.

“It is a great honor to learn that my friends Reba, Lady Antebellum,
Chris Stapleton, Wynonna, and The Judds will be performing at this
show,” says Kenny Rogers. “I admire each one of them for the music they
create and for the integrity that is always evident in their work.
Having them be a part of this once-in-a-lifetime night is going to make
things even more exciting for me. I appreciate them doing this, and all
of the other artists who will perform, more than they know.”

In a career that has spanned more than six decades, Kenny Rogers has
left an indelible mark on the history of American music. His songs have
endeared music lovers and touched the lives of millions around the
world. Chart-topping hits like “The Gambler,“ “Lady,” “Islands In The Stream,” “Lucille,” “She Believes In Me,“ and “Through the Years” are
just a handful of Kenny Rogers’ songs that continue to inspire new
generations of artists and fans alike. Rogers, with twenty-four
number-one hits, is a Country Music Hall of Fame member, six-time CMA
Awards winner, three-time GRAMMY® Award winner, recipient of the CMA
Willie Nelson Lifetime Achievement Award in 2013, CMT Artist of a
Lifetime Award honoree in 2015 and has been voted the “Favorite Singer
of All Time” in a joint poll by readers of both USA Today and People.

Blackbird Presents’ Keith Wortman, creator and executive producer of
Nashville’s recent highly acclaimed “Sing Me Back Home: The Music of
Merle Haggard,” is the creator and executive producer of “All In For The Gambler.“
GRAMMY® Award Winner Don Was will serve as music director, and preside
over a stellar house band backing the performers at this historic
concert event taping. Kenny Rogers’ manager, Ken Levitan, also serves as
executive producer. The event will be filmed and recorded for
multi-platform distribution throughout traditional media (worldwide
broadcast, music, and digital).

“Like millions of fans around the world, Kenny Rogers has been the
soundtrack of my life. As he finishes out this beautiful victory lap of
touring life, I am honored and privileged to create and produce a show
celebrating this special artist on this monumental occasion.” says Keith
Wortman, CEO of Blackbird Presents.