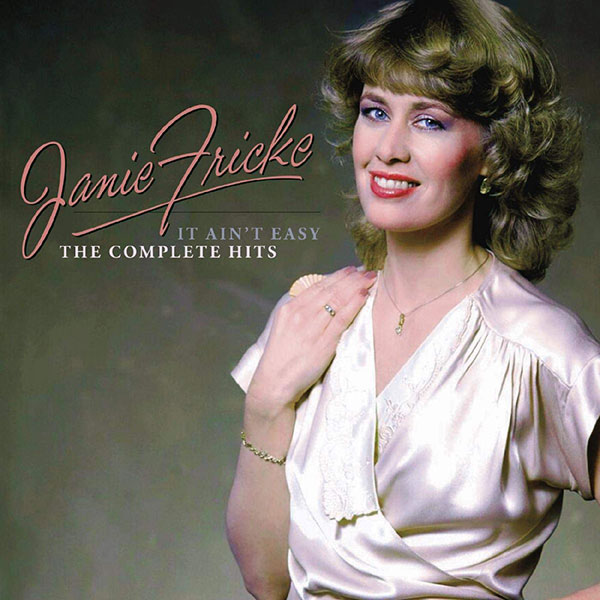 Two-time CMA and ACM Female Vocalist of the Year Janie Fricke announces Real Gone Music release of ‘It Ain’t Easy: The Complete Hits’,
available now. This 41-track, 2 CD compilation spans from 1977 to 1989,
including not just her solo smashes such as “What’re You Doing
Tonight,” “It Ain’t Easy Being Easy,” “He’s A Heartache (Looking For A
Place To Happen),” and “Tell Me A Lie,” but also her chart-topping duets
with Charlie Rich (“On My Knees”), Merle Haggard (“A Place to Fall
Apart”), Larry Gatlin (“From Time To Time”) and Johnny Duncan (“Come A
Little Bit Closer”). As an added bonus, Janie penned the liner notes,
which are accompanied by previously unseen photos and she autographed
100 booklets for fans who order ‘It Ain’t Easy: The Complete Hits’ through Real Gone Music.

“It is with thankfulness and sheer pride to see this project appear at a
time in my life when I least expected such a special gift,” says Janie
Fricke. “The team who researched my recordings worked many hours to come
up with choice songs from my recorded repertoire. As I look back to
those years of hours spent in the studio with the best producers,
musicians and engineers, I never dreamed that it would become a pretty
package all wrapped up, presented to me and the world in 2019.”

Raised on a farm in Indiana, Janie Fricke began singing in church, and
later turned that talent into a career which began as one of the
marketing industry’s most successful jingle singers. Long before her
success as a country artist, millions of people became familiar with
Fricke’s voice through ads for United Airlines, Coca-Cola, 7-Up,
McDonald’s and Red Lobster. She soon became a session singer where she
was singing background in the studio with some of the biggest country
stars of the late 70’s and early 80’s, including Loretta Lynn, Eddie
Rabbitt, Crystal Gayle, Ronnie Milsap, Barbara Mandrell, and Mel Tillis.

After a string of duets with such greats as Merle Haggard and Moe Bandy,
Fricke landed a solo recording contract in the early 80’s and scored
several hit singles, including “Don’t Worry ‘Bout Me Baby,” “He’s a
Heartache” and “You’re Heart’s Not In It.” She won CMA’s coveted “Female
Vocalist of the Year” in 1983 and ’84 and has been nominated for three
Grammy Awards. She has been credited with over 1,600 album projects and
scored 36 hit singles.

In recent years, Sony Music Entertainment made four of Fricke’s classic albums available to fans on Spotify, Apple Music and other digital platforms via the Legacy Digital Vault campaign, including The First Word In Memory, The Very Best of Janie Fricke, Black & White and Saddle in the Wind!
The collection of albums features the 18-time chart-topper’s biggest
hits, including “It Ain’t Easy Being Easy,” “Tell Me a Lie,” “She’s
Single Again” and more. Legacy Recordings also released The Essential JANIE FRICKE to all digital service providers earlier this year.

In addition, Fricke put a bluegrass spin with some fresh interpretations to many of her beloved tunes with the release of Country Side of Bluegrass.
The 13-track collection was produced by Bil VornDick, whose credits
also include Alison Krauss, Bela Fleck, and Marty Robbins, and features
some of the finest pickers in the industry.

6. On My Knees (with Charlie Rich)

7. Playing Hard To Get

8. Love Your Troubles Away For A While

11. Pass Me By (If You’re Only Passing Through)

13. Down To My Last Broken Heart

20. He’s A Heartache (Looking For A Place To Happen)

1. Let’s Stop Talkin’ About It

4. A Place To Fall Apart (with Merle Haggard)

5. The First Word In Memory Is Me

6. Who Cares (with Ray Charles)

7. All I Want To Do In Life (with George Jones)

11. Always Have, Always Will

14. From Time To Time (It Feels like Love Again (with Larry Gatlin and The Gatlin Brothers)

20. Love Is One Of Those Words

A two-time CMA & ACM Female Vocalist of the Year, Fricke has hit the
#1 spot on the Country charts an astounding 18 times. She was named
Billboard Magazine Top Female Vocalist, was the First Female Voice on
the Moon, and was named the UK’s Country Music Round Up’s Most Popular
International Female Solo Act. Her music has reached Gold and Platinum
sales status worldwide, and the talented and personable Indiana native
has recorded numerous jingles for Coca-Cola, Pizza Hut and United
Airlines. Janie has released 25 albums and 36 hit singles, and she
remains one of the most-beloved entertainers in the Country field. For
more information, go to www.janiefricke.com.