RASCAL FLATTS PREMIERE SPIRITED “I LIKE THE SOUND OF THAT” VIDEO 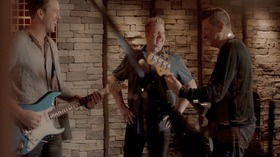 RASCAL FLATTS PREMIERE SPIRITED
“I LIKE THE SOUND OF THAT” VIDEO
Nashville, TN – Dec. 3, 2015 – Superstar vocal group Rascal Flatts
premiered the video for their infectious new single “I Like The Sound Of
That” exclusively on TIDAL today.  Directed by Kenny Jackson and John
Stephens, the fun-spirited music video offers a backstage pass into the
band’s creative process that is their everyday life, from working on new
songs to playing their headlining shows.  The progressive music
streaming service will host the video exclusively for seven days here.
“This song has become one of our favorites to play live,” said Jay
DeMarcus. “So with this video we wanted to show a bit of the process of
taking a song from the studio to the stage.  We always end up having a
lot of fun together in the studio and I think it lends itself perfectly
to the good natured vibe of the track.”

Rascal Flatts recently announced that they will return to The Joint
at Hard Rock Hotel & Casino in Las Vegas for a second, nine-show
residency, Rascal Flatts Rhythm & Roots kicking off Feb. 17, 2016.
The group’s Vegas stint will follow a raucous 2015 on the road for the
band who undertook the first-ever country residency at The Joint in
February, followed by their recently wrapped triumphant headlining tour
where “the band shook things up” (St. Louis Post Dispatch)
on their RIOT TOUR 2015.  The best-selling country vocal group of the
past decade Rascal Flatts has scored 15 No. 1 songs, sold over 22.8
million albums and over 29 million digital downloads worldwide to date.