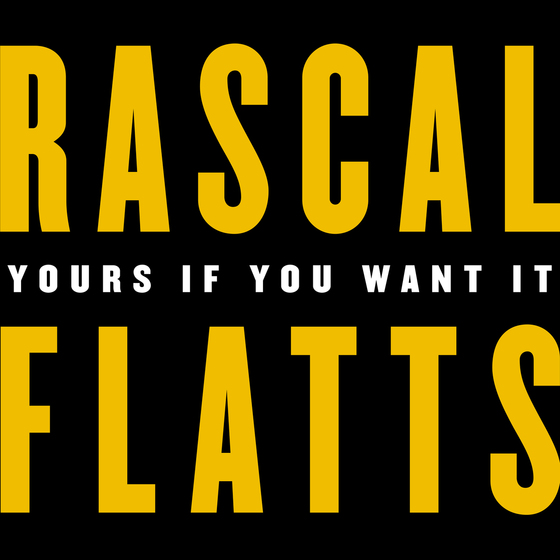 RASCAL FLATTS DROPS INFECTIOUS NEW SINGLE “YOURS IF YOU WANT IT” ON COUNTRY RADIO TODAY
Nashville,
TN – Jan. 6, 2017 – With 16 career No. One’s to their name, superstar
vocal group Rascal Flatts are continuing their reputation for infectious
anthems, as USA TODAY offered
the exclusive first listen of their new single, “Yours If You Want It,”
highlighting the “sure-fire smash” for “its intense verses, rousing
choruses and upbeat message.” Co-written by Andrew Dorff and Jonathan
Singleton, the immediate sing-along was produced by Rascal Flatts,
and spotlights the trio’s flawless harmonies throughout the altruistic
ode. The track, which is available everywhere today, premiered on iHeartCountry
Radio Stations nationwide. As fans have fervently anticipated new music
from the trio, the refreshing track is the lead single taken from the
group’s much-awaited forthcoming studio album. The track follows the
success of their summer anthem and PLATINUM-certified No. 1 hit “I Like
The Sound Of That,” from their ninth studio album REWIND (Big Machine
Records) which debuted at No. 1 on the Billboard Country Albums
chart, making them one of only four acts during the SoundScan era to
have eight consecutive studio albums debut in the top spot.
“We
all felt like ‘Yours If You Want It’ was the perfect way to introduce
our fans and radio to the new music we’ve been making,” said Jay
DeMarcus. “We’ve been working really hard and we’re very proud of this
track and what’s more, the late Andrew Dorff is a writer on it, and we
are so honored to be a small part of making sure his legacy lives on. We
have a special angel watching over it, for sure.”
Rascal
Flatts is kicking off 2017 hot on the heels of the success of their
first-ever Christmas album, THE GREATEST GIFT OF ALL, that saw Chicago Sun Times declare
that the group “put its signature stamp on a slew of Christmas
classics” that “oozes rollicking holiday spirit.” As best-selling
country vocal group of the past decade, Rascal Flatts has sold over 23.1
million albums, over 31 million digital downloads worldwide, as well as
earning over 40 trophies from the ACAs, ACMs, AMAs, CMAs, People’s
Choice Awards and more, also making them the most awarded country group
of the past decade. Known as one of the hottest-selling touring acts in
any genre, the trio also closed out 2016 celebrating a major milestone
of 10 million tickets sold, following a rousing year stacked of
headlining shows. For more information visit rascalflatts.com.