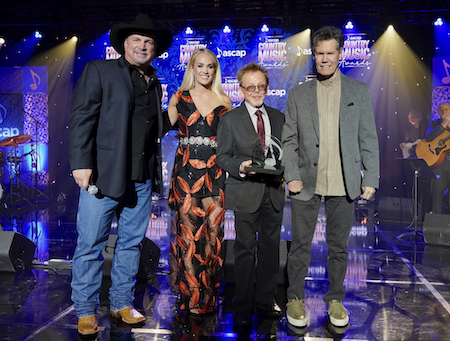 “This man saved country music single handedly…. I wouldn’t be standing
here if it weren’t for Randy Travis,” said Garth Brooks as he welcomed
Randy to the stage.

“Your music became a symphony to the lives of millions,” Mary
Travis said to her husband. “The songs that you left us before your
stroke six-and-a-half years ago will remain the soundtrack of our lives
Forever and Ever, Amen.”

These awards celebrate the songwriters and publishers of ASCAP’s most-performed country songs. Travis joins the ranks of Rodney Crowell, George Strait, Alan Jackson, Ricky Skaggs, Jackson Brown, Garth Brooks, Emmylou Harris, Tom Petty and Neil Young,
among others, as a Founders Award recipient. This particular award is
one of ASCAP’s highest honors, which is presented to songwriters and
composers who have made significant contributions to music and inspire
and influence the music community.

With lifetime sales in excess of 25 million, Randy Travis
is one of the biggest multi-genre record sellers of all time and a
recent inductee into the Country Music Hall of Fame class of 2016. His
honors include seven Grammy Awards, 11 Academy of Country Music
statuettes, 10 American Music Awards, two People’s Choice awards, seven
Music City News awards, eight Dove Awards from the Gospel Music
Association and five Country Music Association honors. In addition,
three of his performances earned CMA Song of the Year honors: “On the
Other Hand” (1986), “Forever and Ever Amen” (1987) and “Three Wooden
Crosses” (2002). To date, he has 22 No. 1 singles, 31 Top-10 smashes and
more than 40 appearances in feature films and television shows to his
credit. Four of his albums are Gold Records. Four are Platinum. One has
gone Double Platinum. One is Triple Platinum and another is Quintuple
Platinum. In 2004, Randy was honored with his own star in the Hollywood
Walk of Fame and is honored on the Music City Walk of Fame in Nashville,
TN. He has been a member of the cast of the Grand Ole Opry since 1986.
In 2017, Randy was honored with a wax figure at Madame Tussauds™
Nashville. Since his near fatal stroke in 2013, with the help of his
wife Mary and rigorous physical therapy, Randy continues to make
improvements in his speaking, walking, and yes, singing. With the help
of author Ken Abraham, he released his critically-acclaimed memoir in
2019, Forever and Ever, Amen. For more information please visitRandyTravis.com.

The
American Society of Composers, Authors and Publishers (ASCAP) is a
professional membership organization of songwriters, composers and music
publishers of every kind of music. ASCAP’s mission is to license and
promote the music of its members and foreign affiliates, obtain fair
compensation for the public performance of their works and to distribute
the royalties that it collects based upon those performances. ASCAP
members write the world’s best-loved music and ASCAP has pioneered the
efficient licensing of that music to hundreds of thousands of
enterprises who use it to add value to their business – from bars,
restaurants and retail, to radio, TV and cable, to Internet, mobile
services and more. The ASCAP license offers an efficient solution for
businesses to legally perform ASCAP music while respecting the right of
songwriters and composers to be paid fairly. With more than 720,000
members representing more than 11.5 million copyrighted works, ASCAP is
the worldwide leader in performance royalties, service and advocacy for
songwriters and composers, and the only American performing rights
organization (PRO) owned and governed by its writer and publisher
members. Learn more and stay in touch at www.ascap.com, on Twitter and Instagram @ASCAP and on Facebook.