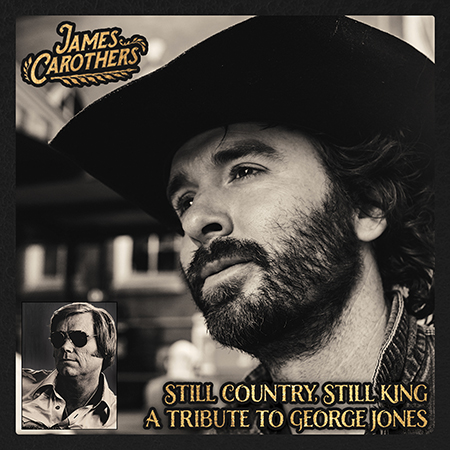 “‘Sinners
and Saints’ is a song for people to listen to and reflect on their
relationship with God,” Carothers says. “It’s a good ‘close to home’
type story that’s got it all: jail, church, adultery, gossip, and
redemption. To me, this fits perfectly into this whole George Jones
tribute because the music and songs are about people with a clear
definition of right and wrong and the moral conflict surrounding
decisions that we make. Afterall, we’re all sinners and saints,
depending on the moment!”

“Millennials,
Gen Xers, Boomers… everybody will be two-stepping by the end of
‘Sinners and Saints’. James Carothers summons the soul of George Jones
with a song we’re sure the ol’ Possum himself wouldn’t have passed up!
Carothers… country to the bone!” – Cathy Martindale, Racin’ Country syndicated radio show.

“It
was great to hear some true traditional country. James did George’s
‘Sinners and Saints’ proud and if the rest of the album is as good as
the single I’m sure George Jones fans all over the world are in for a
treat.” – Bob Guerra, New Music Nashville

Carothers will host an album listening party at The George Jones Museum in Nashville on Aug. 6. You can RSVP here. His album will officially be released Sept. 7. Keep up with James on Facebook, Twitter, Instagram and YouTube, and on his website at www.jamescarothers.com.

Mixing together Tennessee twang and southern storytelling, James Carothers makes throwback country music for modern times. His first full-length album, Relapse,
released in May 2017, bears similarities to classic releases by George
Jones, Waylon Jennings and Merle Haggard. Carothers wrote most of the
songs between daily gigs at The George Jones in Nashville. Since its
opening in 2015, he’s performed hundreds of shows at the venue. George
Jones’ own widow, Nancy, personally hired Carothers for the gig, giving
him the opportunity to make a living playing music. James now plays
several shows at venues in downtown Nashville each week when he’s not on
the road. In 2018, James was nominated for an Ameripolitan Award in the
“Outlaw Male” category. His hit song “Back to Hank” has received over
four million views on Facebook and his Spotify and Apple Music artist
profiles have been streamed over one million times combined. This
September, James will be releasing his newest album, Still Country, Still King: A Tribute to George Jones. James will also be making his Grand Ole Opry debut this year. For more information about James Carothers, visit www.jamescarothers.com.