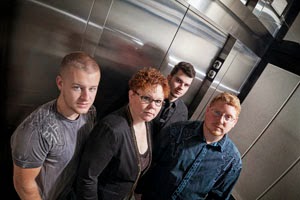 Siler
City, NC (June 30, 2014) – Nu-Blu, the fastest rising act in bluegrass
music, is gearing up to release their forthcoming Rural Rhythm Records
album, All The Way, on September 16.   The new music will serve as the follow-up to their last album, “Ten,” which coincided with the foursome’s musical journey as a band for a full decade.

“With this new project we are going all the way by stepping outside
of genre boundaries and letting our fusion of musical tastes and
interpretations guide us like never before,” says lead singer Carolyn
Routh. “Get ready, we have a few surprises in store and we’ve never been
more excited.”

The North Carolina natives will release the 10-track disc that will
showcase the individual musicians talents.  But get ready because there
is a surprise vocalist, someone who is a member of the Rock & Roll
Hall of Fame, has music in the Grammy Hall of Fame, and has proven to be
masterful at crossing genres from Rhythm & Blues to Country to Pop
and now is planning on leaving his mark in the Bluegrass world.  The
musical icon traded vocals with Carolyn on “Jesus and Jones,” a song
that pays homage to the late George Jones.

In addition, the ‘queen of bluegrass’ Rhonda Vincent makes a special vocal appearance on “That’s What Makes the Bluegrass Blue.”

3. Rhythm of The Train
(Rick Lang)

4. All the Way
(Carl Jackson/Allison Mellon)

8. It’s Not That Cold in Montana
(Kristy Jackson/Dillon Dixon)

Be prepared, and bring some sunglasses, because the future is looking very bright for Nu-Blu!!!