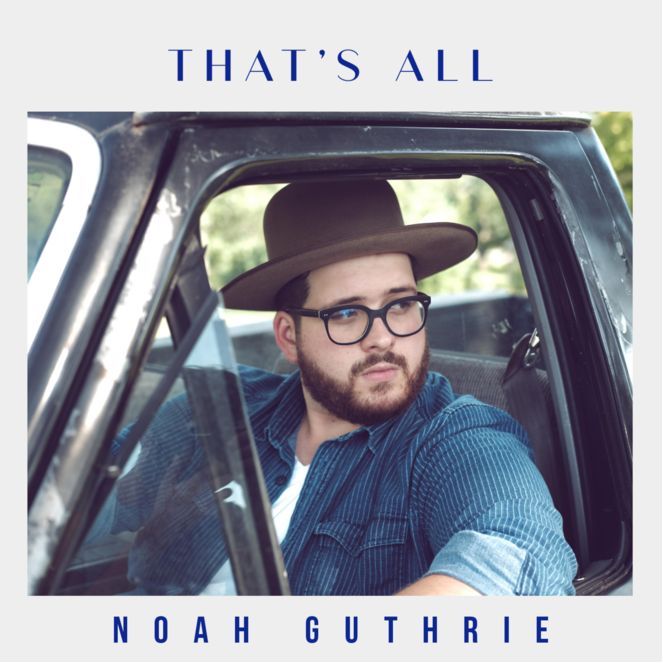 The new release, written by Guthrie, Cory Batten, Jason Duke, and Jason Massey, and co-produced by Noah and his brother, Ian Guthrie, at Studio 101 in Woodruff, South Carolina, is now available here.

Over
the years, Guthrie has earned a reputation for writing honest music
that is representative of real-life stories. The emotional recording,
“That’s All,” signifies that and shares the perspective of someone who
has moved on from a past relationship; however, they can’t help but
wonder how things might be different had they made other choices in the
past.

Guthrie comments about the poignant song, saying, “I
think that everyone, at some point in their lives, has questioned what
might have been. What if that relationship had worked out? What if I
hadn’t moved away? What if I could rewind the clock and take back the
horrible words I said but didn’t mean? It’s human to feel this way.
That’s All is a song that deals with this feeling.”

To date, Guthrie has released two original albums, The Valley (2017) and Among the Wildest Things
(2013), both of which have received critical acclaim.  Guthrie has been
in the studio recording new music, which will be released in the coming
months.

Guthrie first garnered attention by covering
chart-topping hits and posting them online, which landed him a pivotal
role on the hit TV show, Glee, as Roderick Meeks. His commitment to
releasing new content has cultivated a dedicated fanbase online and has
garnered over 85 million total views and 512k engaged subscribers on his
YouTube channel.

Over time, it’s become clear that his skills
are better put to use creating original music. Guthrie, a growing secret
to today’s music scene, has been touring his original music performing
as an opener for Dwight Yoakam and Willie Nelson.  Last December, Noah
toured overseas on the Hell or High Water tour, with shows spanning the
United Kingdom and The Netherlands. Guthrie and his band, Good Trouble,
were also featured performers on Rock Boat XVIII with Sister Hazel, Barenaked Ladies, needtobreathe, Drew Holcomb,
and others. He has toured Europe 6 times and had performed in the
Middle Eastern nation of Oman. Throughout his young career, Guthrie
opened for a wide variety of artists, including Ed Sheeran, Neon Trees,
Ben Rector, Corey Smith, Sister Hazel, Matisyahu, Matt Nathanson, and
Selena Gomez.

Also, he has performed on NBC’s Today Show and
Tonight Show, Hallmark Channel’s Home & Family, ABC’s Dancing with
The Stars, and was a semi-finalist on season 13 of NBC’s America’s Got
Talent.