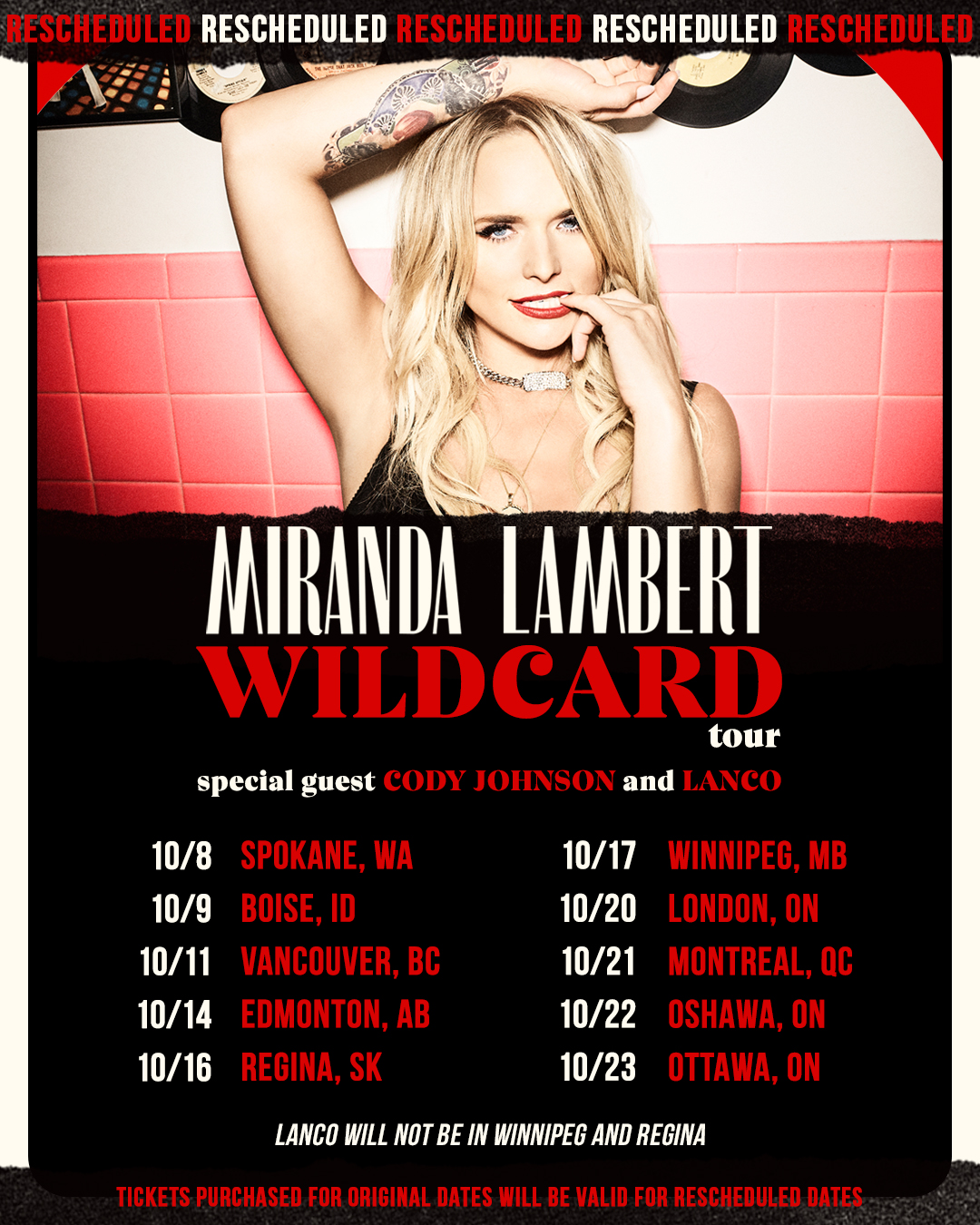 Country music superstar, Miranda Lambert, has announced the rescheduled dates for the two remaining US shows and the upcoming Canadian run of her wildly successful Wildcard Tour. The tour has steadily been receiving glowing reviews and has proven to be a must-see concert event.

“The
songs resonate like a sure bet for an artist that continually presses
in her chips on pushing country music’s modern landscape. With cuts like
the rock ‘n’ roll-soaked “Mess With My Head,” shoegazing story
“Bluebird” or tipsy singalong “Tequila Does,” Lambert doesn’t cater to
trends or fall back to a proven path. She carves her own space at the
table, entertaining arena-sized audiences along the way.” – The Tennessean

Lambert will continue on the Wildcard Tour with Special Guests, ACM and CMA nominee Cody Johnson and chart-topping group, LANCO.

Miranda’s MuttNation Foundation campaign, Fill the Little Red Wagon presented
by Tractor Supply Company will also be part of these rescheduled dates.
Fans are encouraged to help shelter pets in each tour city by donating
dog food, treats, supplies and cash at each venue’s entrance prior to
the show.

The tickets purchased for the original shows will still be valid for the
new dates. For more information and to purchase tickets, visit www.MirandaLambert.com and follow @MirandaLambert on social media.

“She (Lambert) was fired up and totally at the top of her game,
blazing through a 20-plus-song set list with tons of energy and pure
emotion.” – The Boot

*Lanco will not appear in Regina, SK and Winnipeg, MB.

Vanner Records/RCA recording artist Miranda Lambert released her
highly-anticipated new studio album Wildcard Nov. 1, which includes the
Grammy-nominated “It All Comes Out in The Wash” and her latest country
radio single, “Bluebird.” In January, Miranda embarked on her Wildcard
headlining tour with special guests Cody Johnson and LANCO.

The most decorated artist in the history of the Academy of Country
Music, Lambert is the recipient of more than 70 prestigious awards and
special honors: 34 ACM Awards (including 9 ACM Female Vocalist of the
Year Awards), 13 CMA Awards (Country Music Association), 2 GRAMMY
Awards, the Harmony Award (Nashville Symphony), Artist in Residence
(Country Music Hall of Fame), the ACM Gene Weed Milestone Award, ACM
Song of the Decade Award, and was named 2019 RIAA’s Artist of the Year.

The celebrated singer/songwriter has released seven studio albums that
all debuted at No. 1 on the Billboard Top Country Album Charts,
including the critically-acclaimed Wildcard (2019), The Weight of These Wings (2016), Platinum (2014), Four The Record (2011), Revolution (2009), Crazy Ex-Girlfriend (2007) and Kerosene (2005). In addition, she released three albums with her trio, the Pistol Annies. ​

Miranda’s MuttNation Foundation, a 501c3 nonprofit, is celebrating its 10th Anniversary. Since
its inception in 2009, MuttNation has raised over $3.9 million in
support of its mission to promote the adoption of rescue pets, support
animal shelters across the country, advance spay & neuter, and
assist with the transport of animals during times of natural disaster. www.muttnation.com

Her clothing and cowboy boot collection, Idyllwind, is a private-label brand sold at all Boot Barn stores nationwide. www.idyllwind.com.

For more information go to www.mirandalambert.com

With more than one billion career streams, ACM New Male Artist of the
Year nominee Cody Johnson has clearly established a rabid following of
loyal fans who thirst for his authentic brand of country music. The
aptly named “COJO Nation” purchased half a million concert tickets in
one calendar year and regularly pack out shows across the country.
Johnson sold out 45+ shows in 2019 alone including a sold-out show at
the historic Ryman Auditorium and RODEOHOUSTON for the second
consecutive year. Johnson’s first major release on COJO Music / Warner
Music Nashville, Ain’t Nothin To It skyrocketed to No. 1 on both the Billboard Top Country Albums and All-Genre Digital Sales charts. Also reaching Top 10 on Billboard 200,
it became the third-highest pre-added album of all time in the country
music genre on Apple Music at the time of release. Johnson’s “On My Way
To You” has been RIAA certified Platinum and marks his first Top 10 hit
at country radio. The country star is known for his explosive live shows
and electrifying stage presence. Even prior to signing a joint venture
with Warner Music Nashville, Johnson’s independently released project
reached No. 2 on Billboard’s Top Country Albums chart and No. 11 on the Billboard 200 Chart. Johnson has been named one of The Tennessean’s “Nashville’s Next Stars,” MusicRow’s “2019
Next Big Thing,” iHeartRadio’s “Artists to Watch in 2019,” and
highlighted on Pandora’s “Artist to Watch 2019” playlist. Johnson began
2020 on Miranda Lambert’s Wildcard Tour, which spanned coast to coast throughout the spring.

LANCO continues to pave its course after the success of their 2x
PLATINUM multi-week radio chart-topper “Greatest Love Story” and
critically acclaimed GOLD hit “Born To Love You.” The five-man band’s
No. 1 selling debut and coming-of-age album, HALLELUJAH NIGHTS, made
LANCO the first Country group to debut on the Billboard Country albums
charts at No. 1 in 10 years. LANCO recently impacted Country radio with
their new single “What I See” which became the most-added single of
their career and is known for its nostalgic twist on hometown memories
blended with organic sounds that heighten LANCO’s signature anthemic
melodies and sing-along choruses. “What I See” was written by frontman
Brandon Lancaster, drummer Tripp Howell, bassist Chandler Baldwin and
Jeremy Spillman. The new music from the ACM “New Group of the Year”
follows multiple nominations from the CMT, CMA, ACM, AMA, and
iHeartAwards, while Lancaster became the first member of a group to ever
win NSAI’s “Songwriter/Artist of the Year.” For more information on
LANCO, visit www.lancomusic.com.