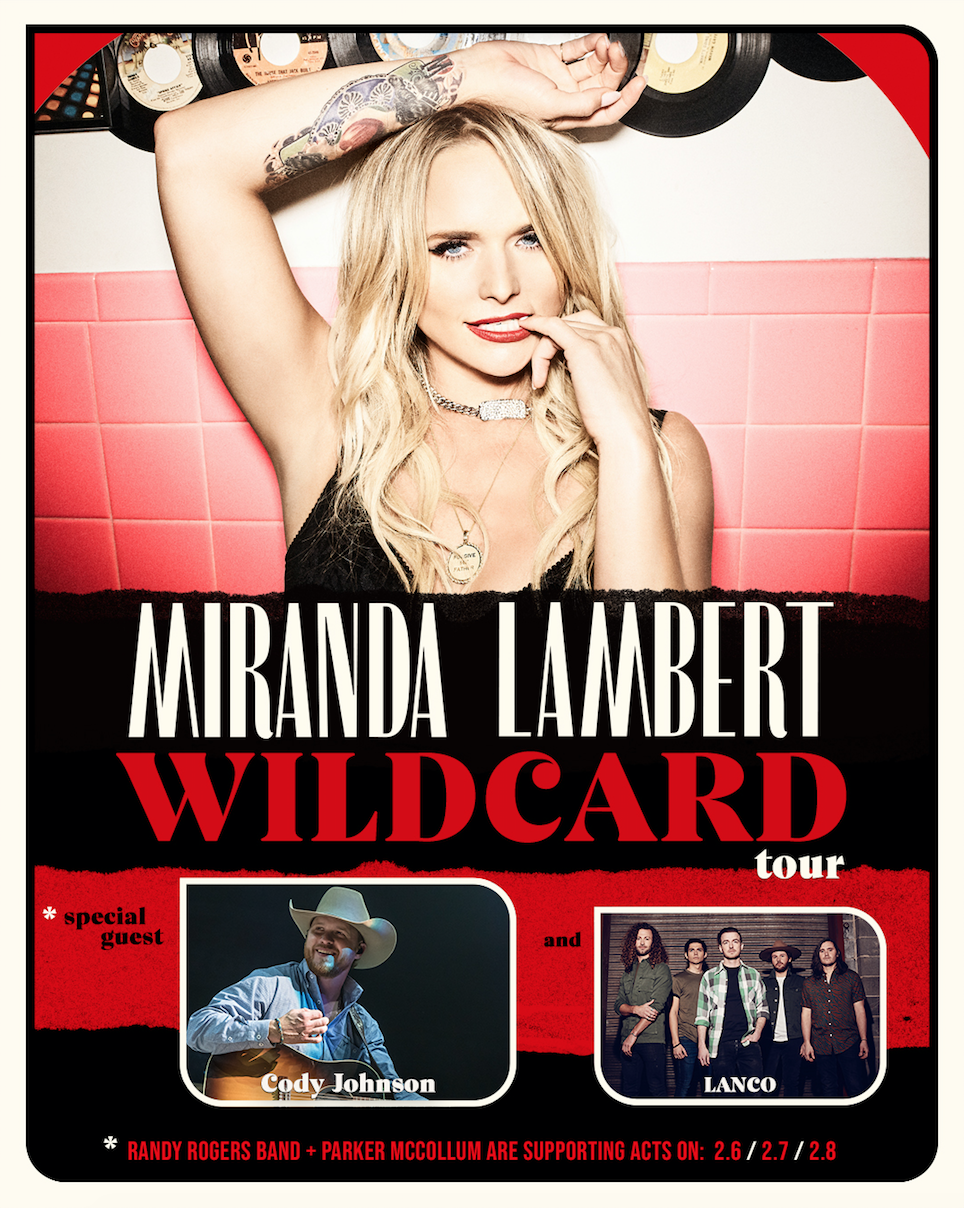 After thrilling fans with the opening weekend of her currently underway Roadside Bars & Pink Guitars Tour, which continues throughout the fall, CMA Female Vocalist of the Year nominee and seven-time winner in the category Miranda Lambert announces plans to continue touring into 2020 with tickets on sale starting Friday, Sept. 27 at 10 a.m. local time.

The Wildcard Tour, named for Lambert’s November 1 seventh-studio album designated one of the “most anticipated albums of Fall 2019” by Billboard,
features 27 dates across several major markets throughout the U.S. and
Canada, including a January 24 stop at Nashville’s own Bridgestone
Arena.

“The essence of a wildcard is always having something up your sleeve, in
whatever capacity that means to you,” shares Lambert. “It is universal.
Which is why I’m excited to kick off this tour with an incredible group
of talented artists. We’re going to have a blast!”

Additionally, the tour will feature the return of Lambert’s MuttNation Foundation campaign, Fill the Little Red Wagon presented
by Tractor Supply Company. Fans are encouraged to help shelter pets in
each tour city by donating dog food, treats, supplies and cash at each
venue’s entrance prior to the show. Dog-loving supporters who complete a
sign-up form at the donation point will also be entered to win a meet
& greet with the Country icon for themselves and a guest.

Citi is the official presale credit card of the Wildcard Tour.
As such, Citi cardmembers will have access to purchase presale tickets
beginning Tuesday, Sept. 24 at 12 p.m. local time through Citi
EntertainmentSM. For complete presale details visit www.citientertainment.com. Tickets begin to go on sale to the general public Friday, Sept. 27 at www.MirandaLambert.com and via Live Nation, the official tour promoter, at www.LiveNation.com. On-sale dates may vary by market. Please check your local listing for on-sale dates and times.

For more information and to purchase tickets, visit www.MirandaLambert.com and follow @MirandaLambert on social media.

Vanner Records/RCA recording artist Miranda Lambert just released her
highly anticipated new country radio single, “It All Comes Out in the
Wash.” This fall, with the impending release of her November 1 album Wildcard, Lambert has embarked on her rotating, all-female Roadside Bars and Pink Guitars Tour
featuring Maren Morris, Elle King, Ashley McBryde, Tenille Townes,
Caylee Hammack, and the Pistol Annies. This follows two extensive tours
in 2018, Living Like Hippies in the winter/spring and The Bandwagon summer tour with Little Big Town. January 2020 will see her embark on the recently announced Wildcard Tour in support of her new album of the same name.

The most decorated artist in the history of the Academy of Country
Music, Lambert is the recipient of more than 70 prestigious awards and
special honors: 34 ACM Awards (including 9 ACM Female Vocalist of the
Year Awards), 13 CMA Awards (Country Music Association), 2 GRAMMY
Awards, the Harmony Award (Nashville Symphony), Artist in Residence
(Country Music Hall of Fame), the ACM Gene Weed Milestone Award, ACM
Song of the Decade Award for “House That Built Me” and several others.

The acclaimed singer/songwriter released six studio albums that all debuted at No. 1 on the Billboard Country Album Charts, including the critically acclaimed double record The Weight of These Wings (2016), Platinum (2014), Four The Record (2011), Revolution (2009), Crazy Ex-Girlfriend (2007) and Kerosene (2005). In addition, she released three albums with her trio, the Pistol Annies.

With over 800 million career on-demand streams, Cody Johnson has clearly
established a rabid following of loyal fans who thirst for his
authentic brand of country music. The aptly named “CoJoNation” purchased
half a million concert tickets in one calendar year and regularly pack
out shows across the country. Johnson has already sold out over 42 shows
so far in 2019 alone. For the second consecutive year, Johnson sold out
NRG Stadium at RodeoHouston with 74,177 in attendance. Johnson’s first
major release on CoJo Music / Warner Music Nashville, Ain’t Nothin To It skyrocketed to No. 1 on both the Billboard Top Country Albums and All-Genre Digital Sales charts. Also reaching Top 10 on Billboard 200,
it became the third-highest pre-added album of all time in the Country
music genre on Apple Music. Johnson’s “On My Way To You” has been RIAA
certified Gold and marks his first Top 10 hit at Country radio. The
former rodeo bull rider, turned prison guard, turned country star is
known for his explosive live shows and electrifying stage presence. Even
prior to signing a joint venture with Warner Music Nashville, Johnson’s
independently released project reached No. 2 on Billboard’s Top Country Albums chart and No. 11 on the Billboard 200 Chart. Johnson has been named one of The Tennessean’s “Nashville’s Next Stars,” MusicRow’s
“2019 Next Big Thing,” iHeartRadio’s “Artists to Watch in 2019,” and
highlighted on Pandora’s “Artist to Watch 2019” playlist. Johnson’s
current single “Nothing On You” is currently climbing the Country radio
charts and has already surpassed 16 million on-demand streams.

LANCO has paved the course for critical acclaim with the success of
their 2x Platinum single “Greatest Love Story” which became a multi-week
chart topper. Following the release of their No. 1 selling debut album Hallelujah Nights,
which has over 560 million streams, both moments were historical in
Country music as Lancaster became the first artist in 10 years to have a
No. 1 on the chart solely written by that artist, while LANCO served as
the first Country group in a decade to appear at the top of the Billboard
Country albums chart with a debut album. As they are currently in the
studio once again with producer Jay Joyce, LANCO continues to prep their
upcoming sophomore album after the release of its lead track “Rival,”
written by frontman Brandon Lancaster and drummer Tripp Howell. LANCO
recently earned their first award as ACM New Group of the Year and has
garnered additional nominations from the CMT, CMA, AMA and iHeart
Awards, while Lancaster became the first member of a group to ever win
NSAI’s Songwriter/Artist of the Year award. This summer, they’ve
performed at Country music’s biggest festivals after hosting capacity
crowds overseas and serving as support for artists such as Dierks
Bentley and Chris Young. For more information, visit www.lancomusic.com.

In a business where bands come and go and membership is often
a revolving door, the Randy Rogers Band has been making music and
touring together for more than 18 years. The culmination of the
six-member band’s musical journey thus far can be heard on its latest
album Hellbent (April 26, 2019). The 11 tracks were produced by
Dave Cobb (Chris Stapleton, Brandi Carlile, Jason Isbell) and recorded
at the legendary RCA Studio A in Nashville, Tennessee. Randy and the
band have become skilled at capturing a unique live energy and passion
on their albums and Hellbent is the perfect example. So, what
keeps a band together for nearly two decades? Randy cites the blend of
the members’ distinctive personalities, represented in a dynamic musical
chemistry that has taken the Randy Rogers Band beyond the competitive
music scene in their native Texas, to a national fan base with sold
out shows across the country.

A singer/songwriter, multi-instrumentalist, anddedicated road warrior,
Parker McCollum began building a following in his native Texas with
2015’s The Limestone Kid. The album track “Meet You in The
Middle” became a hit on Texas’ regional radio chart — no small feat for
an independent, 22-year-old musician — but it was the album’s
widely-acclaimed follow-up, Probably Wrong, that helped Parker
find national success. Born in Conroe, Texas, and currently based in
Austin, the now 27-year-old bridges the gap between Texas’ homegrown
music scene and Nashville’s country-industry headquarters. His
songwriting earned him a publishing deal with Warner/Chappell Nashville
in May 2018 and a recording deal with Universal Music Group Nashville in
June 2019. “Pretty Heart,” co-written by McCollum and Randy Montana
and produced by Jon Randall, is Parker’s first song release
since signing with MCA Nashville.