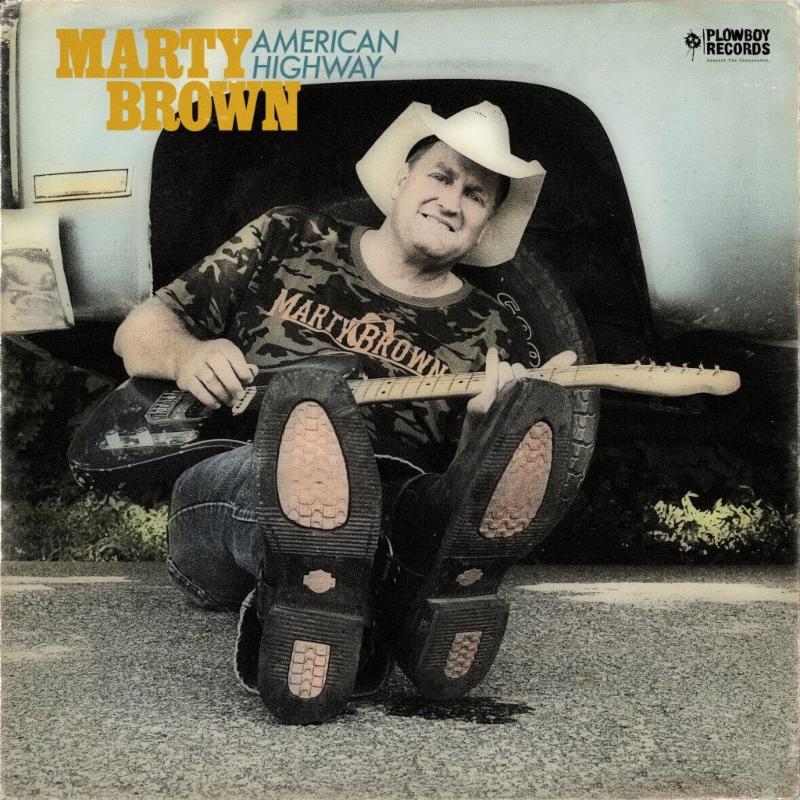 MARTY BROWN
explores the lesser traveled musical road on his new CD, AMERICAN
HIGHWAY. Set for May 17 release, the Plowboy Records’ disc is Brown’s
first in two decades – and shows just how far a little exploration can
take an artist. This is a righteous, joyful foray that features
stylistic growth and gentle genre bending – and Brown is proud to share
production credits with the revered Jon Tiven (B.B. King, Wilson
Pickett, Waylon Jennings) with whom he co-wrote nine of the disc’s 10 songs.

“Marty
took 20 years off from recording,” notes Plowboy President Shannon
Pollard. “Most artists would never attempt a comeback; for Marty it was
always impossible to imagine that he wouldn’t return to the studio. He
is just as raw and brilliant as ever – but he’s expanded his horizons,
and this is one AMERICAN HIGHWAY that we are excited to travel.”Fans can pre-order the CD now.

Brown views the new music as his best work yet. He considers the disc to be his “Rembrandt”
or “Michelangelo;” an achievement that marks the pinnacle of his
creative efforts. With songs ranging the gamut from the big-city swagger
of his current single, “Umbrella Lovers,” to the funky “Casino
Winnebago,” and from the deceptively simple
“Kentucky Blues” to the raw, Springsteen-esque channeling of the title
track, the album covers rarified ground. The Brown/Tiven writing team
creates a unique partnership – Brown writes the lyrics and turns them
over to Tiven who then writes the music. It’s a process that expands and
enhances each song. “It’s pretty magical,” Marty admits. Reviewers are
calling the project “Vibrant, candid, and reverent (Midwest Music Review)” and note Brown
“keeps to the roots of true and traditional Country music (KAYO Radio)”
with a voice “that breathes and lives with every lyrical nuance
(Roughstock).”

4 – Shaking All Over The World

5 – When The Blues Come Around

6 – Right Out Of Left Field

*All songs written by Marty Brown and Jon Tiven, except for track 2, which includes Kristopher Martin Brown.

Born
in Maceo, Kentucky, Brown first rose to fame as an artist on MCA
Records in the 1990s, but he is also known as the songwriter behind
mega-hits for Tracy Byrd (“I’m From The Country”), Brooks & Dunn
(“It Ain’t Me If It Ain’t You”), and Trace Adkins (“When I Stop Loving
You”). After releasing three albums for the label, Marty disappeared
from the public eye. Though he still traveled to Nashville occasionally
to write, Brown spent most of his time with his family in Kentucky. He
returned to the national stage with a show-stopping performance on America’s Got Talent in
2013. His touching rendition of Bob Dylan’s “Make You Feel My Love”
went viral, generating over 11 MILLION views on YouTube. The rest, as
they say, is history. His Top 10 AGT finish convinced Marty to
step back into the spotlight and since then he has performed at the
historic Ryman Auditorium, returned to the Grand Ole Opry stage, and
signed autographs at CMA Music Fest. His much-anticipated CD, AMERICAN
HIGHWAY, will be released May 17.