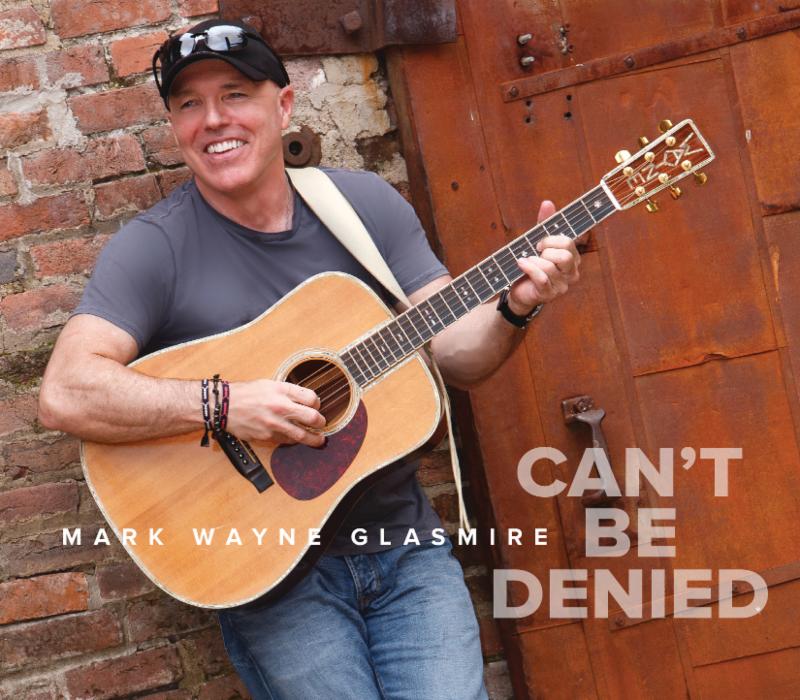 Nashville, TN (August 30, 2018) – The broad appeal of award-winning singer/songwriter Mark Wayne Glasmire CAN’T BE DENIED, and the proof is found in this upcoming 12-track collection, which drops October 12. Available for pre-order now at Amazon and CD Baby
and co-produced by Glasmire and John Albani (Steve Azar, Monty Holmes,
Randy Boudreaux), the album reflects Mark’s evolution as a writer and
spotlights the purity of his voice as well as his talent for creating
melodic magic.

While
not a concept album, CAN’T BE DENIED focuses on love in many of its
diverse manifestations. In Glasmire’s world, love molds us, changes us,
tempers us, challenges us and rewards us. Love is all.

The disc
opens with its first single release, the mid-tempo “I’ve Got A Feeling.”
Banjo, fiddle, B-3 vamps and a mind-hijacking, sing-along chorus make
this exploration of love at first sight an upbeat return to the airwaves
for the Pennsylvania native. A companion music video premiered yesterday on Center Stage Magazine, was spotlighted on Roughstock, and has been added to the international Hotdisc Top 20 TV show. Delivered to radio programmers via PLAY MPE, the track is available for download from AirPlay Direct.

“Those
Nights,” acknowledges the importance of a loved one’s support as we
reach for the stars, while the title track rhapsodizes on déjà vu and
Fate. From the sweet, orchestrally-enhanced “Without You,” to the sassy,
joyous abandon of “Alysia,” Glasmire captures moments in time and spins
them into emotionally-accessible odes to love. “Borderline” is the only
outlier here, but the dramatic Outlaw feel circles back thematically as
a dying gunman reunites with loved ones who’ve gone before him. “Feel
Your Love” grabs the listener with its desperate need, while loss and
regret are the targets of “Gone Too Soon” and the haunting “This Too
Shall Pass.” “Deep Inside My Heart” ups the tempo – and the ante – in a
barn burner to inevitability as “Out Of The Frying Pan” outlines the
dangers found in loving too many too well. The album closes with “Thru
My Eyes,” a raw assessment of the lingering damages caused by
dysfunctional familial love – and the hope that things will someday
change.

As Fervor Coulee’s Donald Teplyske noted recently,Glasmire’s sound is hard to categorize. To describe it as a mix of the ” . . . breezy
’70s sounds like Seals, England Dan, Loggins, Crofts, Messina, John
Ford Coley,” combined with influences of The Eagles and Country
two-steppers and the “. . . poetic approach of Guy, Townes, Lyle, Gary
P.,” charged with a dose of “rock ‘n’ roll verve” doesn’t do it justice.
What CAN’T BE DENIED does
is present a wide-ranging album filled with songs that enlighten,
entertain and engage, each written – and sung – from the heart.

Since the release of his 2009 CD, LIFE GOES ON, Mark has enjoyed hits on the

MusicRow Chart and earned international acclaim with a string of #1s. His “I Like You” spent nine weeks in 2012 at the top of the Hotdisc International Chart and solidified his global fan base. He has shared
the stage with Gordon Lightfoot, Dierks Bentley, Guy Clark, Kathy
Mattea, Tracy Chapman, Jessie Winchester, Al Stewart, Bruce Robison,
Rick Vito, Verlon Thompson, Roger McQuinn, Tom Paxton, Suzanne Vega,
John Gorka, and more. Glasmire has performed at venues ranging from the CMA Music Fest to intimate night clubs, and he has toured on the national level for years. He has taken home first place honors in the B.W. Stevenson Memorial Songwriting Competition in Dallas, the Dallas Songwriters Association International Songwriting Competition and the GINA/LAWIM Songwriting Competition in Los Angeles, as well as the Grand Prize in the Country Song division of the 2010 Chris Austin Songwriting Contest at Merlefest. The Bethlehem, Pennsylvania-born artist now resides in Arlington, Texas.