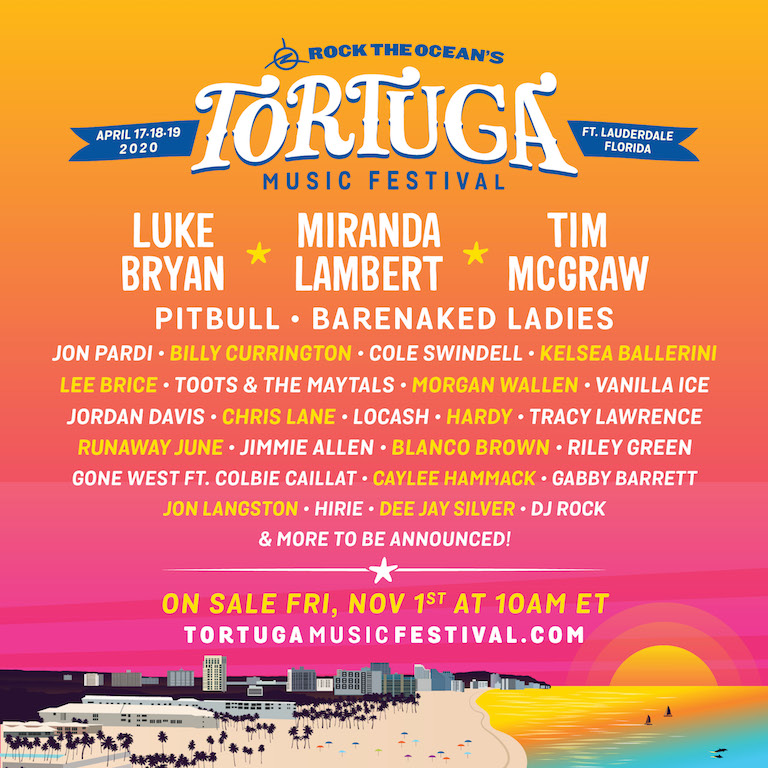 Tortuga Music Festival earned praise for its 2019 lineup being “more diverse than those of past years by several measures,” (Miami New Times)
and will continue to offer a genre-fusion of Country, Rock, Reggae and
Hip-Hop and more with 2020 acts including superstar rapper Pitbull, rock
band Barenaked Ladies, reggae act Toots and the Maytals and rapper
Vanilla Ice leading the charge. As Sun Sentinel heralds
the “festival continues to evolve beyond a point of pride for locals
into a travel destination,” fans from across the world will travel to
the southeastern shoreline to enjoy a collection of celebrated artists
on the Main Stage and Sunset Stage, as well as the most buzzed-about
newcomers in the country genre sharing their voice on the Next From
Nashville stage.

Each year Tortuga Music Festival raises funds and promotes awareness of
the issues that the world’s oceans currently face, as well as supporting
marine conservation and research. Festival guests can also learn more
about where a portion of the proceeds from their passes go onsite at the
festival at Rock The Ocean’s Conservation Village. Offering an arena of
exhibits within the festival grounds, fans can experience games,
interactive touch tanks, cooking exhibitions, the latest ocean
technology, and learn how they can help make a difference. For more
information, visit: TortugaMusicFestival.com/conservation/.