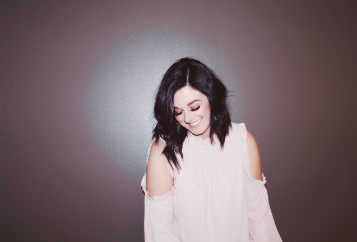 Lamitschka:  Music has many new fans
throughout Europe who may be hearing about you for the first time. How would
you describe yourself and the music you play to someone who has never seen or
heard you?

Answer:  I’m a country artist and songwriter based in
Nashville, TN.  I play everything from
fun upbeat pop country songs that everyone can dance to all the way to deep
emotional ballads that will bring a tear to your eye.  I love playing music that resonates with people,
no matter where they’re from, how old they are or what they’ve been through in
life.

Lamitschka:  How was the last year for
you? What were your highlights?

Answer:
This last year has been such an exciting year all around!  I released three songs, “Bones”, “Lips on the
Bottle”, and most recently, “Boy Crazy” – the latter two of which I co-wrote.  I also got to film a live-in-studio video
series to accompany the three singles. Seeing the songs take on a life of their
own has been such an amazing experience and they’ve opened some doors to some
really cool opportunities. I’m extremely grateful for all the love I’ve
received on these songs.  I also got to
perform in a variety of new places as well as some familiar ones and got to
meet some great new fans along the way!

Lamitschka:  Do you write the songs
yourself? If not, how do you go about finding the songs for your CD?

Answer:
I do a fair amount of writing when it comes to my own songs, but I’m also not
opposed to recording songs I didn’t write.
The best song always wins, even if it’s not one I penned myself.  My first single “Bones” was written by three
other writers in town, but when I heard it, I knew it was the perfect fit for
me!  Alternatively, I wrote the next two
singles I released.  When I listen to a
song that I might record, I listen for what I could do with it.  Sometimes the best songs that come from other
writers.  I do love the writing process
and I try to write as often as possible, so I have co-written many of the songs
I’ve recorded.

Lamitschka:  Do you have any interesting
stories about how fans have been affected by your music?

Answer:  I am part of an amazing program called
Musicians on Call, where musicians travel from room to room, playing for
hospitalized patients and their families.
It reminds me of the healing power that music has, to see people light
up over a song I’m playing in what is probably the hardest time of their
lives.  Music is such a respite for
people all around the world and volunteering with MOC has allowed me to see
that in a very real way.

Lamitschka:  As an artist, you do many
tasks such as recording, touring, interviews. What do you like best, what’s
your favorite activity?

Answer:  Truthfully, I enjoy every part of it!  I think each task is a building block and
they build off of one another.  The
recording studio feels like home to me and I love being in the vocal booth, but
there’s also nothing like the rush of being on stage.  And interviews are always a blast!  I love talking to reporters and fans alike
about music and my career path.  I also
enjoy the parts of it that aren’t so public, like interacting with fans on
social media, writing new songs and listening to song demos.  There’s not one part that’s my favorite over
any other, but I also don’t dislike any of it.
It’s all fun!

Lamitschka:  Is there any place you
haven’t played that you would like to?

Answer:
Like all country artists in Nashville, I can’t wait to play the Opry and the
historic Ryman Auditorium, but I would also love to do an entire European tour
and play at venues both small and large.
It would be a dream to play the Columbia Theater in Berlin and the O2 in
London!

Lamitschka:  What can your fans expect to
see when they see you in concert?

Answer:
Our show is really high energy!
Fans can expect to dance a lot and sing along to my songs and some
really cool covers as well!  I love for
my shows to be highly interactive so that every fan feels like they’re a part
of the show.  I also try to stick around
after shows to say hello and meet some of the fans who have come to the show.

Lamitschka:  Many music fans today get
their information about artists online. Do you have your own website and what
will fans find there?

Answer:
I do have my own website!  It’s www.livcharette.com.  Fans can find all of my music videos along
with links to my songs, my social media as well as a bio that has a bit more info
about me and how I got started in music. They can also find out when I’m playing
in their town on the website!

Lamitschka:  What’s the best compliment a
fan has ever given you?

Answer:
For me, the highest compliment from any fan is seeing them sing the words to my
songs.  I am the happiest when I see
people singing along at shows or posting things on Instagram and Facebook of
them singing my songs.  It means a lot
that people like the songs enough to learn them and sing along!

Lamitschka:  What message would you like
to send your European fans?

Answer:
Thanks for the bottom of my heart for tuning in and listening to my songs!  I appreciate every single one of you who has
taken the time to listen to a song or watch a video or send a message to
me!  I can’t wait to get over to Europe
to play some really cool shows!  Stay
tuned!