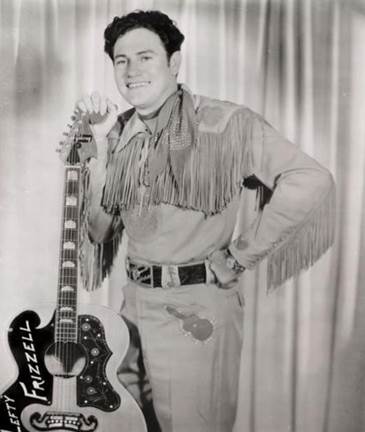 The festival is established, in cooperation with the city of Corsicana, to honor the enduring musical legacy of
Lefty Frizzell, one of American music’s most iconic and influential singer/stylists of any genre. Lefty, who would’ve turned 90 this year, was a member of the Grand Ole Opry, and was inducted into the Country Music Hall of Fame in 1982. A star on the
Hollywood Walk of Fame honors his contributions to entertainment.

David Frizzellis the younger brother of Lefty. He toured with Lefty in his youth, before being signed to a record deal of his own, and going on to a multi-award-winning career that remains dynamic today. David is a singer, songwriter, touring performer, producer and author.

A chance meeting with Corsicana Chief of Police, Robert Johnson, set the wheels in motion for David Frizzell’s longtime dream of a festival to honor his world-famous brother.
Johnson, arguably the only SAG-AFTRA actor in the world who also happens to be a police chief, is an avid fan of Lefty Frizzell, and was instrumental in the early planning for LeftyFest.

“I am so grateful to the city of Corsicana, Chief Johnson, and the good folks at The Moontower at the Oaks,” David says. “Without their support and enthusiasm, we wouldn’t
be able to host this festival. It has been a dream and a goal of mine for many years, and I am so excited to honor my brother, and give the gift of a free festival to country music fans in Texas and from around the world.”

Lefty Frizzell has been called “the honky-tonk archetype.” His voice was golden; he wore fringe and Nudie suits and those trademark bandanas; and he had a fondness for women
and whiskey. Before this became a Hollywood stereotype, it was the real Lefty. Born William Orville Frizzell, this year marks 90 years since the birth of this legendary singer, just outside of Corsicana, Texas in 1928.

Frizzell burst onto the music scene in 1951 and had had eight top 10 hits in that year alone. At one point, Frizzell had four songs in the Billboard Top 10 at the same time,
something that had never happened before: “I Want To Be With You Always,” “Always Late (With Your Kisses),” “Mom And Dad’s Waltz,” and “Travelin’ Blues.”

As a singer, Lefty was the ultimate stylist. His voice was an instrument that he played brilliantly: stretching out or breaking up vowels. He slurred his words and played
with phrasing. His pioneering vocals have inspired decades of artists, and his songs have become classics and beloved standards. Merle Haggard revered Lefty Frizzell, and was often quoted praising the singer. Willie Nelson loved Frizzell’s songwriting so much
that he released an album of Lefty cover songs.

On July 19, 1975, Lefty suffered a massive stroke, slipped into a coma, and passed away at just 47 years old. In his all-too-short life, however, Lefty Frizzell revolutionized
country music with a style that remains influential today. Artists like Blake Shelton, Randy Travis, Keith Whitley, Tim McGraw, and even George Jones, have tipped their hats to Lefty for his inspiration.

LeftyFest is set to begin at 2pm on June 16th with live music from 4-10pm. Visitors may enjoy the historic Pioneer Village, activities for kids, a classic car
show, a variety of vendors, beer gardens, and of course, great live music. The free event is made possible by presenting sponsor,
The Moontower at the Oaks of Corsicana. A variety of lodging options are available in and around Corsicana, including brand name hotels and RV parks.