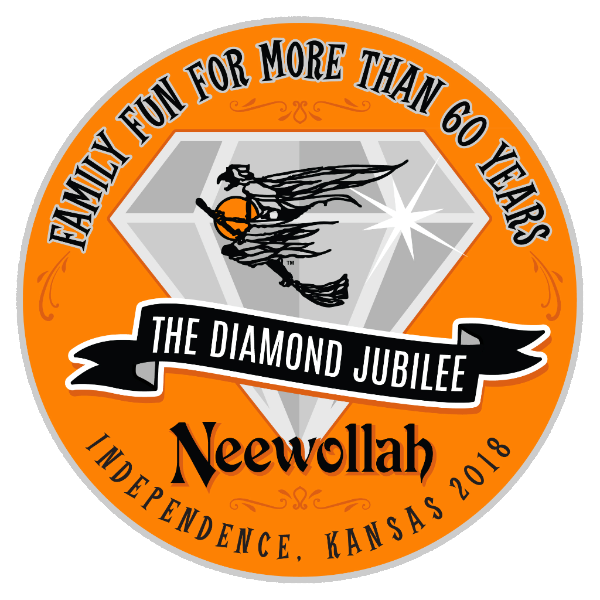 Neewollah
was revived into a multi-day celebration in 1958 by legendary music
impresario and Independence, Kansas native, Jim Halsey, along with Jerry
Webb, Bob Wohltman, and Don Dancer. The first Neewollah celebration
actually dates all the way back to 1919 as an effort to provide positive
activities for kids of all ages in place of the typical Halloween
pranks that occurred in the community. In the beginning the events
centered on parades of decorated cars and carriages during the morning,
afternoon, and night on October 31.

Today,
Neewollah is the largest annual celebration in Kansas. The city of
Independence will grow from a town of just under 10,000 inhabitants to
75,000 in the final days of the now 10-day celebration. Today’s
celebration now includes 3 parades, a Doo Dah Parade (adult Kiddie Parade), a Kiddies Parade and a Grand Parade.
Other activities include a chili cook-off, a hometown musical, and a
queen’s pageant also adds to the festival activities. The main downtown
is filled with a variety of food vendors, a large carnival and bandstand
for nightly entertainment. The arts and craft show, the band
competition, and the fun run provide activities for everyone.

The Neewollah Festival will conclude on Saturday, October 27 with the Grand Parade,
featuring the festival’s co-founder Jim Halsey as the Grand Marshal,
followed by a concert that evening with iconic Country music star, Lee
Greenwood, along with Americana performer Kyle Dillingham at Memorial
Hall. This will mark Lee Greenwood’s third appearance at the Neewollah
Festival.

Grammy
award winner Lee Greenwood has more than 30 albums to his credit, seven
#1 songs, 25 charted singles, and a CMA Song of the Year award in 1985
for his most recognizable, and patriotic song, “God Bless the USA.”
Other hits from him include “It Turns Me Inside Out,” “ Ring on her
Finger Time on her Hands,” “She’s Lying,” “ I Don’t Mind the Thorns if
You’re the Rose,” “Dixie Road,” “Somebody’s Gonna Love You,” “Going,
Going Gone,” “You Got a Good Love Comin,” “Fools Gold,” and “ Mornin’
Ride.”

Also
joining on the stage that evening will be Oklahoma’s official musical
ambassador and fiddle extraordinaire, Kyle Dillingham and his band,
Horseshoe Road. Dillingham is a classically trained fiddle player who
first picked up a violin when he was just nine years old. Eight years
later, he gave two featured performances at the Grand Ole Opry in
Nashville. Together, Dillingham and his band have represented America
internationally in 37 countries. More recently, Dillingham was nominated
by the National Endowment for the Arts to officially represent the
United States in the NEA’s American Music Abroad program, and performed
at the NEA’s awards banquet in Washington D.C. on September 28. This
rare opportunity was a huge honor as Kyle Dillingham also paid homage to
famed clothing designer, Manuel Cuevas at the ceremony. Kyle, who often
wears suits designed by Manuel on stage has formed a friendship and
deep respect for Manuel since their first visit together. On stage,
Dillingham performs a mix of his band’s original songs, along with
classic covers and fiddlin’ favorites that are sure to have audiences on
their feet.

The
Neewollah (“Halloween” spelled backwards) celebration began in 1919 as
an effort to provide positive activities for kids of all ages in place
of the typical Halloween pranks that occurred in the community of
Independence, Kansas. In the beginning the events centered on parades,
morning, afternoon, and night on October 31. The parades consisted
mainly of decorated cars and carriages. Queens and princesses from area
festivals rode in the parades, along with their own Queen Neelah
who was selected based on votes bought at a penny each. The Great
Depression and World War II interrupted the Neewollah celebration but in
1958 four businessmen revived and elaborated on the Neewollah theme
bringing it back as a 3-day celebration featuring big-name music and
recording stars.