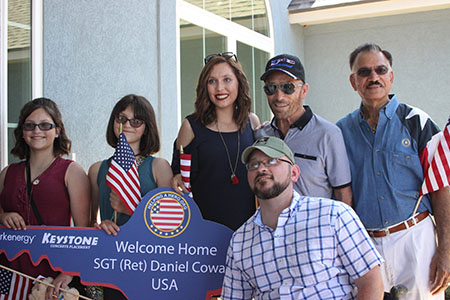 May 13 was also Sergeant Cowart’s 10th anniversary of his alive date
where he lost his left leg to a suicide bomber in Iraq during his time
serving in the War on Terror. In addition, Cowart suffered nerve damage
to his right leg and hearing loss in both ears, which makes it more
difficult for him to perform basic daily functions.

Having awarded over 100 homes in 22 states for wounded veterans,
Helping A Hero partnered with Keystone Concrete to design a beautiful
four bedroom, two-and-a-half bath home that is fully wheelchair
accessible. It features wider doors and hallways, a roll-in shower,
roll-under sink, and adapted toilet area to make daily life easier for
Sergeant Cowart and his caretaker and wife, Sarah.

Cowart is currently working on his college degree and wants to work
with other wounded veterans to assist with their recovery. He believes
sharing his story and encouraging other wounded warriors to press
through the pain and challenges of recovery will help each of them
transition to civilian life more successfully. He credits his wife and
their twin 11-year-old daughters, Alyssa and Avalon, with being the
source of his strength in his recovery.

These homes would not be possible without the generous support of
sponsors. Keystone Concrete donated materials and labor from start to
finish of the home’s design process. Spark Energy donated electricity
for the home for an entire year. The home’s furniture is being
discounted by Rooms to Go and funded by Rotary District 5890. Rudy’s BBQ
donated a lunch following the Saturday Welcome Home Ceremony.

Learn more about the Helping A Hero Wounded Hero Home Program at HelpingAHero.org. To make a difference in lives of heroes like Sergeant (Ret.) Daniel Cowart, visit www.HelpingAHero.org/Donate.

About Helping A Hero
Founded in 2006, Helping A Hero provides support for military
personnel severely injured in the war on terror by providing specially
adapted homes for qualifying service members through partnerships made
with the builders, developers, communities, and the wounded warriors.
Helping A Hero strives to engage the community in providing services and
resources for our wounded heroes and their families. Additionally, the
nonprofit organization provides additional support programs such as
marriage retreats, caregiver retreats, recreational activities,
emotional support, and financial support.

Through the generosity of patriots across the nation, Helping A Hero
has awarded over 100 homes in 22 states since 2006. These adapted homes
promote a successful transition from military to civilian life and allow
wounded veterans to regain some of their lost independence. Helping A
Hero adapted homes are not free. The homes are typically valued around
$250,000 and the veterans have a minimum $50,000 mortgage. In addition,
the veteran commits to reside in the home for at least 10 years as
his/her primary residence.

More information on Helping A Hero can be found at www.helpingahero.org.