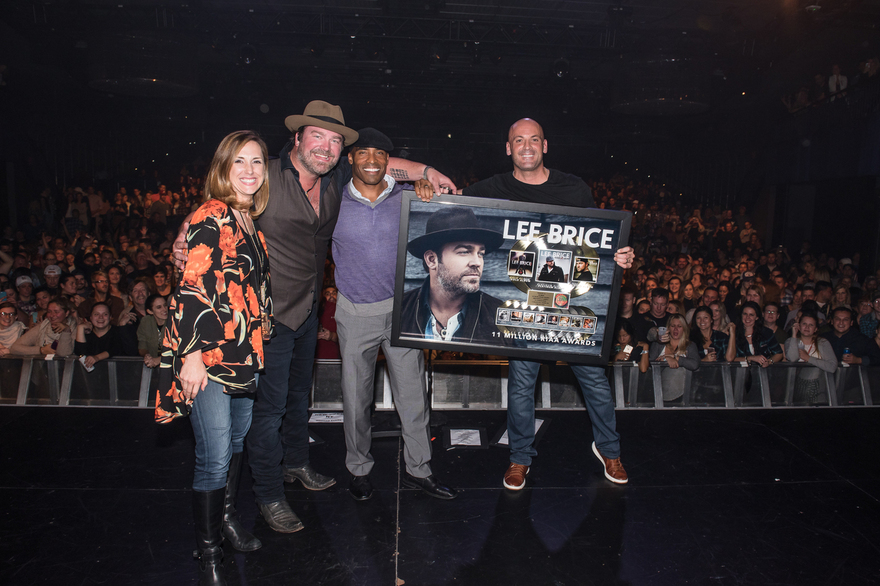 (Nashville, Tenn.) October 31, 2017 — With a new, self-titled album
out on Nov. 3 (Curb Records), Lee Brice was surprised with a career
sales milestone last week while on stage at the sold-out Playstation
Theater in New York City.

Tiki Barber and Brandon Tierney (CBS Radio’s “Tiki + Tierney”)
joined the RIAA’s Cara Duckworth on stage with a custom-made plaque that
showcased his career Gold and Platinum highlights, including eight
singles that are Gold or higher plus two brand new GOLD album awards for Love Like Crazy and his most recent album, I Don’t Dance.

What does this all mean? It means that every one of Lee’s albums is
now officially certified Gold or higher, and he has reached the rare
milestone of more than 10 million Gold and Platinum career awards.

“It is truly a rare feat for any artist to hit the pinnacle 10
million awards mark, and it only shows what a hit machine Lee is. We
look forward to more great music from this talented artist!
Congratulations!” said Cara from stage last Thursday evening (Oct. 19).

Lee will continue to tour in support of his new, self-titled album
out November 3. You can catch him on NBC’s TODAY November 8th and on the
CMA Red Carpet that evening.

For an updated list of tour dates, please visit http://www.leebrice.com/tour.

When Lee Brice isn’t selling-out arenas, writing and recording
songs or building a new brand like American Born whiskey — you’ll find
him with his wife Sara, two young boys Takoda (9) and Ryker (3), and new
daughter Trulee Nanette, born in June. Lee’s new single, “Boy,” is a
tribute to his sons who appear in the song’s endearing music video,
viewable here.

With 11 million in RIAA certified sales — each of Lee’s albums has
been certified Gold: Love Like Crazy (2010), Hard2Love (2012) and I
Don’t Dance (2014), with “I Don’t Dance” holding a double-platinum
certification for single sales. Lee is a GRAMMY nominee, a CMA and ACM
award winner and he’s taken five radio singles to #1:  “A Woman Like
You,” “Hard To Love,” “I Drive Your Truck,” “I Don’t Dance,” and
“Drinking Class.”  Garth Brooks, Jason Aldean, Kenny Chesney and others
have recorded his songs, and he’s performed on NBC’s Today, ABC’s The
Bachelor and The Late Show with David Letterman.

The New York Times says he’s an  “evocative” vocalist and USA Today
calls him “one of the finest singer-songwriters country music has to
offer.”