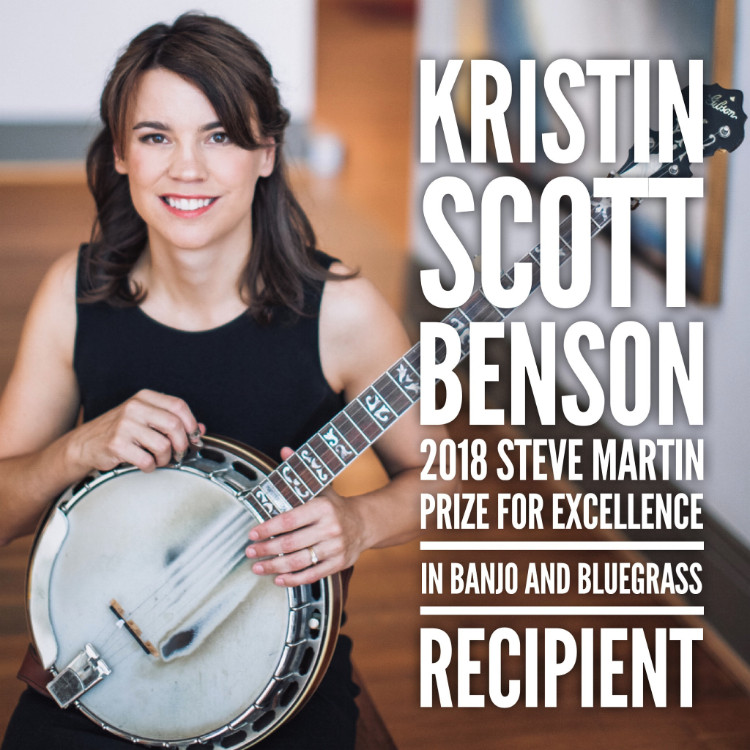 Kristin Scott Benson, of the Grascals, is the 2018 recipient of the
Steve Martin Prize for Excellence in Banjo and Bluegrass. The award was
founded by actor, comedian, and musician, Steve Martin, and is meant to
bring national attention to those who are masters of the banjo. Funded
by the Steve Martin Charitable Foundation, the award includes a $50,000
cash prize and an original sculpture from Eric Fischl.

Kristin Scott Benson is a veteran banjo
player from South Carolina. She is a four-time International Bluegrass
Music Association (IBMA) Banjo Player of the Year, a five-time Society
for the Preservation of Bluegrass Music in America (SPBGMA) Banjo Player
of the Year, and is celebrating ten years as a member of the
Grammy-nominated bluegrass band, The Grascals. A graduate of Nashville’s
Belmont University, Benson has previously performed with Larry Cordle
& Lonesome Standard Time, The Larry Stephenson Band, Petticoat
Junction and more.

For over a decade, Kristin has remained
one of bluegrass music’s premier banjo players, quickly tossing the
ill-advised “pretty good for a girl” caveat aside.

“There was one grass ceiling 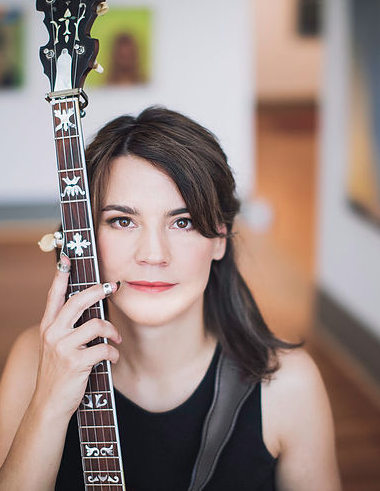 no woman could cut through—until Kristin Scott Benson came along, that is,” said Larry Nager in a 2010 issue of Bluegrass Unlimited
magazine. “Almost two years ago, she joined The Grascals. Not to front
the band, not to sing, not to be eye candy, but instead to drive the
group with her five-string banjo. Until then, no woman had ever been
hired to play one of the most defining of the bluegrass instruments in
an A-list, festival-headlining, all-male band….It’s a high profile gig,
as Kristin takes the banjo where no woman has taken it before.”

A banjo hero to pickers male and female
alike, she is known above all as a hard-working, generous, humble and
kind human being, whose love for the banjo is only topped by her love
for people. She resides in South Carolina with her husband, Wayne, and
their son, Hogan.

“My family and I
are overwhelmed with gratefulness! Getting to know my banjo heroes,
many of whom are on the board, is prize enough, but Steve Martin’s
graciousness is a huge blessing. We don’t know how to adequately say
thank you for something like this!” — Kristin Scott Benson

2018 has already been an exciting year
for Benson. She served as an instructor Kristin seeks to win her fifth
Banjo Player of the Year award from the International Bluegrass Music
Assocation this Thursday, September 27th during the International
Bluegrass Music Awards Show in Raleigh, North Carolina. She and The
Grascals are also nominated for Instrumental Recorded Performance of the
Year for their tune, “Lynchburg Chicken Run.”

The Steve Martin Prize for Excellence in
Banjo and Bluegrass is voted on by a panel of experts in the field,
which includes banjo masters J.D. Crowe, Bela Fleck, Tony Trischka, Noam
Pikelny, and Steve Martin, among others.

Learn more about Kristin Scott Benson at www.ksbbanjo.com. More information about the Grascals can be found at www.grascals.com.