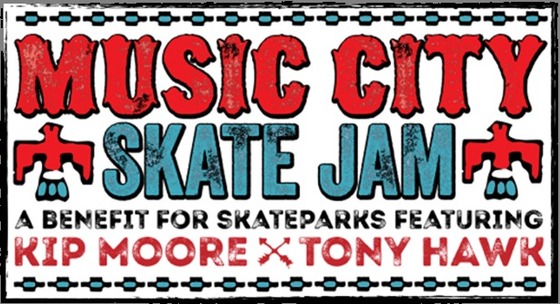 Fundraising Event Will Offer Performances By Moore, Jordan Davis And Dee Jay Silver As Well As A Skate Demo By Hawk

Nashville,
TN – Aug 15, 2017 – Multi-PLATINUM singer/songwriter Kip Moore has
teamed up with international skateboarding champion Tony Hawk,
announcing “MUSIC CITY SKATE JAM PRESENTED BY HARLEY-DAVIDSON,” set
to take place at Music City Walk Of Fame Park in Nashville, TN on 9/10.
With a shared outlook running through Moore’s “Kip’s Kids Fund” and
Hawk’s “Tony Hawk Foundation” with the goal of benefiting and empowering
youth, the family-friendly event will raise funds for both initiatives.
The fun-stacked day will also offer a skate demo by Hawk as well as
performances by red-hot newcomer Jordan Davis, Dee Jay Silver keeping
the party going and will close out with a set by Moore.

“I
think what’s always driven me at my core, throughout my career, was to
one day have the capability to make a major impact in inner cities
around the country,” said Moore. “I was never a true skater, but always
admired the brotherhood of the skating community. Having a chance to
team up with a guy like Tony, who’s so respected for all he does, is
beyond what I could’ve imagined. I’m super stoked to combine what we do,
as we both share similar visions.”

“The
Music City Skate Jam is the first event of its kind, bringing
skateboarding and country music together,” said Hawk. “I’m excited to
show Nashville an unprecedented display of talent, including some of the
world’s best skaters and Kip Moore himself.”

“Harley-Davidson
has always been passionate about supporting programs that benefit our
nation’s youth,” said James Newton, Head of US Events for
Harley-Davidson. “Partnering with Kip’s Kids Fund and Tony Hawk
Foundation on this unique event was a perfect fit.”

Multi-PLATINUM
singer/songwriter Kip Moore recently announced that his upcoming third
studio album on MCA Nashville, SLOWHEART will be released on Sept. 8.
Co-written by Moore, his current Top 15 single and the lead track “More
Girls Like You,” is the fastest rising single of his career so far and
is receiving praise from critics such as Entertainment Weekly
declaring he “has made a name for himself weaving vignettes of
Southern, blue-collar life and love into rollicking country anthems.”
The release of “More Girls Like You” follows the acclaim that surrounded
his sophomore album WILD ONES heralded as “an impressively singular
release from Music Row” by The Guardian. Moore
first turned heads with his debut album UP ALL NIGHT which was
certified GOLD by the RIAA and spawned three No. One hit singles
including GOLD certified “Beer Money,” PLATINUM certified “Hey Pretty
Girl,” and the DOUBLE PLATINUM breakout hit “Somethin’ ‘Bout A Truck.
Moore’s “Comeback Kid Skatepark Project” raising funds for “Kip’s Kids
Fund” was born as a passion project, with the goal of finding an outlet
to showcase Moore’s love for the alternative sports lifestyle, and his
desire to help inner city children. Phase one cities of the project
included building and developing skateparks in Nashville, TN; Boston,
MA; San Marcos, TX; Cincinnati, OH and Annapolis, MD. The “Comeback Kid
Skatepark Project” is the first initiative of “Kip’s Kids Fund,” a
donor-advised fund through The Community Foundation of Middle Tennessee
(CFMT) focused on youth and teens. As a result, the “Kip’s Kid Fund”
provides alternative outlets for youth to engage in healthy habits and
physical activities like skateboarding, in addition to the traditional
sports offerings where they live. For more information visit:
http://www.kipmoore.net.

A charitable,
non-profit organization, the Tony Hawk Foundation was established in
2002 by its namesake, professional skateboarder Tony Hawk. THF promotes
and provides technical assistance and funds for high-quality public
skateparks in low-income areas throughout the United States that promote
healthy, active lifestyles, and to International programs that enrich
the lives of youth through skateboarding. Domestically, the foundation’s
Skatepark Grant program has awarded over $5.7-million to 588
communities in all 50 states. The foundation focuses on working with
local officials and grassroots, community-based organizations that plan
to hire designers and contractors with strong experience designing and
building skateparks. The foundation’s International Program has provided
financial and technical support to assist youth through the Skateistan
educational programs in Afghanistan, Cambodia, and South Africa
(www.skateistan.org). The Tony Hawk Foundation was established by a gift
from Tony Hawk. Its directors raise additional funds through events,
industry donations, and continuing contributions from Tony and other
entities. For more information or to make a donation, visit the
foundation’s Web site at www.tonyhawkfoundation.org. You can also visit
THF on facebook and Instagram @tonyhawkfoundation, and on Twitter @THF.