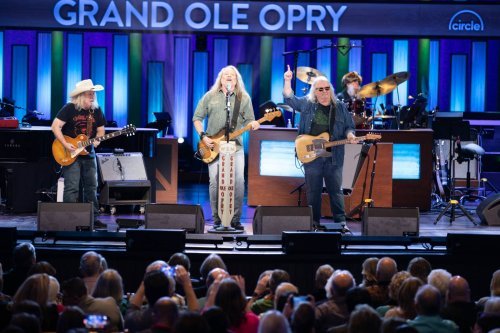 Grammy Award-winning southern rock, blues and country group The Kentucky Headhunters have officially made their debut on the stage of the Grand Ole Opry.

That has to be a misprint, surely. Three decades at the top of their game and it wasn’t until December 2021 that the Headhunters made it to the Opry? Well, it might be hard to believe but yes, it’s true.

However, they almost played the Opry way back at the beginning of the band’s climb to stardom.  Apparently, bluegrass icon Bill Monroe was impressed with their debut album, Pickin’ on Nashville, and suggested that the Opry invite them to appear. In an interview with the Nashville Tennessean, Headhunters co-founder Richard Young said, “I wasn’t there, [but] it was said that Roy Acuff said, ‘They’re probably pretty good boys. They’ll do a fine job, but let’s get ’em a haircut first.”

Much as they would have loved to appear at the Opry, those long-haired country boys weren’t about to get a haircut, even for Mr. Acuff.  They weren’t asked again – at least, not for thirty years.  They finally stepped onto the Opry stage as 2021 drew to a close, long hair still uncut but a little greyer than it used to be.

On a personal note, I have known the Headhunters, my fellow Kentuckians, since their very early days and we remain friends to this day.  In fact, Doug Phelps and I were both members of the Barren River Region FFA (Future Farmers of America): I was in the Edmonson County section while Doug was with Metcalfe County. I remember them from college days at Western Kentucky University (WKU) and the alt-country club called Picasso’s in Bowling Green, KY.

Appearing at the Grand Ole Opry was an event that the band described as “overwhelming.”  Guitarist and vocalist Richard Young explains:

“Living just north of the Grand Ole Opry in Edmonton, Kentucky, I guess we never completely understood how fortunate we were to have such a monument of American history at our back door and that folks travel worldwide to come and be a part of the Opry experience. It’s kind of like folks who live in New York City who have never visited the Statue of Liberty. That all changed for The Kentucky Headhunters the moment we arrived and stepped off our bus. From the time we entered the Grand Ole Opry, everything became very electric and almost surreal! Meeting all the wonderful folks who work there and their help to make our Opry debut a one-of-a-kind experience, as well as the Opry crowd’s response to our performance, was nothing short of overwhelming. I must say the cherry on top was to see how proud our family and friends were of us to accomplish this wonderful milestone in our musical career. We kinda felt like Dorothy when she landed in Oz!”

During their set, the Headhunters performed “Dumas Walker,” “Stumblin,'” and their new Christmas tune, “Let’s All Get Together and Fight.” They left the stage to a standing ovation.

Grand Ole Opry member Ricky Skaggs, who also performed on the Saturday night show, was thrilled for his fellow Kentuckians.

“It was such a joy to be with my friends The Kentucky Headhunters for their Grand Ole Opry debut last Saturday night,” says Skaggs. “They did great and received a standing ovation. I’m sure they will be back again soon.”

In October, the Headhunters released their first album of all-new material in half a decade. The twelve-track compilation, That’s A Fact Jack!, is available now via Practice House Records (distributed by BFD). The album is available to stream/download now HERE https://orcd.co/kentuckyheadhuntersthatsafactjack

The Kentucky Headhunters have been described as “the great American rock ‘n’ roll band” by Billboard.  They began their professional journey in 1968 when brothers Fred and Richard Young and cousins Greg Martin and Anthony Kenney formed the southern blues-rock band Itchy Brother. The band later became The Kentucky Headhunters. Their first album from the early ’90s, Pickin’ on Nashville, was released by Mercury Records and surprised the world, becoming a bona fide hit, selling over two million copies. The album won a Grammy Award, three CMA Awards, an American Music Award and an ACM Award. It spawned four consecutive Top 40 country hits: “Walk Softly on This Heart of Mine,” “Dumas Walker,” “Oh Lonesome Me,” and “Rock ‘n’ Roll Angel.” The Kentucky Headhunters are Richard Young, Fred Young, Greg Martin and Doug Phelps. To date, the band has sold over eleven million records worldwide.

For more information on The Kentucky Headhunters, visit http://www.kentuckyheadhunters.com.