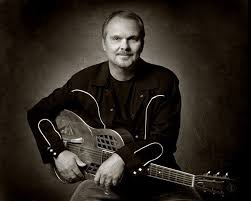 Answer:
I am a solo singer/songwriter who also does shows with my four piece
band. I grew up in the 60’s so I love all kinds of music. My music has
country, rock and roll, bluegrass and blues influences and that’s what
comes out in my writing. Folks in Europe may know my song “If Tomorrow
Never Comes” as it was an international hit for Ronan Keating.

Answer: THE
last year was amazing. It started off in January doing a show at the
famous Bluebird Cafe in Nashville with Garth Brooks. In May my band went
to France to play for a wedding party in a chateau & then I did a
solo gig at some old ruins from the 12th century for the wedding
itself. I traveled around America doing singer/songwriter show & band
shows and in November of 2017 I recorded a new record with my band at
Garths studio.

Answer:
It’s doing great I have a song on it called GOODBYE TOM PETTY and Tom’s
biographer heard it and it getting around to folks. Also another song
about the demise of Nashville Music Row called WHERE THE HELL DID MUSIC
ROW GO is being used by the Nashville Historic society & Legendary
songwriter Bobby Braddock posted it on Facebook with a picture from when
he moved to music row in the 70’s.

Answer:
I’m interested in the humility that comes with
describing life and living through the vehicle of music.

Answer:
I wrote all the songs on the SONGWRITER record by myself as I had
things I wanted to write about that no one else would be interested in
writing, On all my other  7 records I have co-written most of the
songs. The only outside song I have covered was IN MY LIFE by the Beatles

Answer:
I was born in Woodstock New York home of the famous festival and then
moved to Kentucky. Woodstock gave me the folk music & rock and roll
influence and Kentucky gave me the country and Bluegrass. The new album
is eclectic. It starts off with a songwriter song ,the  next track a sort
song, then there’s  Bluegrass, the next one is R&B love song 2
tracks later is the rocking Tom Petty song, then a country song. After
that are 2 rockers & we end with a REAL country WHERE THE HELL DID
MUSIC ROW GO

Answer:
This one is more personal about people & things I wanted to write
about. Like the song about Petty, There’s one for Townes Van Zandt and one
for Hank Cochran, one of the greatest country song writers, the R&B
song is about my wife.2 of the Rockers are about my life

Answer:
I’m all over the map. Growing up with AM radio in America you could
hear the Beatles, Roger Miller, Frank Sinatra, Motown, Buck Owens and many
other artists. These days every station plays one format but back then it
was wide-open and that’s what moves me

Lamitschka:  You did a duet with Cory Batten. How did that happen to come about?

Answer:
CORY BATTEN and I have been writing every Thursday for 10 yrs!! Unheard
of in the music bison the last record we did a duet called CUT FROM
THE SAME CLOTH. It speaks to the American people asking them to remember
we are ALL Americans and let’s find some common ground..I’m very proud
of that song..

Answer:
My favorite would have to be IF TOMORROW NEVER COMES. It was a #1 song
for Garth Brooks in 1989.10 years later I was doing a show at the
BLUEBIRD Cafe and he was living in Oklahoma. I called and left a message
on his phone saying “hey I’m playing the Bluebird tonight come sit
in” He came in 5 minutes before the show, sat down and sang all night with us. Someone recorded he& I doing a duet of the song and he
let me put it on my HAVE GUITAR WILL TRAVEL album

Answer: I have total control, I run things by other folks to get their feedback yet it all comes down to me

Answer:
It took writing hundreds of songs, learning the craft and being in the
right place at the right time. When I met Garth he had nothing going
on, we were both struggling songwriters. I was the only writer who’d a
top 5 song who would write with him.3 years later he was a superstar..

Answer:
If Tomorrow Never Comes is the one that has generated the most
stories. It has been used in weddings, funerals, graduations and we get
many letters from folks and feedback at shows with folks who have been
touched by that song

Answer:
My main 2 influences are BOB DYLAN & THE BYRDS. They shaped my
direction. Then I found Merle Haggard and Buck Owens & Gram
Parsons. My roots are deep in country and rock and roll

Answer:
the music I grew up on was mostly recorded by the whole group and
artist cutting the record at the same time. It gives human energy to
everyone creating at the same time. These days they build tracks which to
me loses the excitement due to it being one part added at time. I’d like
to see it go back to that magic of  music being created together. That’s
how I cut my records with my band .We are all IN THE ROOM

Answer: there’s always good bad and great and we still have that

Answer:
to me the best music and most diverse music was from
1964-1972.Hendrix,The Doors ,The Beatles, Stones Eagles..No one told them
what they should play, wear or do. Once the “music Industry” took over
artist didn’t have the say so on what they did. It seems it is that way
now more than ever in Nashville. I’d like to see it revert back to true
artist doing what they do..

Answer:
Playing live is my favorite thing. Especially with my band. I LOVE
playing electric guitar and turning up loud and my band gives me that
outlet

Answer:
My only borders are there are no borders, lol. I am always reaching to
do new things yet I am a product of my upbringing. To me music done by
the DOORS, HENDRIX, and BEATLES are still outside the current borders

Answer:  The biggest was meeting Garth Brooks. I had success before that yet he took it to a whole other level.

Answer:
THE BYRDS & ROGER MCGUINN’S 12 string guitar. That sound moved me to
learn to play guitar and BOB DYLAN taught me about lyrics.

Answer: The love of music and creating new songs is always an exciting adventure, looking for the next song

Answer:
Everyone who plays and sings and writes has their unique voice. No one
can do what I can do or write what I write. It’s the  same for everyone

Answer:
To me the most when you get acknowledged for writing a great
song, either through hit records ,awards or folks coming up after a show
to say the music touched them. I am so lucky that I have many of those
moments

Answer: I am, though I’m lightening up a little ha-ha.

Answer: songwriters don’t relax, their radar is always up looking for ideas, lol. I meditate that helps

Answer:
If you change one thing does it then change the way everything after
that would change. Kind of like the movie BACK TO THE FUTURE, so I don’t
dwell on that I just keep moving forward

Answer:
Paul McCartney, Mick Jagger and others are an inspiration to keep
rocking. My desire to be playing electric guitar with a band when I’m 103
years old

Answer:  Rocking with my band or singer/songwriter it’s show about the stories behind the songs I’ve written

Answer: I aim to fit that in to most of my gigs

Answer:  That I’ve touched them with my music

Answer: I would love for them to check out my records and come to shows when I’m in their area or they are in mine

Answer: I love what I do and also being able to play and sing let’s me keep creating and gigging.