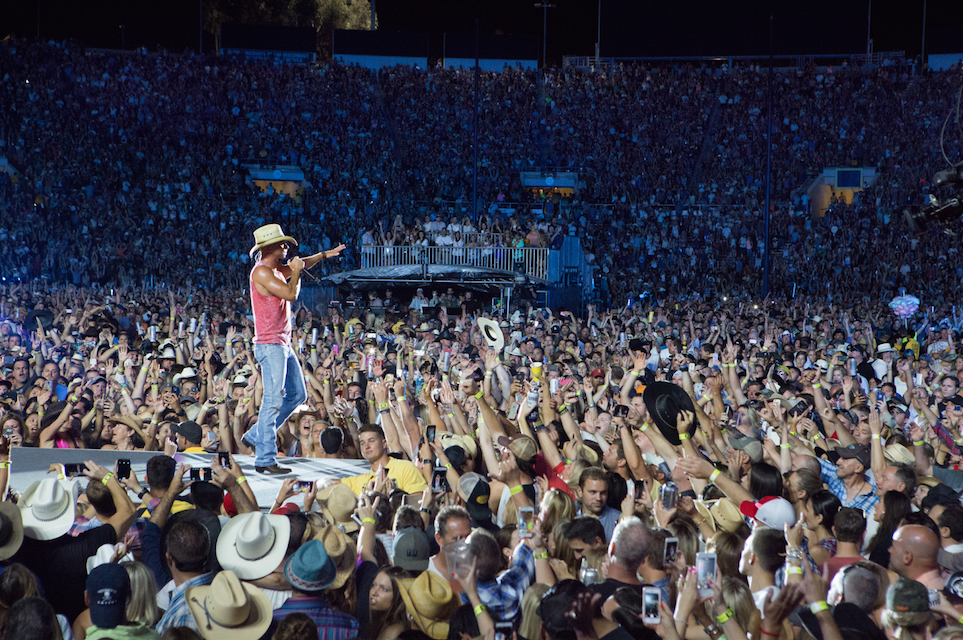 Pasadena,
Calif. (July 26, 2015) —  For Kenny Chesney, playing “The Granddaddy
of Them All” as ABC’s legendary sportscaster Keith Jackson deemed the
Rose Bowl decades ago, was a bucket list item. And when he took the
stage at the iconic venue built in 1922, he took it with all the
intensity of every college football team that played there on New Year’s
Day, the athletes at the ’84 Summer Olympics and the various teams at
the many World Cup matches that have played there.
“You know when you wake up and you see that
sign, you’re on hallowed ground,” Chesney said. “I’ve seen so many
games played there, so much history – and I understand the heart it took
from every athlete who’s ever come out of those tunnels. To stand on
that stage, I knew I wanted to try to honor all those folks who’ve come before us.”

Beyond delivering a scorching two-hour show that included his 27th No. 1 “Wild Child” and the freewheeling GRAMMY-nominated “American Kids” from The Big Revival to
a packed house, Chesney was further inspired by Keith Jackson
surprising him backstage. As Jackson presented the East Tennessean with a
commemorative brick to be placed in the Brick Walk at the South Main
Entrance and the first ever Rose Bowl Stadium jersey, it was an
emotional moment for the songwriter/superstar.

“There
is so much history just hearing that voice,” Chesney marveled. “Let
alone seeing that face: all those games, all those plays he called.
That’s the sound of me growing up! And what an honor to get to sit a bit
on the bus and talk to him about everything he’s seen… even before the
show started, I was having a pretty high-powered time.”
It’s been a big summer for The Big Revival Tour.
Chesney broke his own record at Pittsburgh’s Heinz Field with 55,381,
Green Bay’s Lambeau Field with 53,363, Philadelphia’s Lincoln Financial
Field with 54,313 and Minneapolis’ Target Stadium for the third time with 44,152.  His intensity prompted The Dallas Morning News to write “Two parts Mick Jagger, one part Bruce Springsteen and one part Billy Graham” after his Texas/AT&T Stadium show.

His
Rose Bowl set was no exception. With Reese Witherspoon, Vince Vaughn,
Ashton Kutcher and Mila Kunis on the side of the stage, Chesney played
19 songs before taking a breath – and then returned with the night’s
co-headliner Jason Aldean to play four more, including spirited covers
of John Mellencamp’s “Hurt So Good” and Bryan Adams’ “Summer of ’69.”

“Those
folks had had a long day in all that heat, but man, they were so ready
for us… ready to hear the music, to sing along, to make every single
song matter,” Chesney said. “When I dropped out during ‘Anything But
Mine,’ they sang so clear and so true, you could’ve made a record out of
it – and for me, they made a memory that will last a lifetime. To play a
place where football means so much, especially to an audience that
live, I’ll never forget it…”
With
upcoming stadium shows at Denver’s Sports Authority Stadium at Mile
High Aug. 8, E. Rutherford, NJ’s Met Life Stadium Aug. 15, Detroit’s
Ford Field Aug. 22 and a double at Foxboro’s Gillette Stadium Aug.
28-29, the man The Wall Street Journal called “The King of the
Road” will have headlined 135 stadium plays since his Washington,
DC/Pittsburgh/Boston stadium run in 2005. Having taken a year to get
ready for The Big Revival, it shows in the intensity of the shows, the fan and yes, the man from Tennessee.
Photo  Credit: Allister Ann