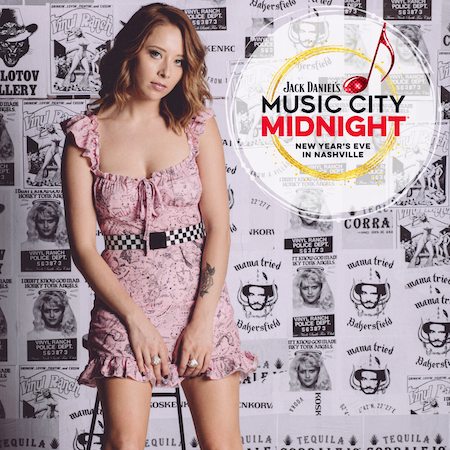 Rounding out a monumental year in her career, Kalie Shorr will join the star-studded and diverse lineup of Jack Daniel’s Music City Midnight: New Year’s Eve in Nashville, the Nashville Convention & Visitors Corp announced on Friday. She will help Nashville ring in the New Year with Keith Urban, Jason Isbell and The 400 Unit, The Struts, Amanda Shires, Bren Joy and the Fisk Jubilee Singers.

The New Years Eve show will cap off a monumental 2019 for Shorr, who’s debut album Open Book dropped in September and was recently lauded by well-respected music critic Jon Caramanica on The New York Times’ Popcast:

“One of the things I like about this record is it does have some of the raw tension that I would associate with a Miranda, but it also has some of these very, very crisp pop songwriting instincts that feel very post-Taylor [Swift], post-Kelsea Ballerini.  This album is a knock to me… very, very into it.” –  Jon Caramanica, The New York Times (via NYT Popcast, 10/11/19)

Last
year, the Nashville concert was featured on “NBC’s New Year’s Eve”
national broadcast that was live from Times Square in New York City. It
was the most successful New Year’s Eve event for Nashville with an
all-time high $23 million in direct visitor spending over 2017’s $22.3
million. Attendance was approximately 175,000 to 200,000, a record
attendance over 2015’s 150,000. Gates at Bicentennial Mall will open at 4
p.m. on Tuesday, Dec. 31 with DJ Case Bloom providing entertainment
before the Music Note is raised. The Fisk Jubilee Singers, an ensemble
of students from Fisk University, will kick off the live music with a
selection of Spiritual music. The show’s highlight will be the
traditional Music Note Drop and accompanying fireworks display to usher
in the New Year. GRAMMY-winner DJ Dave Audé also will be part of the
lineup.

Shorr emerged
in 2016 with her self-penned hit “Fight Like A Girl” and shortly after,
the Portland, Maine singer-songwriter became a Sirius XM “Highway
Find.”  Her debut album, Open Book, has been lauded by critics from NPR,
The New York Times, Rolling Stone and more. She made her Grand Ole Opry
debut in 2018 and has played the Opry 15 times so far. Shorr has toured
with Sara Evans, RaeLynn, Jimmie Allen and is spending much of December
this year supporting LeAnn Rimes’ “You And Me And Christmas” Tour.

*Opening on LeAnn Rimes’ You and Me and Christmas Tour

Kalie Shorr
burst onto the Nashville music scene in 2016 with her self-penned hit
“Fight Like A Girl.” The Portland, Maine singer-songwriter became a
Sirius XM “Highway Find” and was spotlighted by Spotify, Apple Music,
CMT, Radio Disney Country, Taste of Country, and even Billboard
magazine. In 2017, Kalie released her Slingshot EP to positive
reviews and was named “New Artist You Need to Know” by Rolling Stone,
“The New Nashville” by Teen Vogue, and one of “2017’s Hottest Artists
Under 25” by Taste of Country. Named a CMT Next Women of Country and a
“Top 10 Country Artists To Watch In 2018” by the Huffington Post, Kalie
released her last EP Awake to critical acclaim and toured with
Sara Evans and RaeLynn on the CMT Next Women of Country Tour. On March
31, 2018, Kalie fulfilled a life-long dream when she made her Grand Ole
Opry debut calling it “one of the most emotional experiences of my life”
and has since gone on to play the Opry many times. In late 2018, she
headlined the Walmart/Pepsi “Road to the CMA Awards” Tour raising
awareness for the 52nd annual CMA Awards telecast. And in November,
Radio Disney Country launched a daily radio series called “Let The Girls
Play” hosted by Kalie and fellow Song Suffragette Savannah Keyes.
Kalie’s message of female empowerment has led to praise for her “social
advocacy” [NPR] and to features on PBS NewsHour, NPR’s “Morning Edition”
and “On Point” in addition to ELLE Magazine. Kalie’s first-ever
full-length album Open Book released on September 27th with Rolling Stone saying “[Open Book]
showcases the alchemy that Shorr concocts which manage[s] to conjure
both Shania Twain, Red-era Taylor Swift, Dashboard Confessional, and
Alanis Morissette all at once.”  In addition to many other 2019 tour
dates, Kalie will support LeAnn Rimes’ “You And Me And Christmas” Tour
this holiday season.