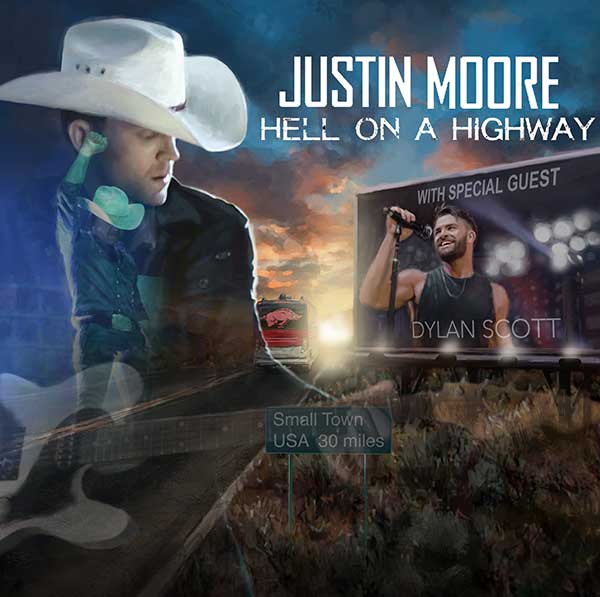 “HELL ON A HIGHWAY TOUR”

NASHVILLE, Tenn.
– Justin Moore is kicking off his highly-anticipated “Hell on a Highway
Tour” on Friday, October 13 at the Monroe Civic Center in Monroe,
Louisiana. The PLATINUM-selling entertainer will hit over 40 cities
across the US including stops in Baltimore, MD, Birmingham, AL, and
Athens, GA. Chart-topping newcomer Dylan Scott is supporting Moore
throughout the tour.

“Hell On A Highway Tour” is Moore’s fourth headlining trek and is
sure to include fan-favorites and No. 1 hits “Small Town USA,” “If
Heaven Wasn’t So Far Away,” “Till My Last Day,” “Point at You” and
“Lettin’ the Night Roll” as well as back-to-back chart-toppers “You Look
Like I Need a Drink” and “Somebody Else Will” from his current album KINDA DON’T CARE (The Valory Music Co.).

HELL ON A HIGHWAY TOUR:

A seasoned showman, Moore continues to blow the roof off venues after almost a decade of touring. The OC Register raves of a recent show “It was full-on energy” and Whiskey Riff adds “…Justin rocked the crowd’s face off…”

Moore’s latest single and title track of his fourth studio album,
“Kinda Don’t Care,” is said to “…hits the twang factor in fine
fashion,” according to Sounds Like Nashville. It recently impacted Country radio and is making its way up the charts.

Justin Moore’s long-awaited fourth studio album KINDA DON’T CARE earned
the singer his third consecutive No. 1 album debut and features his
chart-topping singles “You Look Like I Need A Drink” and “Somebody Else
Will.” His most recent single, the title track from the album, impacted
Country radio on September 18. The project is chock-full of new music
with 16 tracks on the deluxe version and skyrocketed to No. 1 on the
iTunes Country chart upon release. The Arkansas native spent three years
putting the project together, which serves as a follow up to his second
No. 1 album release, OFF THE BEATEN PATH. Moore holds seven
No. 1’s under his signature white cowboy hat including “Point At You”
and “Lettin’ The Night Roll” as well as seven Top 10 hits. The Valory
Music Co. recording artist has earned multiple ACM, ACA and ACC Awards
nominations. He has shared the stage with Hank Williams Jr., Brad
Paisley, Miranda Lambert and Brantley Gilbert and recently wrapped his
co-headline AMERICAN MADE TOUR with Lee Brice.

A Louisiana native with a lifelong passion for Country music, Dylan
Scott is the total package – a powerful singer with a deep, resonating
drawl; an old-soul songwriter with a young spirit; a heartthrob with an
easy smile; and a dreamer who followed his father’s footsteps to
Nashville. Prior to landing his record deal, Scott learned the basics of
singing and playing guitar from his dad – a former guitar player for
Country legends Freddy Fender and Freddie Hart. He then launched onto
the Country music scene in 2013 with “Making This Boy Go Crazy,” the
debut single from his self-titled EP. His follow up, the infectious
“Crazy Over Me,” debuted at #14 on the Billboard Country Digital Song
Sales chart and hit the Top 40 on the Billboard’s Country Airplay chart.
In the summer of 2016, his debut album for Curb Records, DYLAN SCOTT,
landed in the Top 5 of Billboard’s Country Albums chart, and its
romantic standout single, “My Girl,” has now been RIAA-certified GOLD,
while also becoming his FIRST CAREER #1 at Country radio. Continuing the
momentum, Scott released DYLAN SCOTT (DELUXE EDITION) on
August 4. The expanded version of his 2016 self-titled album debut
features three powerful new tracks including the addictive rush of his
new single “Hooked,” the real-life fairy tale of “Sleeping Beauty”
(which Scott co-wrote with Lee Brice) and the head-turning heat of
“Can’t Take Her Anywhere.” Having been named one of Spotify’s Spotlight
on 2016 Country Artists, fans have streamed Scott’s songs over 200
million times and counting, and sales have topped 2.2 million stream
equivalent songs – figures that continue to grow by leaps and bounds. He
is currently touring the country after wrapping his opening slot on
Brice’s 2016 LIFE OFF MY YEARS TOUR.