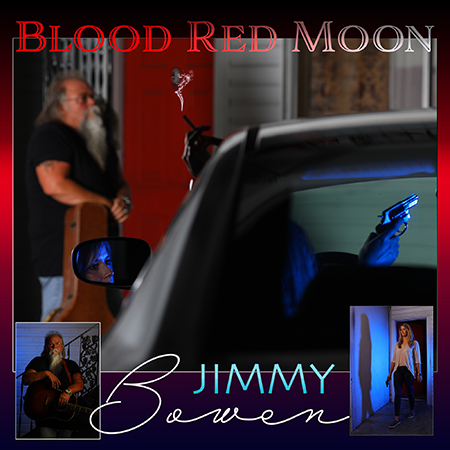 In
an age when it seems that technology has taken the place of talent, it
is both reassuring and refreshing to see a seasoned artist who continues
to have a stronghold in the music industry. Jimmy Bowen has been creating music for more than three decades and, thankfully, has even bigger plans for the future. His new single, “Blood Red Moon,”
was co-written written by Sonny LeMaire, Liz Hengber and Tommy Lee
James. The new music is available for streaming and download on all
online digital platforms here.

“My co-writers, Liz Hengber, Tommy Lee James
and I were discussing what to write and someone mentioned that in the
next few days the Nashville night sky would be filled with a blood red
moon! Boom! There was our title and we and we had a blast writing a,
sort of, southern gothic tale of cheating and revenge,” stated
songwriter and producer, Sonny LeMaire!

“”Blood Red Moon” is a great song. I chose the song because of the story
line. It is a song about love gone bad and revenge,” said Jimmy Bowen.
“The lyrics leave the mind to some imagination of the why’s and where’s.
“Blood Red Moon” is totally different than any song ever recorded and I
love the challenge of singing the song with conviction and confidence.”

“It takes teamwork to create a masterpiece and everyone did their part
to make “Blood Red Moon” something special! The band tracks on “Blood
Red Moon” were recorded at Ocean Way Studio in Nashville on a custom
“hot-rodded” Neve VRP 96 input console with engineer Ryan Yount at the
helm. The DAWg Houze, Nashville North served as  overdubbing
headquarters, adding Glen Duncan’s fiddle tracks, Steve Hinson’s dobro
and lap steel parts, Sonny LeMaire backing vocals, Jimmy’s lead vocal
tracks and final mixdown using a hybrid tracking/mixing technique on a
Soundcraft Vi3000 digital mixing console and Pro Tools via Dante in/out
of Vi3k,” shares Co-Producer/Engineering,Tony Cottrill. “The microphone
selection both at OCW and The DAWg Houze consisted of a combination of
Heil and AKG dynamics and condensers. The talent of the Nashville
sessions players on this cut, besides Glen and Steve included Michael
Spriggs on acoustic guitars, Jimmy Nichols playing Wurlitzer and Hammond
B3 organ, Erik Halbig adding electric guitars, Steve Brewster playing
drums and Sonny LeMaire on bass guitar. The final Mastering touches were
completed by Benny Quinn.”

The song is structured to so the performance can be done in any manner
and there are many options to get the story line and the point across to
the audience. This project left a wide open imagination for the cover
artwork. Using lines from the song and creating the image at a motel to
reflect the gothic feel and as the evening got darker the listener feels
as though they were somehow immersed in the song itself.

Music is available on digital music platforms for streaming on Spotify and Apple Music and download on iTunes, Amazon Music and Google Play

Jimmy Bowen has been creating music for more than three
decades and, thankfully, has even bigger plans for the future. Bowen’s
impressive tenure in Bluegrass music includes eight years with Charlie
Waller and the Country Gentlemen and more than four years with David
Parmley and Continental Divide.  While traveling with these renowned
groups, Bowen also earned multiple awards. These include IBMA Song of
the Year “Waltz of the Angels,” with Charlie Waller and the Country
Gentlemen, IBMA Album of the Year for Souvenirs with Charlie Waller and
the Country Gentlemen and IBMA Emerging Artist of the Year with David
Parmley and Continental Divide. Another creative outlet for Bowen is his
pursuit of acting and he has been cast for various series, dramas, and
commercials all while working with some of the biggest names in
television. On the horizon for this hard-working artist is a music
television show. “Creating my own ‘show’ has always been a dream of
mine,” said Bowen, “and I’m doing it online so that everyone in the
world can access it.” More details on this project coming soon. Stay
current with Jimmy Bowen on his website jimmybowen.com.