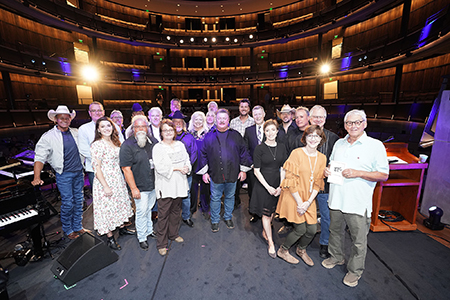 Jimmy Bowen had a successful run with Earl Thomas Conley for seven years in his band playing acoustic guitar and also played  mandolin on “Brotherly Love.” Bowen was recently honored play onstage as he joined other Artists who were fans of Conley and gathered at the CMA Theatre at the Country Music Hall of Fame on Tuesday (September 10, 2019) to pay tribute to Earl Thomas Conley. The event was hosted by Bill Cody and Devon O’Day from WSM-AM 650 who added their favorite stories of Conley.

“Earl and I talked a lot on the bus late at night. We were both night owls. What I found really comforting as an artist myself, is his outlook on the industry. He would talk about how his generation were all working for the same goal. The important thing he stressed is the fact they all sounded different. Every artist was creative in their own way and recorded songs that fit them and their vocal style,” Bowen stated as one of his favorite memories of touring and playing with Earl Thomas Conley.

Before a near capacity crowd, the group of entertainers talked about Conley’s influence on them and sang his songs. All agreed that Conley’s music had a depth to it that continues to influence country music today.

“His music and life was amazing. The band getting back together brought back so many memories of the time we spent together. We laughed, we cried, and we remembered what a great writer and entertainer Earl was. His lyrics were so real and told a story or love, happiness and occasionally sadness. He was a mentor, a friend and true country singer/entertainer. He was a musical icon and I dearly miss him,” stated Jimmy Bowen. “The tribute of his life and music was celebrated with such love, feeling and emotion, that I know he was smiling down from heaven, saying, You boys did good, as he often always did after a show.  The tribute and Earl’s music will live in our hearts forever and so will he, Earl Thomas Conley!”

Jimmy Bowen has been creating music for more than three decades and, thankfully, has even bigger plans for the future. His new single, “Blood Red Moon,” was co-written written by Sonny LeMaire, Liz Hengber and Tommy Lee James. The new music is available for streaming and download on all online digital platforms here.

Music is available on digital music platforms for streaming on Spotify and Apple Music and download on iTunes, Amazon Music and Google Play

In an age when it seems that technology has taken the place of talent, it is both reassuring and refreshing to see a seasoned artist who continues to have a stronghold in the music industry. Jimmy Bowen has been creating music for more than three decades and, thankfully, has even bigger plans for the future. Bowen’s impressive tenure in Bluegrass music includes eight years with Charlie Waller and the Country Gentlemen and more than four years with David Parmley and Continental Divide.  While traveling with these renowned groups, Bowen also earned multiple awards. These include IBMA Song of the Year “Waltz of the Angels,” with Charlie Waller and the Country Gentlemen, IBMA Album of the Year for Souvenirs with Charlie Waller and the Country Gentlemen and IBMA Emerging Artist of the Year with David Parmley and Continental Divide. Another creative outlet for Bowen is his pursuit of acting and he has been cast for various series, dramas, and commercials all while working with some of the biggest names in television. On the horizon for this hard-working artist is a music television show. “Creating my own ‘show’ has always been a dream of mine,” said Bowen, “and I’m doing it online so that everyone in the world can access it.” More details on this project coming soon. Stay current with Jimmy Bowen on his website jimmybowen.com/.

Earl Thomas Conley was a true artist in every sense of the word. He was not only a singer, entertainer and songwriter, he was also a visual artist, and was offered an art scholarship after graduating from high school.

Earl’s musical influences ran from the gospel music he heard in church and sang with his aunt and uncle to the bluegrass and country music his father listened to, including Bill Monroe, Jimmy Martin and Hank Williams. His first cut as a songwriter was “This Time I Hurt Her More Than She Loves Me” by Conway Twitty, soon followed by Mel Street’s “Smokey Mountain Memories.” In 1981 Earl had his first number one as a recording artist, “Fire & Smoke”.

Earl became a favorite at radio and was soon dubbed “The thinking man’s country artist.” The singer found his place in music history in 1984 when he became the first artist in any genre to have four number one singles off one album, “Don’t Make It Easy For Me.” “Your Love’s On The Line,” “Holding Her and Loving You,” “Don’t Make It Easy For Me” and “Angel In Disguise” all hit the top of the “Billboard” charts. Earl had 22 number one career singles, including “Somewhere Between Right and Wrong,” “Honor Bound,” “Love Don’t Care (Whose Heart It Breaks),” “Once In A Blue Moon” and “What I’d Say.” In the 1980’s he was ranked third behind Alabama and Ronnie Milsap for having the most number ones in that decade.

The singer made history again in 1986 when he recorded a duet with Anita Pointer, “Too Many Times,” and became the first country artist to perform on “Soul Train.” He also had duets with Gus Hardin, “All Tangled Up In Love;” Emmylou Harris, “We Believe In Happy Endings;” and Keith Whitley, “Brotherly Love.”

“The Essential Earl Thomas Conley” was recently released by Sony Legacy. It is available only on digital and includes a brand-new song by Earl, “Love’s The Only Voice.” (Amazon link to the album: https://www.amazon.com/Essential-Earl-Thomas-Conley/dp/B07C89VRM5)