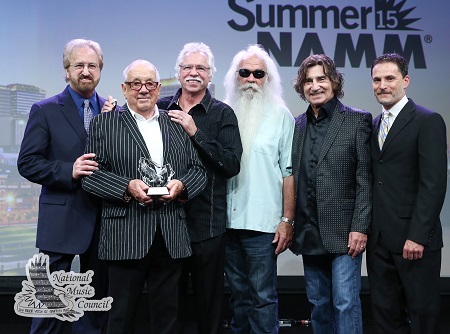 NASHVILLE,
Tenn. (July 17, 2015) – The National Music Council honored one of the
industry’s most beloved and successful impresarios July 11, at the 32nd
Annual American Eagle Awards. Country Music Hall of Fame inductees the
Oak Ridge Boys presented Jim Halsey with the award, which comes in
recognition for his lifetime commitment to music and music education.

Halsey was one of several honorees at the 32nd Annual American Eagle
Awards, which were held this year in Nashville for the first time. NMC
president Dr. David Sanders called Halsey a visionary for his
decades-long commitment to music.

“We have a tradition of honoring not only musical performers and
writers, but also music educators, supporters of music, impresarios and
producers who have shaped the music of our nation,” said Sanders. “Jim
Halsey’s ability to nurture artists, and his record of guiding the
careers of some of America’s greatest talents, has earned him a special
place among those who have made comprehensive contributions to musical
life in America.

Halsey is known throughout music as a builder of careers. He has
worked with some of the biggest names in country music history, managing
or booking acts such as the Oak Ridge Boys, Reba McEntire, Minnie
Pearl, George Jones, and even Bob Hope. In addition to managing acts,
Halsey is a published author, and his book Starmaker: How to Make It in the Music Business
is considered the textbook on a successful music career. All told,
Halsey has worked directly to shape the careers of 24 members of the
Country Music Hall of Fame. He is to be honored later this year when he
is inducted into the Oklahoma Music Hall of Fame.

In addition to his work in the music industry, he was also a teacher
of music business at Oklahoma City University, where he led the
award-winning and internationally recognized Music and Entertainment
Business Program. In 2015, the Halsey Institute began streaming its
music and entertainment business classes online, connecting students
with 40 of the most renowned experts in the their fields.

“Jim’s commitment to educating a new generation of music
professionals as a mentor in both academic and professional settings is
exemplary to all those who work for a bright future for American music,”
Sanders said.

During the NMC American Eagle Awards, the organization also honored
Halsey’s son, the late Sherman Halsey, who died in 2013. The younger
Halsey was known throughout the entertainment world as a visionary
producer and director of music videos for superstars such as Tim McGraw,
Dwight Yoakam, and BB King. Additional 2015 American Eagle Award
honorees were Kris Kristofferson, Jim Lauderdale, and Charlie Pride. A
special award was presented to the Nashville Mayor’s Office, Metro
Nashville Public Schools, and Country Music Association & Country
Music Foundation, for the creation and support of the Music Makes Us
arts education initiative.