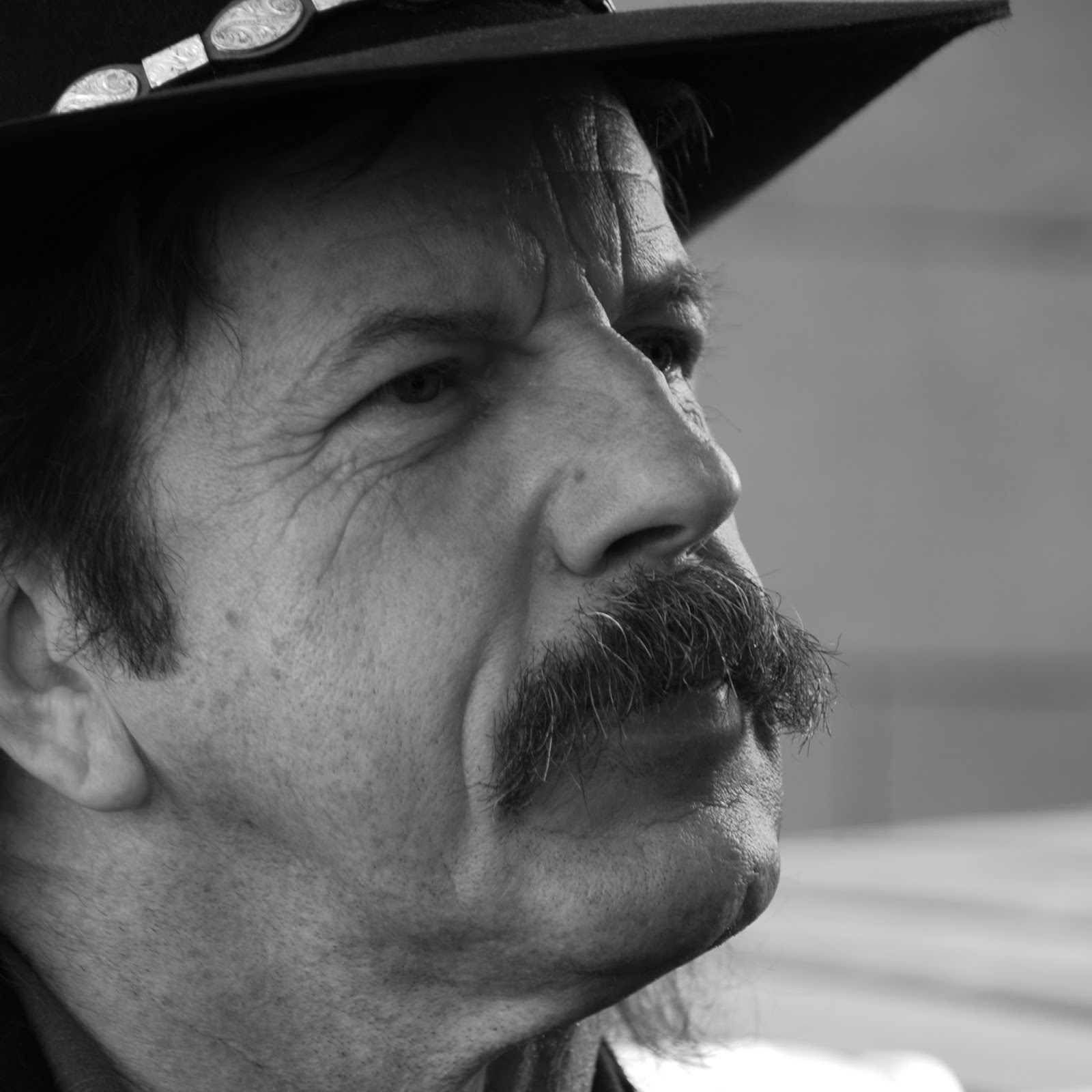 Lamitschka:  Americana music has many new fans throughout Europe who may be hearing about you for the first time. How would you describe yourself and the music you play to someone who has never seen or heard you?

Answer:
HUMM OK describing me. I am a simple man who grew up deep in the
Appalachian Mts in North Carolina in America. I grew up in a family of
musicians storytellers and moonshiners .lol I started playing guitar at
ten years old, and writing songs around sixteen.  I enjoy the simple
things in life, and do not ask for much. The music I play is mine. I do
not try to be a protege of anyone. It comes from deep roots in the
Appalachian Mountains of North Carolina, but also it is variable because
of so many styles I was influenced by.

Answer:
Last year was a blessed year for me. I toured in the UK as i have for
the past ten years, and enjoyed it thoroughly. I adopted a mini
schnauzer , recorded a new project in Nashville Tennessee, I had some
free time to spend so I visited friends in London, I spent time on the
lake in Nashville , I spent time writing new songs, and I wasnt on the
road as much as in the past so I had family time.

Lamitschka:  Tell us about your most recent album, Walk Softly.

Answer: Walk Softly I feel is the best album I have recorded until this
time at least. I and producer Pat Holt in Nashville spent  a lot of
time reviewing my catalog and there were some other songs we liked a
lot, but the ones on Walk Softly we both agreed are a very good mixture
of what I do. There are a couple of songs with a  bluegrass feel, an
song on the edge  lol called Grandma’s Are Sexy Too, a very personal
song for it is somewhat an autobiography entitled the man I used to be.
There are the best musicians on the album, the music is amazing. The
guitar work was done by the same player who played on everything Garth
Brooks recorded in Nashville, the bass player tours with top acts as
well as playing on top cuts , The fiddle player was with Bill Monroe at
only sixteen years old, and the keyboardist played with Elvis back in
the day. It was just such a thrill to work with such a high caliber of
players.

Lamitschka:  Is there a story behind the album’s title?

Answer:
Yes, When i was a young man and was married to the mother of my
children we were in an argument and I was ranting to my dad about it and
saying how I really did not care if she left etc. He said to me “Boy
You Better Walk Softly On Bridges You Are Crossing You May Want To Cross
Them Again” and years later I for whatever reason thought of that and
that is when I wrote Walk Softly

Answer:
I write all of my material and I wrote all the songs on the album with
the exception of  Daddy’s Was Purple. I wrote that along with Dale
Siegfried a Nashville Songwriter friend.

Answer:
I get ideas from songs from so many sources, and I never  know when or
where one will come from. I am a very versatile writer, and I personally
enjoy albums that are versatile.  The songs on my albums are a
collection of things that came to me most of the time unexpectedly. I
grew up playing music on the front porch of my grandfathers house on the
North Carolina/Tennessee border. My uncle hand made banjo’s ,or as we
called them in the mountains “banjers” my grandmother played the
wash-board, my father the harmonica and grandpa Ben Harmon played the
jug once he got it empty. I started on the guitar when I was around ten
years old. I learned songs from Maybelle Carter and her daughters,, ie..
The Carter Family as well as Uncle Dave Macon, BIll Monroe,Ralph and
Carter the Stanley Brothers, JIm and Jesse with the Virginia Boys, and
having older siblings I was also listening to Cash, Jones, Haggard as by
my teen years I was listening to the awesome Rock and Roll of the mid
to late Seventies. I think that is why my writing covers such a vast
area.  The song Man I Used To Be on my latest album Walk Softly is
actually a true story, and a song that means a lot to me, for it is
about someone who is living the exact lifestyle I did in my days of
active addiction.  Grandmas Are Sexy Too is a song about the beautiful
women on earth who are no longer 18 -35.  Love In The House is a song
that almost anyone who grew up in a loving family who did not have a
great amount of money. Daddys Was Purple is a tribut to  the people who
risk their life’s for our freedom. Whos Mind Was Made is a bluegrass
style song. Want To Come Home refers to the life on the road when the
perfomer is getting older and tired and wants to be home with the one
they love. There are videos to Man I Used To Be and Want To Come Home.
One was shot in Nashville and the other in Germany, and that was a lot
of fun.

Answer:
I love writing and I love recording the songs I write, and it is hard
to say what my favorite is. I think the driving s25ongs maybe, and  that
is because I  have more fun singing them

Lamitschka:  What is your favorite song among all the songs you have recorded and what’s the story

Answer:
My favorite that I have written is Walking To Cleveland, and that is
because of a child hood memory. I remember watching my Grandpa plow a
mule in Tennessee, and he would sometimes stop a
moment take his hat off wipe his brow and stare at the mountains. That
was the furtherest point he ever saw, because he never traveled, and did
not drive. That is the image that created Walking To Cleveland

Answer: As much as I
want for it is my music of course, but I realize the ability of
producers such as Pat Holt who has recorded Cash, Dr Hook, James Taylor
and many well known artist, and I allow the producer to do his job, but I
do have input into it if I want hear something in my head I want on the
track.

Answer:
There are so many artist from the past that inspired me, and there
still are. I get inspiration from everyone that I enjoy their music.
When I was a child I was really inspired by bluegrass artist, country
artist and rock artist , and it is really impossible to say any one
artist that inspried me more than others, but if I were to have to pick
from various styles it  would probably be Lynyrd Skynard, Cash, and
Ralph Stanley.

Lamitschka:  What do you think about today’s music scene versus its post and where do you see it

going in the future?

Answer:
I  admre the amount of talent and ability of all
musicians/writers/singers who have worked hard and still do. I do not
think the commercial music of today is anywhere as versatile, personal ,
individual idenity is rare. It is all cookie cutter mass production. We
do not have Cash’s , Jones, Haggard, any longer. Nashville is a
business , and it is about the money. The record labels target teen
girls and young women, for they are the core audience. Also songs are
downloaded, and that isn’t going to change, because the companies that
have them for download pay the record labels to avoid any legal battles
to stop them. Artist and writers get an extremely small amount for
downloads. I do not know when that will change , for when the powers
that be are making a lot of money they are not interested in making
changes.

Lamitschka:  If you had the chance to change something about the music industry, what would it

Answer:
The powers that be in Nashville and organizations such as Itunes,
Amazon, CD Baby and others would have to pay the songwriters and artist a
fair amount for their songs, and there would be more than just a couple
major labels who decides what gets airplay. That is why I love touring
the UK, for the people there are not brainwashed by Nashville, and
decide what they like.

Lamitschka:  As an artist, you so many tasks such as recording, touring, interviews. What do you

Answer:
I do not have to think of that I am a live performer. I love to create a
connection with the people in the audience and pull out all the stops
to entertain them to the very best of my ability.

Lamitschka:  Are you doing anything to take music beyond its current borders or are you happy

Answer:
I write and have a couple people in Nashville who pitch some of my
commercial songs, and I write songs that tell stories, and  are about
life, and my hope is that enough of us move in that direction to take
commercial music back to that, but only time will tell if it will work.

Answer:
When I was a child and listening to the Grand Ol Opry out of Nashville
on the radio I knew then that I wanted to be a performer.

Answer:  It is and has been for a long time something that seems to be a God given talent. It comes naturally to me.

Answer:
The next song, the next tour to see who i can meet and share my music
with . The next occurance that creates a special moment that I touch
another human being in a positive way. It is in my soul, my being. I
would not know how to stop.

Answer:
I go boating, or just sit by the lake at my RV,, hang out with my fur
buddies,, work at and around my house, Spend time wtih friends and
family. I do not really make a lot of plans when I am home I just enjoy
what comes.

Answer:
I hope I do not sound jaded, but I have learned thru years of being in
recovery from Alcoholism that I am where I am supposed to be, and I need
to live life on lifes terms. I know that in order for me to be at peace
with my fellowman, higher power and life in general I need to accept
things daily as they are. I would however do some things differently if I
had a chance to do them again.