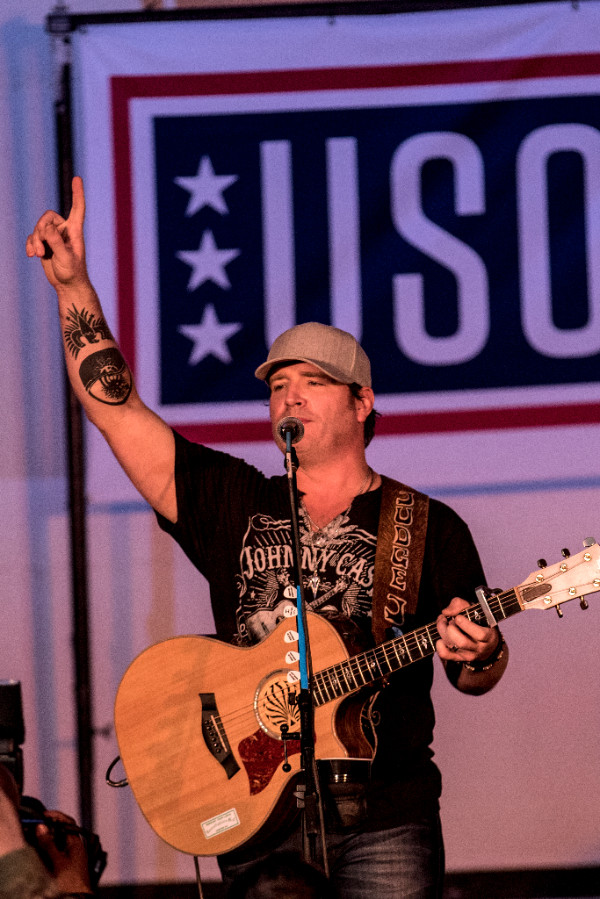 NASHVILLE, Tenn. (Tuesday, May 24, 2016) – On Sunday, May 22 country star Jerrod Niemann
returned to the states from his first-ever USO Tour with the National
Guard. Other celebrities that joined him on the six-day, four-country
tour through Europe and the Middle East include actors Robert Patrick and Matthew Lillard, former NBA player Sam Perkins and Top 10 in the world UFC middleweight, Special Forces Sniper, Ranger qualified and Green Beret assigned to the SOD(A) Tim Kennedy. Led by the Chief of National Guard General Frank J. Grass, the tour visited five bases in Kosovo, Kuwait, Afghanistan and Romania.

“I’m so grateful to have traveled overseas on the USO tour with
four-star General Frank Grass, his amazing wife, his staff and the other
entertainers that wanted to go visit our brave men and women defending
our freedom,” shared Niemann. “Playing music and visiting with our
troops half a world away is the most amazing thing I’ve ever been able
to experience, and hopefully the songs brought them back home for a few
minutes. It takes a very special person to be willing to selflessly
spend so much time away from their families, and lay everything on the
line for their country and fellow Americans. Thank you for all you do
for us!”

About the USO
The USO strengthens America’s military service members by keeping them
connected to family, home and country, throughout their service to the
nation. At hundreds of locations worldwide, we are united in our
commitment to connect our service members and their families through
countless acts of caring, comfort, and support. The USO is a private,
non-profit organization, not a government agency. Our programs, services
and entertainment tours are made possible by the American people,
support of our corporate partners and the dedication of our volunteers
and staff.