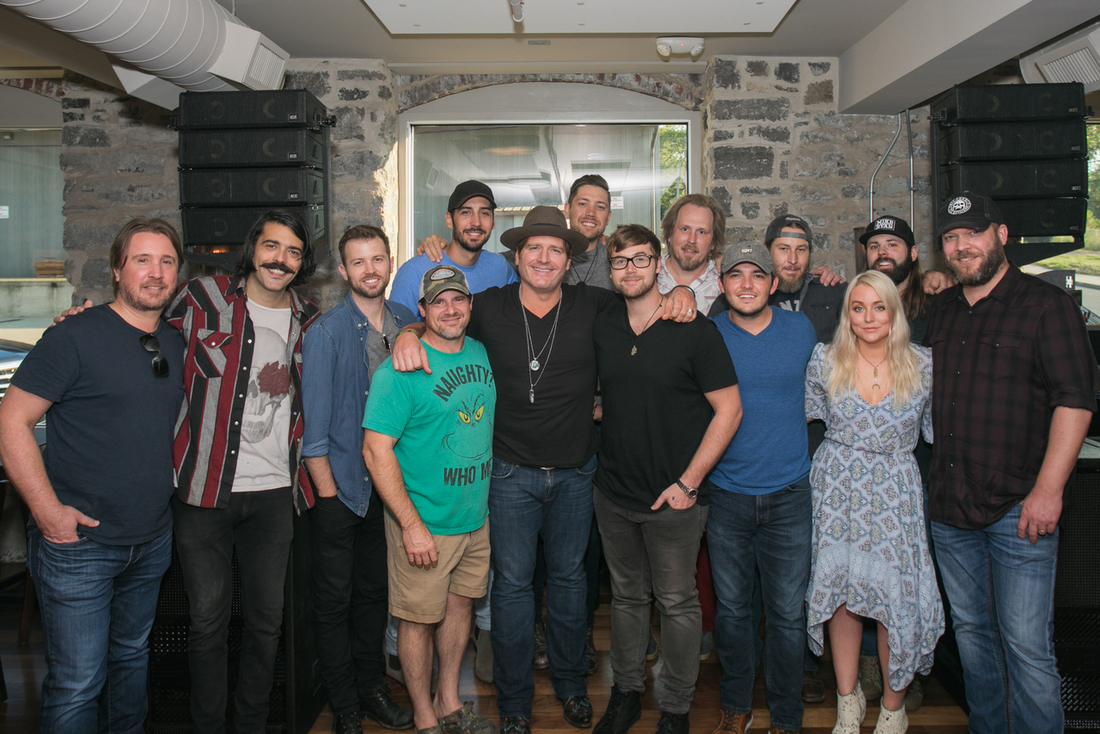 Nashville, Tenn. (September 27, 2017) – Curb Records’ JERROD NIEMANN celebrated his pioneering new album, THIS RIDE
– available everywhere October 6 – surrounded by family, friends and
the acclaimed songwriters that are featured on the album at an intimate
soirée last night (9/26). Gathering at Hemingway’s Bar & Hideaway in
Nashville, TN, the PLATINUM-selling hitmaker introduced the album and
paid special tribute to the incredible tunesmiths in attendance. Adding
to the already poetic vibe of the aptly named restaurant, Niemann’s
favorite lyrics from all 13 album tracks were set on full display around
the room.

“It’s an honor to be a part of this community,” shared
Niemann. “It was important for me at this event to celebrate the talent
and friendship of everyone that poured their heart and soul into this
album.”

In anticipation of THIS RIDE, Niemann recently released music videos for the sexy “But I Do,” grooving feel-good anthem “I Got This,” and the heart-wrenching “Comeback.” The album is currently available for pre-order, and fans that purchase will receive four songs instantly, including single “God Made A Woman.”

Niemann’s long string of success dates back to 2010 with the #1 debut of JUDGE JERROD & THE HUNG JURY,
while each of his next two albums also landed inside the Top 10 on the
Billboard Top Country Albums chart. Meanwhile, songs “Lover, Lover” and
“Drink to That All Night” became PLATINUM-certified smashes, and “What
Do You Want” struck GOLD as a sultry Top 5 Country radio hit.

Known for his charismatic live shows, Niemann has shared the stage with
superstars like Keith Urban, Dierks Bentley, and Brad Paisley throughout
his career, and continues on the road with headline dates from Florida
to California through November.

Fueled by a nearly decade-long career, prolific Nashville hitmaker
Jerrod Niemann is digging deeper with his forthcoming Curb Records album
with the uplifting duet “A Little More Love” (with Lee Brice) and his
romantic follow-up single “God Made A Woman.” Known for clever wordplay
and attention-grabbing lyrics, the highly engaging singer-songwriter
last topped Country charts with his PLATINUM-certified anthem “Drink to
That All Night,” a multi week #1 from the album HIGH NOON – on
which he co-wrote eight of the 12 tracks. Niemann first burst onto the
scene in 2010 with his critically-acclaimed major-label debut, JUDGE JERROD & THE HUNG JURY,
which skyrocketed on the strength of his PLATINUM-certified #1 smash
“Lover, Lover” and GOLD-certified Top 5 “What Do You Want.” His second
release, FREE THE MUSIC, included Top 15 “Shinin’ On Me” and
poignant ballad “Only God Could Love You More.” From Academy of Country
Music, Country Music Association, and CMT Award nominations, to
headlining and touring with some of Country’s hottest acts – Dierks
Bentley, Brad Paisley, and Keith Urban – Niemann continues to make his
mark by creatively pushing boundaries all while offering a sincere nod
to the legends before him.