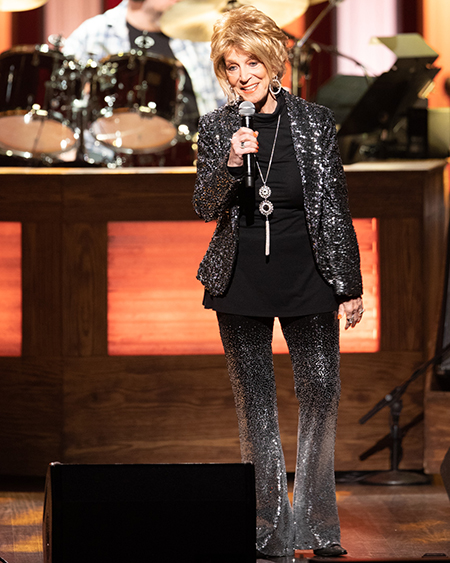 “Miss Country Soul,” Jeannie Seely,
known for her husky voice and 1966, Grammy-winning hit “Don’t Touch
Me,” celebrated 52 years as a member of the Grand Ole Opry family this
past weekend, an achievement attained by only a handful of country
artists. Standing on stage in the sacred circle that upcoming artists
dream of, the same iconic wooden circle onstage that holds special
memories of all of those who have performed on the hallowed circle.

Seely is loving life and excited for the future. She recently has gotten
back into songwriting and is very proud to have the recent #1, “Like I
Could,” on the Bluegrass Charts recorded by Rhonda Vincent. The single
was co-written with Erin Enderlin and Bobby Tomberlin.

Seely has no plans of slowing down, in the Spring of 2020 she’ll be
releasing a brand new album, “An American Classic,”  and continues to
host her weekly “Sundays With Seely” on Willie’s Roadhouse on SiriusXM
and proudly host Opry segments and perform each week as well as tour
nationally.

“The Opry has been in my life as far back as I can remember, about 4
years old, and except for a brief time in Los Angeles, I have either
been there or listened every weekend!  I remember when Jack Greene and I
were touring together, we would pack up as quickly as we could after a
show to get on the bus and turn on the Opry as we travelled home. We
were listening on the night before Stringbean and his wife were murdered
and heard him perform and heard the response of the audience that
night.  These are treasured memories,” states Jeannie Seely. “It has
often been said among Opry artists and musicians, you are either Opry or
you’re not, there doesn’t seem to be a way to explain it, we’d just
rather be there! The Opry is a way of life to me, another home and
that’s where my heart is. You can bet I’ll be listening when the day
comes I can’t be there!”

“Seely is a fixture of the Opry both onstage and backstage,” said Dan
Rogers, Opry VP and Executive Producer. “From her performances in the
Opry’s famed circle to her witticisms in the wings to the way she
nurtures the next generation of Opry stars, she’s one of a kind. Happy
52!”

Country music legend Jeannie Seely has achieved chart
topping songs as a solo artist, as a duet partner, and as a songwriter.
Early in her career, Jeannie’s deeply moving vocals earned her the
nickname of “Miss Country Soul”– a title that’s still used today.
Jeannie’s biggest dream came true when she was inducted as a member of
the world-famous Grand Ole Opry, becoming the first Pennsylvania native
to do so. Jeannie takes much pride in her involvement and support of
musicians’ rights. In 2017, Jeannie celebrated her 50th anniversary as a
member of the Grand Ole Opry.  From her 1966 Top 10 Billboard album The
Seely Style to her recent self–produced album Written In Song,
consisting entirely of songs she’s written, Jeannie’s recordings have
spanned six decades and provided enjoyment to country music fans all
around the world. In his 2003 book “Finding Her Voice: Women In Country
Music,” music critic Robert K. Oermann wrote, “With her chin-out,
tough/tender, heart-of-gold manner, Jeannie Seely remains one of
country’s most completely modern female personalities,” and that
statement still holds true. Keep up with all things Jeannie Seely at www.jeannieseely.com.