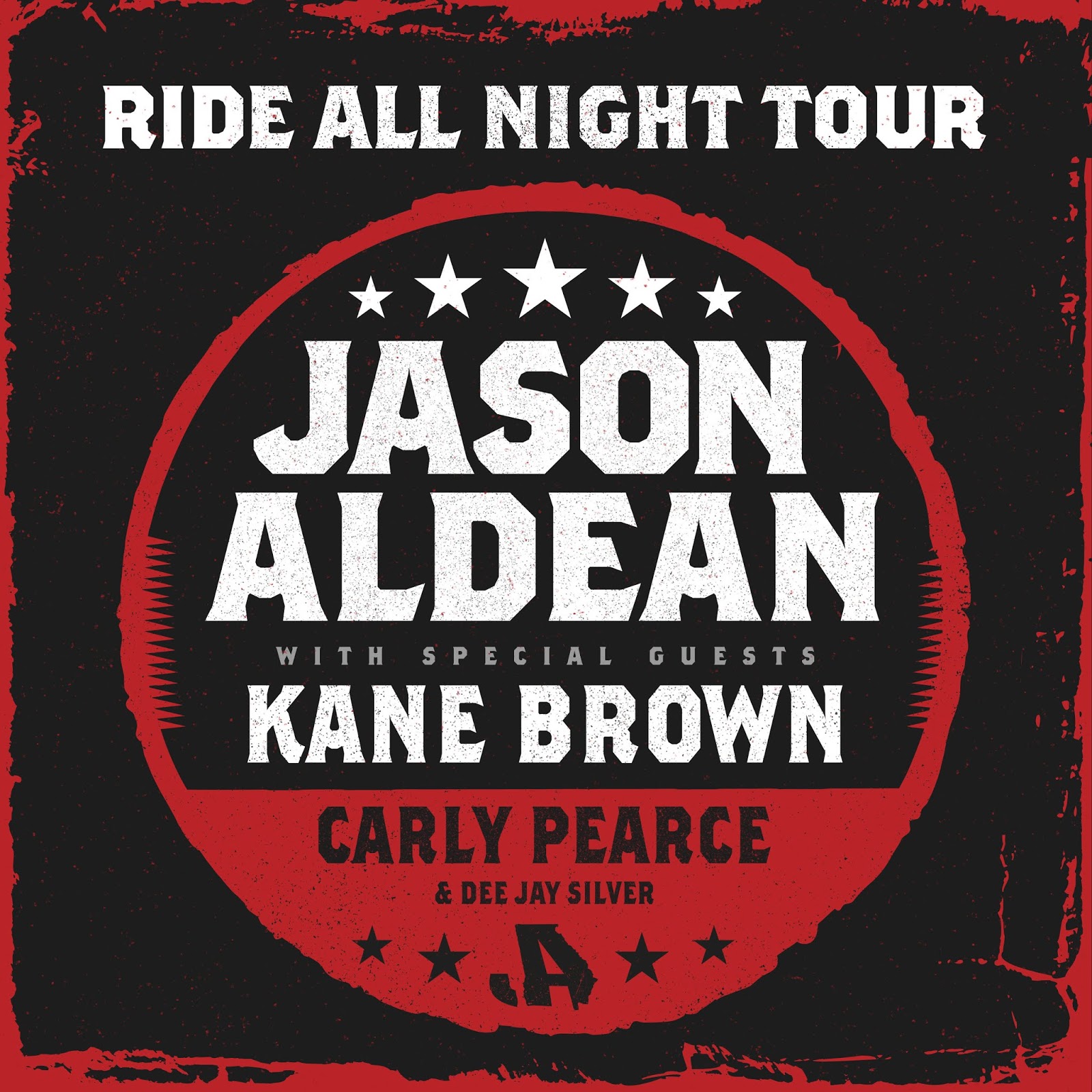 Jason Aldean’s RIDE ALL NIGHT TOUR Revs Up in May

NASHVILLE, TN – Jan. 14, 2019 – Three-time and reigning ACM “Entertainer of the Year” Jason Aldean announced details today for his 2019 RIDE ALL NIGHT TOUR
launching May 3rd with back to back nights in Uncasville, CT, after
kicking off the 2019 touring season headlining Tortuga Music Festival
and Stagecoach. Named after one of the most “intriguing” (Rolling Stone) tracks off his No. One selling album REARVIEW TOWN,
Aldean has tapped Kane Brown as direct support for the full-throttle
run along with Carly Pearce and Dee Jay Silver as they trek to over 30
cities nationwide. Fans can first purchase tickets beginning Fri., Jan.
25 for select cities as part of Live Nation’s Country Megaticket at www.Megaticket.com and additional dates will continue to rollout over the coming weeks. Live Nation is the national tour promoter.

The “musically muscular, big-tent entertainer” (The Atlantic) will
deliver a mix of new hits and fan favorites as he knows to choose “a
pile of hits to keep a sold-out crowd singing along for 95 minutes” (The Oakland Press). Proving to be a “natural born entertainer who consistently delivers his best” (CMT) Aldean “has got this thing down pat” (UPROXX) as “he sells out stadiums and continues to bring his singles to the top of the radio charts” (Forbes).
Aldean is only the second Country act in history to score four
consecutive chart-toppers on the all-genre Billboard 200 albums chart
with his current album REARVIEW TOWN, with six of his previous LPs
having achieved Platinum certification or better. His record-breaking
eighth studio album includes his current Top 5 and climbing hit “Girl
Like You” along with the two back-to-back multi-week chart toppers “You
Make it Easy” and “Drowns The Whiskey.” The path paved by his wide-open
sure-footed approach has defined the genre’s 21st century including more
than 17 million total album sales, 21 No. One singles and countless
recognition from the GRAMMYs, ACMs, CMAs, BBMAs, People’s Choice Awards and more.

Since the release of his Platinum-certified self-titled debut album, RCA
Nashville’s Kane Brown has earned gigantic hits, Platinum and
multi-Platinum RIAA certifications, more than two-billion career
streams, and multiple award wins. His latest album, EXPERIMENT, debuted
at No. One on the Billboard 200 all genre chart, making Brown the only
male country artist in more than 24 years to debut on the Billboard 200
with a sophomore album. He made history with his 12-week No. One debut
album by becoming the first artist in all of Billboard history to top
all five Billboard country charts with his debut record. Brown earned
the most played song on Country radio in 2018 with his multi-week,
award-winning No. One hit “Heaven.” Additionally, Brown won three AMAs making history as the country star with the most award wins in one night for a first time nominee.

Carly Pearce defied the odds with
her GOLD-certified No. 1 hit “Every Little Thing,” which steered a
chart-topping trifecta on SiriusXM’s The Highway, to become the highest
charting solo female debut since July 2015 and one of only three to
accomplish the feat in 13 years. She has since scored coveted slots on
major tours, plus won CMT Music Awards “Breakthrough Video of the Year” and Radio Disney Music Awards “The Freshest! – Radio Disney Country Best New Artist,” inspiring ABC News Radio to
boast: “’Every Little Thing’ points to Carly Pearce as country’s ‘it’
girl.” Pearce is currently the only female nominated for iHeartRadio Music Awards “Best
New Country Artist.” She is aligned once again with sought-after
producer and longtime collaborator busbee (Katy Perry, Keith Urban,
Maren Morris, Kelly Clarkson) recording her forthcoming sophomore album
on Big Machine Records and has released the lead single, “Closer to
You.”

For more information and for a full list of upcoming tour dates, visit www.jasonaldean.com.