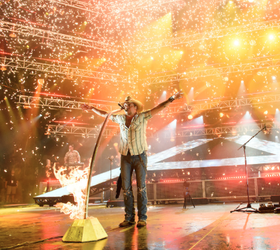 JASON ALDEAN ANNOUNCES THE
2ND LEG OF HIS BURN IT DOWN TOUR
KICKING OFF IN FEB. 2015
Aldean’s “Burnin’ It Down” Tops The Radio Charts
Today To Become His 14th Career No. One

Nashville, TN – Oct. 20, 2014 –Jason Aldean’s previously sold out BURN IT DOWN TOUR
will continue into 2015, and the smash hit that gave the red-hot tour
its name is now No. one on both the Billboard Country Airplay and
Mediabase radio charts. The two-time ACM “Male Vocalist Of The
Year” will kick off the next leg’s 23-city run presented by Live Nation
on Feb. 12 in Greenville, SC with special guests Cole Swindell and Tyler
Farr. Fans can now purchase tickets for the first announced dates at www.jasonaldean.com with more details to be revealed over the next few weeks.

“We
are coming off a big album release week, and we wanted to keep the
momentum rolling and get this next leg of the tour announced,” Aldean
said. “Cole and Tyler are two of the hottest up-and-coming artists out
right now, and I really dig what they do in their live shows. They are
also just great friends, so it’ll be cool to have them out and see what
kind of trouble we can get into together.”
Critics around the country agree this is Aldean’s ”most explosive tour ever” (Rolling Stone) and a “game changing run” (Billboard).
First Announced Cities on the 2015 BURN IT DOWN TOUR:
Greenville, SC
Greensboro, NC
N. Charleston, SC
Bossier City, LA
Tupelo, MS
Nashville, TN
Toledo, OH
Peoria, IL
Cedar Falls, IA
Wichita, KS
Tulsa, OK
Little Rock, AR
Bozeman, MT
Spokane, WA
Eugene, OR
Grand Rapids, MI
Louisville, KY
Ft. Wayne, IN
Corpus Christi, TX
Beaumont, TX
Charleston, WV
Hartford, CT
Hershey, PA

The certified PLATINUM single “Burnin’ It Down” became
the fastest selling country single of 2014, holding the No. one
position on the Billboard Hot Country Singles chart for nine weeks. The
track serves as the lead single off Aldean’s recently released sixth studio album OLD BOOTS, NEW DIRT, which
debuted at No. one on Billboard’s all-genre Top 200 chart, breaking the
record for both first-day and first-week streams ever by a country
album on Spotify.


To
date, Aldean has sold over nine million albums and has taken 14 trips
to No. one. Each of his albums has been certified PLATINUM and he has
been officially recognized as the top digital male country artist in
history with over 21.5 million in digital sales. Aldean’s upcoming tour
follows a monumental first leg, which saw him play five stadium dates in
addition to sold-out shows in the country’s biggest amphitheaters and
arenas.
Breakout country artist and CMA Awards’ “New Artist of the Year” nominee Cole Swindell released
his self-titled debut album earlier this year, claiming the title of
highest selling country debut since 2011 and featuring Swindell’s latest
single, “Ain’t Worth The Whiskey,” along with his first two consecutive
No. one singles, the gold certified hit “Hope You Get Lonely Tonight,”
and the platinum certified smash “Chillin’ It.”

Columbia Nashville artist Tyler Farr’s breakthrough debut album REDNECK CRAZY marked the biggest country debut of the year by a new male artist. Hailed as the “song of the summer” by The New York Times,
the No. one, platinum-selling title-track “Redneck Crazy” and the
Gold-certified hit, “Whiskey in My Water,” earned the Missouri native
back-to-back No. ones.