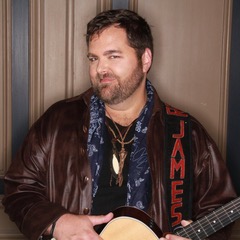 When you meet most singer-songwriters, you discover they
have a ‘day job,’ at least at the start of their music careers. Maybe they are
restaurant servers or they are delivering pizzas. James Robert Webb has a day
job and he has no intention of giving that up. He is a doctor with a medical
practice in his home state of Oklahoma, as well as a blossoming recording
career and a new album being produced in Nashville. As he told me during our
interview (below), “I can’t abandon my patients.”  His hashtags say it clearly: #DoctorByDay
#SingerAtSundown

The upcoming album and the first single from the album,
‘Now We’re Gettin’ Somewhere,’ are under the direction of Grammy-winning
producer Buddy Cannon. The single is now available everywhere on digital
platforms. I recently met up with James Robert Webb to talk about his life and
music.

Preshias Harris: OK, tell us the secret of how you balance
a successful medical practice and a successful music career.

James Robert Webb: Sometimes I wonder how well I balance
it. The other thing is, I’m a father, too. I’ve got my wife and three kids. The
hardest thing for me is to make sure I’m spending enough time with the family,
with all the travel and everything. But I don’t do a lot outside of music.  My hobbies are all replaced by songwriting.

JRW: Exactly! Classically, as a doctor I’m not out playing
golf. I’m not going out to Africa and shooting trophy lions or anything like
that! [laughs] Most of my free time involves playing somewhere. But for me, it
really comes down to having to keep the priorities straight. It might sound
egotistical and greedy, but my number one priority is my health and me. Because
if I crumble then everything else crumbles after that.  Then it has to be my family, and third is my
medical practice, because I always have to have that, and I can’t abandon my
patients. And after that it’s music.
That sounds like a lot of things to do, but you just get up every day
and you’ve got to do those things in order.

PH: What is one of the hardest things that you have to face
in your dual careers?

JRW:  It’s being away
from my family, away from my kids. We would have moved here to Nashville, but
we have a lot of family roots, both sides of the family, back home in Tulsa and
Texas. So there’s a lot of support structure there, there’s a lot of
people.  Plus, my kids are in the age
range of fourteen down to eight, so I don’t want to uproot them.  But the good this is we have FaceTime, things
like that we didn’t have ten or twenty years ago, to see people face to face.

PH: Your single, ‘Now We’re Getting’ Somewhere,’ was
released last month. Can you give me some “media tidbits” for what we can
expect for your album?

JRW: A media tidbit… well, I’ve got a song I’m cutting by
Bob McDill that has never been recorded. I love Bob McDill, he’s in the Hall of
Fame. He’s been retired for a number of years.

PH:  He’s one of
those honest songwriters.

JRW: Absolutely.
There’s that plaintive honesty in his writing that really shines
through. There are a few guys from that era that are like that.  Don Shlitz is another one.

PH: And of course, Hall of Fame, Grammy-winning producer Buddy
Cannon is who is producing your album. Buddy is a long-time producer and the
man behind the success of Kenny Chesney. What were some of the highlights of
working with Buddy?

JRW: I think the best thing to me about Buddy is when you
start out writing or start out as an artist, you always want to work with
people at the highest level. That’s your goal. My goal is not to go out and be
a star and play on stage for fame and glory or whatever. My goal is to create
the best music. Music that can stand the test of time. To do the best I can
with the gift I’ve been given. So being able to work with someone of Buddy’s
calibre just blew me away.  If you told
me last winter that was going to be working with Buddy Cannon, I wouldn’t have
believed you. Suddenly, there’s a friend of a friend who passes it along. Buddy
heard my last single and heard some potential, and the next thing I know, I’m
going to meet him. As soon as we had met and he agreed to produce an album on
me, I kinda had this feeling that he’s got this song that he’s had in his
drawer for ten years. You always hear these stories. And he did.

PH: Your song, ‘American Beauty’ is about a serviceman
separated from his family. What moved you to write that song?

JRW: In my family,
I’ve always grown up with that military service tradition. I myself was never
in the service. At times I kinda look back and think that’s one of the things I
missed out on that most everybody in my family did.  My dad was actually in the last draft class
for Vietnam. I was born when my dad was stationed overseas, in Germany. My
mom’s father was in World War Two, the Battle of the Bulge, was awarded a
Purple Heart and was always active in D.A.V. and V.F.W. My mom’s grandfather
was in World War One. It just goes on and on. And the other thing with my
family in Oklahoma is the Highway Patrol. I have four or five family members
who were in the Highway Patrol.  My dad’s
grandfather, back in the day, was a sheriff in Oklahoma when it was Indian
Territory.  There’s always been that
theme of being the protector. It came from that tradition.

PH: You launched a program called ‘Unsung Heroes.’ What can
you tell us about that?

JRW: Unsung Heroes goes back to that whole military
tradition and trying to do something for veterans. There are a lot of problems
with how vets are treated by the V.A. and sometimes by the way the public
treats them. I did some time at a V.A. hospital when I was in residency and
internship so I am familiar with a lot of guys from there.  Unsung Heroes is just about giving back.
We’re working with a great charity called Soldier’s Wish, so on Armistice Day,
Veteran’s Day, we’re donating the proceeds from American Beauty to Soldier’s
Wish. So we’re really looking forward to that. We’ll be in a parade in Tulsa
and ride on a tank, something like that. The cool thing about that is my
grandfather who was in World War Two was born on the original Armistice Day,
11/11/1918, so this would have been his hundredth birthday. So that’s going to
be a special day.

PH: Your music is described as ‘new traditional.’ Who are
some of the artists that have influenced your music?

JRW: Well, George Jones, of course. My favourite George
Jones songs are the early ones like ‘White Lighting,’ the uptempo stuff, The
Corvette song, stuff  like that. I grew
up kinda listening to everything. Some of my earliest memories of being around
my dad was him playing Marshall Tucker Band, ‘Fire on the Mountain,’ ‘Ghost
Riders in the Sky,’ Johnny Cash. I think they were on the radio at the time.
KVOO, the big station in Tulsa, where Bob Wills was actually out of.  I can remember when I was in high school,
KVOO was still traditionalist and they would play Marty Robbins’ ‘El Paso,’ it
seemed like every day.  So I grew up
listening to a lot of that. And when I really got interested in Country again
was around 2003, 2004, listening to Toby Keith, Garth Brooks, Brooks and Dunn
where it was a different sound.  I
thought that was a kind of golden age in the nineties where they took the
traditional country influences and melded them with other influences like
rockabilly and rock n’ roll and made the genre fresh again. It was just this
new energy. When I got into writing and then discovered my artist voice through
writing; people who were artist-writers who wrote their own stuff, really good
stuff, more than just one hit song were an influence. Garth was probably the
first ‘song man’ I knew, even before I first came to Nashville, I could tell
that Garth or his team were picking really good songs. They weren’t all songs
that he wrote, and the songs he wrote were great. And that’s something that’s
dovetailed into working with Buddy, because Buddy is that way too. About half
the songs we cut are ‘outside’ songs and the problem is always finding the best
songs at my level. ‘Now We’re Getting Somewhere’ was, I think, from twenty-five
years ago, I believe Buddy said.  Shawn
Camp, Taylor Dunn and Wynn Varble wrote this back in the nineties.  I just love nineties Country! I find
influences from different places but I’m just looking for ways to make a new
sound. You go in the studio, write every day and see what comes out.

You can find tour dates and read more about the upcoming
album at www.jamesrobertwebb.com  For more about Soldier’s Wish, visit www.soldierswish.org