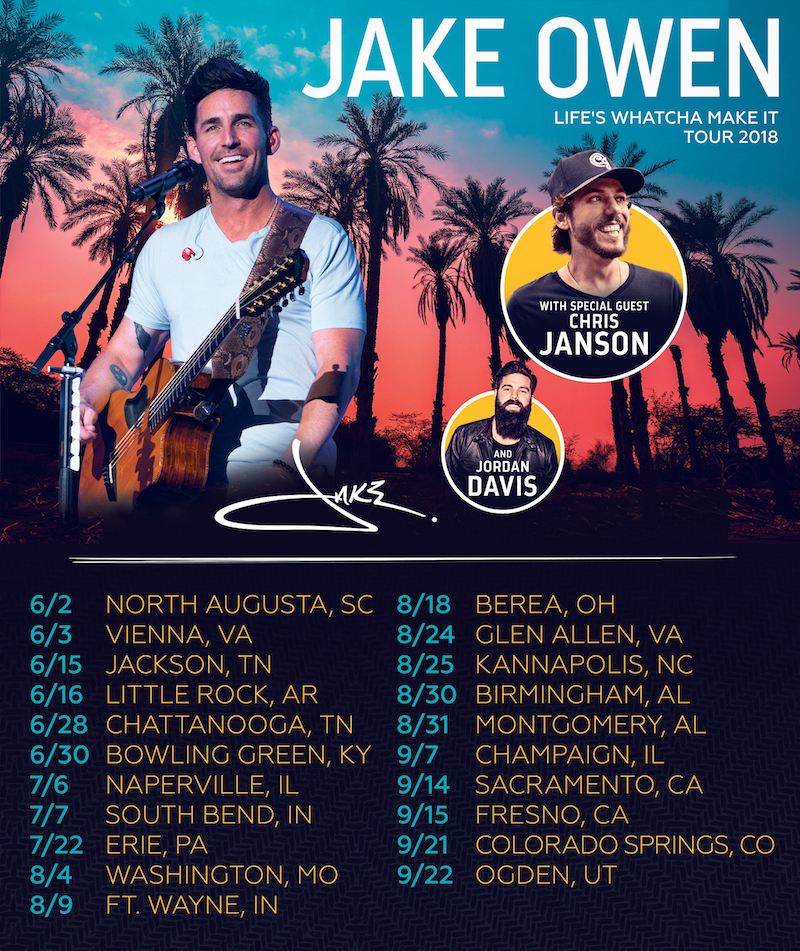 “I’m excited to do what I moved to town to do,” shares Jake. “Get on a
stage and play songs that make people happy. Putting a tour together is a
team effort and I’m fired up to share this summer with everyone who’s
helped me put this thing together; my fans, my band and crew, Chris
Janson, and Jordan Davis.”

In addition, “I Was Jack (You Were Diane),” the fastest rising single of
Jake’s career, entered the Top 10 this week on the Mediabase chart. The
song has been burning up the charts since its release back in March
when over 130 monitored chart-reporting country radio stations added the
song on or before official impact date, marking an unprecedented start
to a new single in Jake’s career to date.

Watch the new music video for “I Was Jack (You Were Diane)” HERE. You can also watch a behind the scenes clip HERE.

Last week, Jake had the honor of competing in The Web.com Tour’s
Nashville Golf Open, benefitting the Snedeker Foundation. Check out his
comments after his first round HERE, final round thoughts HERE, plus, video footage of the players singing a few lines of “I Was Jack (You Were Diane)” HERE.

During his opening round of play, a Twitter exchange occurred about
Jake’s score, which produced numerous donation pledges, one being a
pledge of $5K from Brandt Snedeker, and another pledge of $5K from
country music star Chris Young for each birdie Owen scored. While Owen
didn’t score any birdies, the NGO has announced that it will make a
$10,000 donation to the Jake Owen Foundation for bringing tremendous
awareness to the tournament.

After Owen’s final round on Saturday morning, he said, “I’m so thankful
to even have the opportunity to be out here playing with these guys. At
the end of the day, I tried as hard as I could to raise money for Brandt
and his foundation. Even though I went “birdieless,” we did bring a lot
of people out. They seemed to enjoy it, and I enjoyed it. I’ve been
able to do some really cool things in my life and this is definitely on
the list of one of the greatest events I’ve been a part of. As a
competitor, it’s a bummer, but for me, the score doesn’t matter right
now. I’m so thankful to every player out here and every person with the
PGA, web.com tour and NGO for giving me a spot.”

Owen has had six No. 1 singles to date – the 2X PLATINUM anthem
“Barefoot Blue Jean Night,” PLATINUM-certified hits “Beachin’,”
“Anywhere with You,” “Alone with You,” “The One That Got Away,” and,
GOLD-certified “American Country Love Song.” Owen’s fifth studio album, AMERICAN LOVE, debuted at No. 1 on Billboard’s Top Country Albums chart and No. 4 on the Billboard 200
all-genre chart. Most recently, Owen signed a new label deal with Big
Loud Records, reuniting him with award-winning producer Joey Moi. Owen’s
debut single for Big Loud, “I Was Jack (You Were Diane),” was the
most-added single at country radio for two consecutive weeks, hit the
Top-15 in five weeks and is the fastest rising single of his career.
Owen and Moi are currently in the studio working on the forthcoming
project.