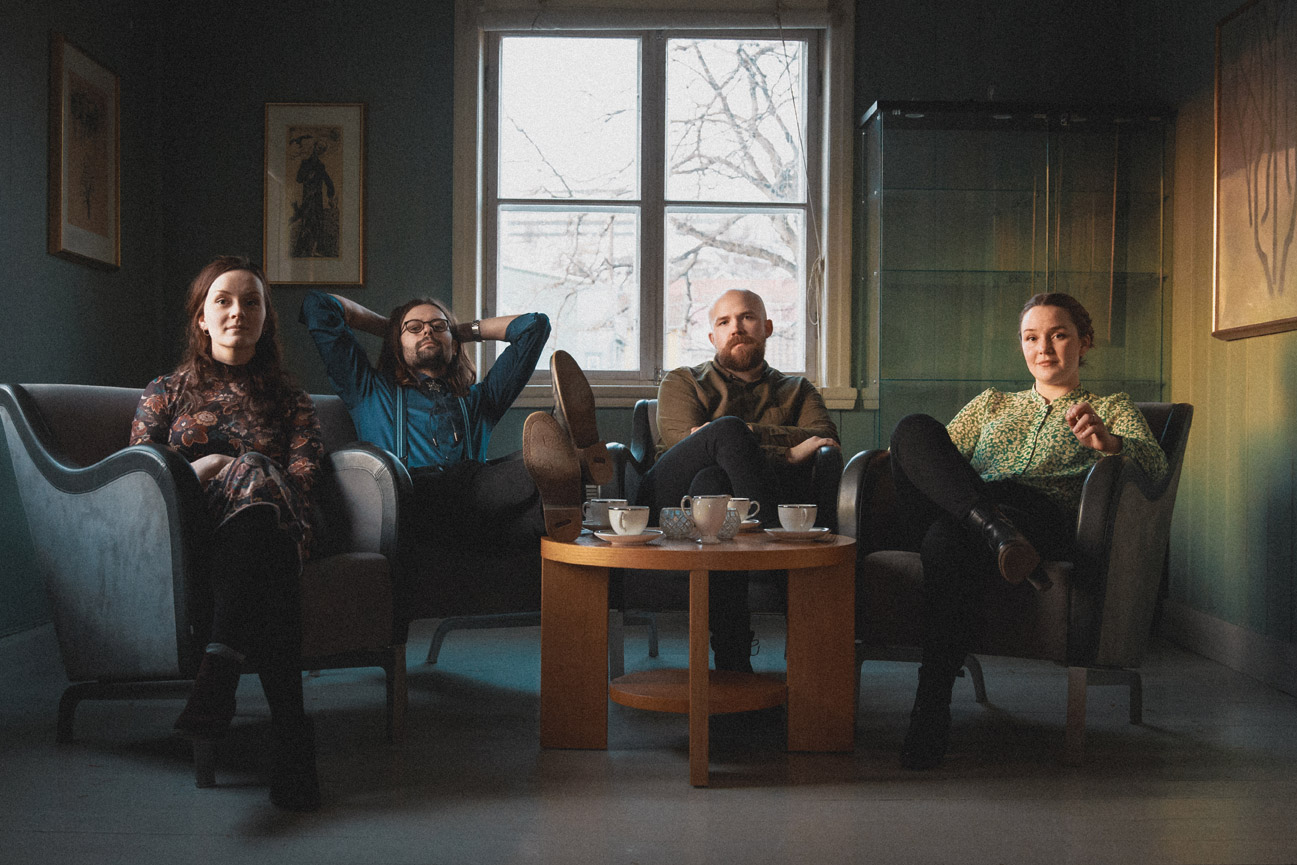 Answer: ‘Travelling Songs’ felt
like a natural choice. We wrote seven songs about travelling in one way or
another.

Answer:The opening track,
‘With You’, is a happy song about taking the risk on an old flame – you might
get hurt, but the feeling of being in love becomes too tempting. Further on,
the album’s title track, ‘Travelling’, tells the story about a young woman
dreaming of being somewhere else, unfortunately she´s stuck in a 9 to 5 café
job.We have a romantic
relationship to trains, since there are none in the most northern parts of
Norway. ‘Trainriding’ was written while longing to break free from the chains
of life – and since there are no trains around, there’s something romantic
about running away by train. And most times leaving someone is quite difficult
– ‘Leaving Day’ is about the times leaving actually is for the best.‘Sorrow’s Daughter’, is
based on a true story from Ida & Ida’s homelands. In the 18th century the
last beheading in the northern parts of Norway took place, and «Sorrow’s
Daughter» reflects a mother’s great sorrow for her lost children.‘Sing, Sing, Sing’ is a
fresh breath on the album with stomping groove and an angry, hefty barytone
guitar.In the summer of 2018
we were asked to write a brand new lullaby, it all resulted in the ‘Last Call’
– a song about pavements of gold in Tromsø in the middle of the summer night.
(The sun never sleeps  in Northern Norway
during the summer time).

Answer: On our first album,
‘Annabelle’, we started writing the story of Annabelle & Peter. We got
really inspired by the idea of writing about someone else’s life. This album is
produced quite minimalistic – most of the songs are recorded live and we didn’t
add a lot of extra sweets since we wanted to keep it pure.

Our
second album ‘Travelling Songs’ is conceptually about travels, and each of the
seven tracks tells a story about the transition from one place to another in
some way. It’s a lot more produced compared to the previous album. We’ve added
more layers of guitars, percussion and vocals. We even hired a string quartet
plus some other guest on various instruments to help us out a little.

Common
for both the albums is the storytelling and all the singing. That’s an
important part of our music.

Answer: It depends on who
you’re asking. We all have our favorites when it comes to both recording
instruments and vocals. Actually, we’re in the studio right now finishing our
3rd album. Lately we’ve been working on producing our songs, when this album is
done we’ve been using like 20 days in the studio working on the songs. It’s
very liberating to record and listen, record, listen and get the chance to dive
deep into the process of producing the songs to their fullest potential.

Answer:We are really into our
new stuff at the moment. The studio process makes us really focus on creating
and that puts all our new songs at the front and centre of our attention. It
really feels like we’re making our best material right now. We’re continuing
our journey into the world of Annabelle and Peter. It’s an inspiring story to
write, because we can mix stories from our own lives and the imagined lives of
two characters that we love writing.

Lamitschka:
As an artist, you do many tasks such as recording, touring, interviews. What do
you like best, what’s your favorite activity?

Answer: Touring – absolutely
touring. We feel very lucky to get to see so many beautiful places around the
world, meeting a lot of nice people and playing on cool venues. Live music is
definitely our favorite part.

Answer: Every release we do is
a highlight – that feeling when you finally get to hold your vinyl baby, that
you made all by yourself from scratch, in your hands is absolutely amazing.
Also the release concert we did for ‘Annabelle’ in April 2018 still stands as
one of the biggest productions we’ve done ourselves.

Answer: We have a really
diverse taste when it comes to music. We’d all been working as musicians for a
long time before we formed Hollow Hearts and we’ve been doing genres from
jazz/soul/funk to heavy metal. We all got our individual influences that we
bring into our music – in this way we kind of inspire each other when making
music together. Of course we’ve all been listening to big heroes and heroines
like The Beatles, The Band, Joni Mitchell, Bob Dylan etc..

Answer: A lot of energy! The
magic happens when we manage to have a common feeling with the audience –
communication is everything.