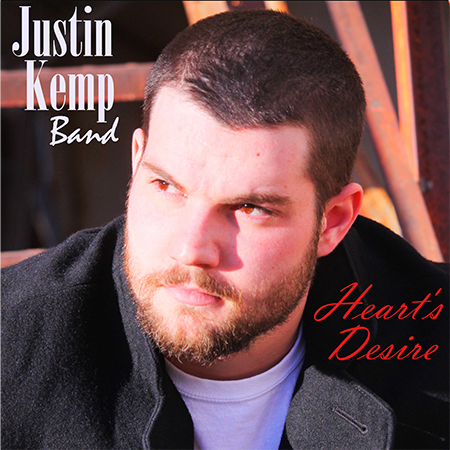 On-the-rise country artist and songwriter Justin Kemp
has announced the pre-order for his upcoming single co-written with his
father and titled “Hearts Desire.” The single follows his last single,
“Better Man,” which stayed on Hot Tracks for 11 weeks on Apple Music and
his well received single “”Steppin’ Stone” released in June 2018.
Pre-order the single here and listen here.

“I am very excited to release “Hearts Desire,” I feel it may be our best
one so far. It means the world to have an entire team working with us
on this project. It was definitely an awesome experience recording in
Beaird studios on this song, Larry and his team are top notch,” said
Justin Kemp. “Big thanks to our amazing manager Jill Pavel and our new
publicist Bev Moser, they have put in a lot of work to make sure this
release is bigger and better than anything we have done in the past.”

The emotional tune spells out the adrenalin rush of new love and
feelings of the heart when meeting that special individual and the song
brings those feelings out making you want to be with your special
someone.

Justin Kemp was born and raised in Hobbs, New Mexico on
the Texas Border. Growing up in a musical family he was heavily
influenced by the great Merle Haggard, George Jones, Keith Whitley, and
all of the legends going back to the 1970’s. Once he picked up the
guitar at the age of eleven there was no turning back. He began
songwriting in High School and pursued music at South Plains College in
Levelland, TX. With the support of his father, David Kemp, who also
plays bass with the band, the Justin Kemp Band was born. Justin
co-writes many of the original songs the band records and performs with
his father, including Steppin’ Stone, which released in advance of their
performance in Nashville during CMA Fest 2018.

Justin and the band tour nationally and he also performs as a trio with
David and their fiddle player Megan Poppe. They have opened for many
major acts including Travis Tritt, Tanya Tucker, Josh Abbott Band, Kevin
Fowler, and Wade Bowen to name a few. Justin was also invited to play
at Craig Campbell’s legendary Corn Hole Tournament this past June at CMA
Fest 2018. With a 2019 Tour on the horizon the band is busy completing
their second EP, and traveling back and forth to Nashville to get the
job done.