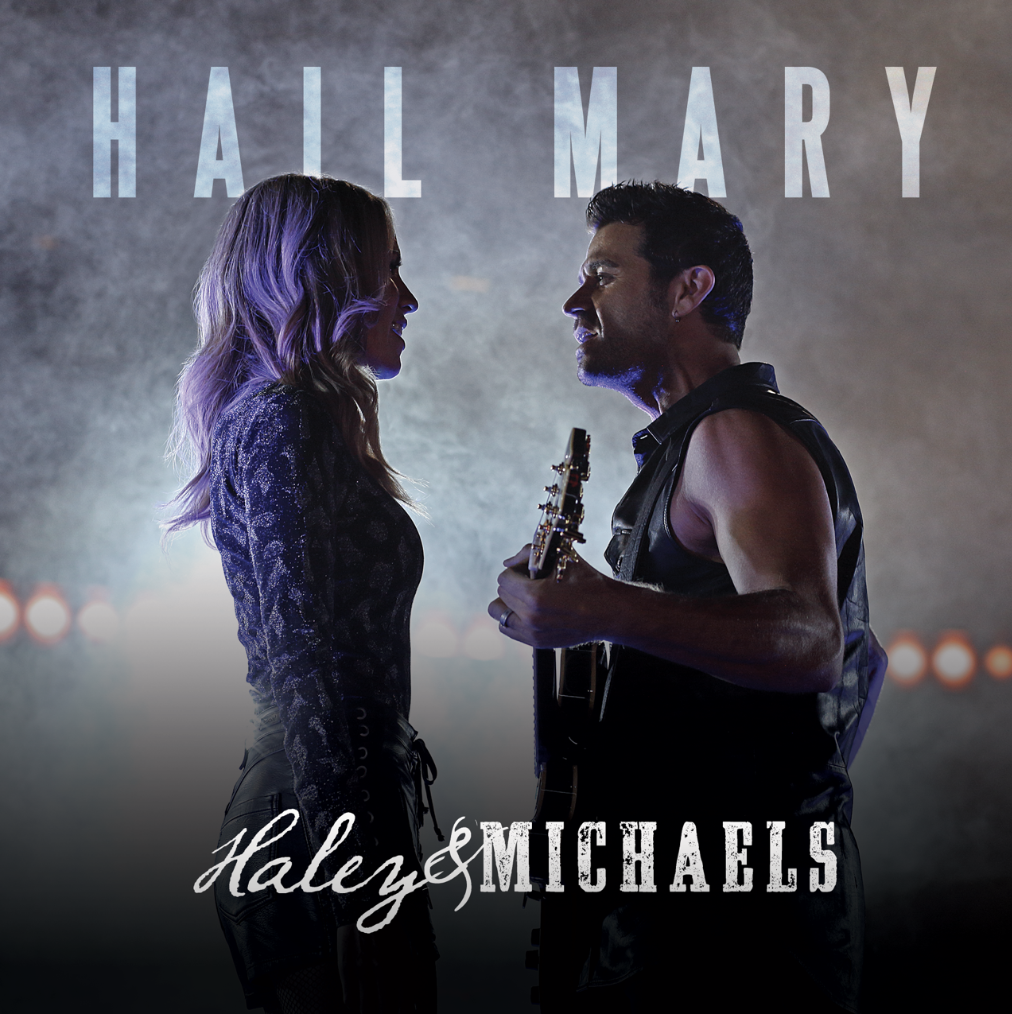 Country music’s hottest new husband-wife duo, Haley & Michaels (Shannon
Haley and Ryan Michaels), grew up just 3 miles apart from each other in
California’s ‘Niners’ territory as burgeoning singer/songwriters, yet
they did not meet until both had relocated to Nashville in 2014. So,
it’s only fitting the duo return to their roots in more ways than one
with their debut album Hail Mary.

The duo co-wrote all 12-tracks on their upcoming album, set for release
on Oct. 4 on Sony/ATV’s label imprint Hickory Records/RED Music.

“Every moment we haven’t been on the road, we’ve spent recording, mixing
and mastering these songs until they felt the way we envisioned the day
we wrote them,” shares Haley & Michaels’ Shannon Haley. “So, to
watch these songs take on a whole new context in a movie such as
Netflix’s Walk. Ride. Rodeo. and beyond with the NFL tapping
the single for Monday Night Football, is really wilder than any dreams
we could have had as a duo or as singer/songwriters.”

Earlier this year the duo learned the album’s title track and lead
single, “Hail Mary,” had been chosen by the San Francisco 49ers for
their 2019-2020 season. Furthermore, the duo filmed its music video for
the song, directed by the team’s VP/executive producer Rob Alberino and
produced by the 49ers, in the stadium of their hometown team.
Haley adds, “It’s where we each learned the meaning of teamwork and it’s
not just an energizing source for us as football fans…performing here
as artists and working with the team is actually living out our dreams!”

“We’re releasing a body of work we’ve spent our whole career creating,”
adds Michaels. “This album has everything from the first song we ever
wrote together to brand new music nobody has ever heard.” He continues,
“Since we wrote our wedding song ‘Giving It All (To You),’ we’ve
performed everywhere from ‘The Today Show’ and The Grand Ole Opry to
Waffle House and now Levi’s Stadium. We’ve really gotten to live so much
of this unique and incredible life together. And since we wrote ‘Hail
Mary,’ we’ve spent the past year traveling and performing our music.
We’re so excited that we are finally ready to release our first
full-length album and celebrate those moments with the fans and share the music with them.”

The duo’s recent organic success with “Hail Mary” sparked interest from
more than just Sony/ATV and country radio. “Working on high-level
productions like the shoot that occurred at Levi’s Stadium is something
our production team looks forward to,” explains the 49er’s Alberino.
“Anytime you can turn a world-class venue into a stage while a band like
Haley & Michaels puts on a show, the final piece is amazing and
that’s exactly what happened.”

To date, 45 radio stations have played “Hail Mary,” and the song has
been featured on some of Spotify’s most premier playlists, landing the
duo opening performances for Jason Aldean at Country Stampede as well as
ACM Awards’ Party for a Cause.

Track listing for Hail Mary with songwriters is as follows:

3. IF WE DON’T GET TOMORROW

Haley & Michaels grew up in Northern California just three miles
apart but didn’t meet until they were both living in Nashville. They had
immediate chemistry and have been writing and recording together ever
since; they were married in May 2015. The duo has been featured on
numerous Spotify playlists, amassing over 30 million online streams, has
appeared twice on NBC’s Today and has also experienced great
success on SiriusXM’s ”The Highway.” They have sold more than 200,000
digital downloads independently. Haley & Michaels signed with
Sony/ATV as songwriters, and additionally with Sony/ATV’s label imprint
Hickory Records/RED are set to release their first studio album on
October 4. For more information on Haley & Michaels, visit www.haleyandmichaels.com or follow them @haleynmichaels on Twitter,  Facebook.com/HaleyandMichaels and @haleyandmichaels on Instagram.