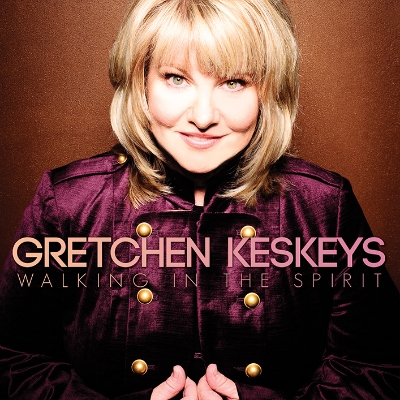 (NASHVILLE, Tennessee) —
Singer-songwriter Gretchen Keskeys has released her debut album,
Walking in the Spirit, via Nashville-based Creative Soul Records.
Gretchen wrote each of the ten songs on the album, and each of them tell
a piece of her story  a story that she hopes will encourage and
inspire Christian music fans around the world.

As a teenager, Gretchen had been plagued with fear, paralyzing anxiety,
insecurity, superstition and depression. Her life was becoming
unbearable. She tried therapy, but that just left her more depressed and
anxious. She heard so many well-meaning people say: find yourself,
take care of yourself, put yourself first. But it was an endless
hole that was never filled.

To make matters worse, Gretchens father was a well-known psychiatrist,
author of a bestselling self-help book and he was labeled by LIFE
Magazine as the father of pop psychology.

Realizing that her daughter was spiraling down fast, Gretchens mother
read her Matthew 11:28-30: Come to me, all you who are weary and heavy
burdened and I will give you rest. Take my yoke upon you and learn from
me, for I am gentle and humble in heart, and you will find rest for your
souls. For my yoke is easy and my burden is light. It spoke deep to
Gretchens heart, and for the first time, she had hope. As she began to
study the Bible and look to Christ, her fear began to subside. And that
is where her spiritual journey began.

Gretchen moved to Los Angeles where she got a job as a page at NBC. The
job opened opportunities, and she landed a role on a primetime NBC
special and then some walk on parts on three popular soap operas. She
began to study at the Beverly Hills Playhouse and she received her
Screen Actors Guild card. But Gretchen had a difficult time navigating
her new life and new relationship with God. Before long, the peace she
cherished started to disappear.

She moved back to Sacramento and eventually rededicated her life to
Christ at a Billy Graham event. Not long after, Gretchen met her husband
Randy, with whom she has three children. She finally found lasting
peace and fulfillment.

Says Gretchen, When I decided to put God first, just as He promises in
Matthew 6:33, all my deepest dreams and desires that were in His will
were coming alive in my life.

Gretchen loved singing since she was a teenager, but she had a fear of
singing in public. My voice just kind of shut down, says Gretchen.
Thats what fear does. Shuts us down. Until 2008.

Frustrated by her fear, Gretchen prayed to God: You have given me this
voice, I want to use it for your glory, but you will have to help me.
And He did. Doors opened for Gretchen to be a worship leader at several
Northern California area churches, and before long, she was traveling
across the country sharing her music and story.

Christ has healed me, given me confidence and security I never had,
says Gretchen. Thinking back to how this journey began, and hearing the
completed album of songs, I know for a fact this would never have
happened without the Lord’s inspiration, guidance, help and blessing. In
many ways for me it is a miracle.

Walking in the Spirit Track Listing:
1. Then I Met Jesus
2. Walking in the Spirit
3. It’s In Your Hands
4. Standing on the Word of God
5. The Battle
6. God Loves You
7. Prince of Peace
8. The Days for Faith
9. God’s Love Will Never Change
10. At Night in the Garden