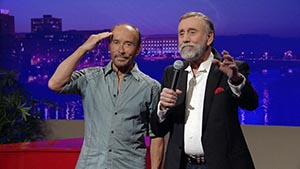 Greenwood
Returns Home To Music City After Serving as Featured Speaker and
Performer at Medal of Honor Bowl Gala in Charleston, S.C.


NASHVILLE, Tenn. (January 15, 2016) –
Lee Greenwood is considered an ICON in country music, with more than 30
albums to his credit. In fact, MCA Nashville released an album in 2013
called ICON, featuring his greatest hits including the
red-white-and-blue anthem, “God Bless The U.S.A.” Kicking off the New
Year with a musical salute to the United States military, Greenwood will
appear on the national TV series “Ray Stevens’ Nashville” airing on
RFD-TV and give a patriotic performance with Darryl Worley and host Ray
Stevens.

Tune in to “Ray Stevens’ Nashville” on RFD-TV on Saturday,
January 23 at 8:30pm ET. Not sure what channel it is? Check your local
listings here.

On January 8, Greenwood was the featured speaker and performer at the
annual True Blue Gala presented by the Medal Of Honor Society in
Charleston, South Carolina which benefited The National Medal of Honor
Museum Foundation and honored our nation’s greatest military heroes, the
recipients of the Congressional Medal of Honor. Greenwood stood in the
presence of 11 Medal of Honor awardees and performed “God Bless The
U.S.A.,” after sharing his testimony of pride and gratitude in what it
means to be an American Patriot. Immediately following the event, he
took to his Twitter and Facebook
pages to share photos from his experience spending time with our
nation’s finest saying, “This was a night among heroes that I will never
forget!”

Greenwood has been endowed an award by the Congressional Medal of
Honor Society himself, with the Society’s National Patriots Award,
recognizing his time and commitment to honoring our nation’s veterans.
Lee has entertained troops on more than 30 USO Tours and participated in
countless patriotic events.

With seven No. 1 songs and 25 charted singles his hits include: “It
Turns Me Inside Out”, “Ring On Her Finger Time on Her Hands”, ”She’s
Lyin”, “I Don’t Mind the Thorns if You’re the Rose”, “Dixie Road”,
“Somebody’s Gonna Love You”, “Going Going Gone”, “You Got A Good Love
Comin”, “Fools Gold”, and “Mornin’ Ride,” Greenwood also celebrates
several crossover hits including, “Touch & Go Crazy”, “IOU” and the
duet with Barbara Mandrell, “To Me”.

Lee Greenwood has also won numerous industry awards including: Male
Vocalist of The Year from the Academy of Country Music Awards in 1983,
two Male Vocalist of the Year Awards from the Country Music Association
in 1983 and 1984, and a GRAMMY® Award for Top Male Vocal
Performance in 1985 for “I.O.U.” He also won CMA Song of the Year in
1985 for “God Bless the USA,” which has been voted the most recognizable
patriotic song in America.

About “Ray Stevens’ Nashville”
“Ray Stevens’ Nashville” is a 12-episode (aired weekly), 30-minute
music, entertainment, TV show centered on music and comedy airing on
RFD-TV, hosted by Grammy winner Ray Stevens. Ray has over 50 years of
hits and comedy to his name. The show features a musical performance by a
guest artist on each episode. Ray ensures viewers will get to see a fun
side of Nashville during the show. For more information, please click here.

About Lee Greenwood
Throughout his expansive career, international country music star Lee
Greenwood has earned multiple CMA and ACM Awards, a GRAMMY for Top Male
Vocal Performance on “I.O.U,” in 1985, and a multitude of other
prestigious award nominations. His discography includes twenty-two
studio albums, seven compilation albums, seven No. 1 hits, and
thirty-eight singles including songs like “Ring On Her Finger,” “Time On
Her Hands,” “Dixie Road,” and “Somebody’s Gonna Love You,” among
others. His stand-out hit “God Bless The USA,” has been in the top five
on the country singles charts three times (1991, 2001 and 2003), giving
it the distinction of being the only song in any genre of music to
achieve that feat. It was also No. 1 on the pop charts after 9/11. Known
for his stand-out patriotism and support of the U.S. military,
Greenwood has been honored with the Congressional Medal of Honor
Society’s National Patriot’s Award, and entertained troops on more than
30 USO Tours. His latest book release is a children’s book called Proud To Be An American, which is currently available in stores, on Amazon and LeeGreenwood.com. For more information on Lee Greenwood, please visit www.leegreenwood.com.