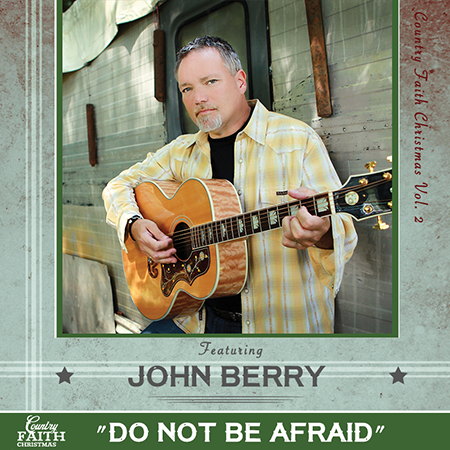 Distributed through Curb/Word Entertainment, the album is available now
through digital retailers, including Apple Music and Amazon here.
Country Faith Christmas Vol. 2 will be sold exclusively in Cracker
Barrel stores and is one of only four featured Christmas releases at
Cracker Barrel’s over 600 stores, which are located across the U.S.

“I am beyond excited to have a song on the Country Faith Christmas
project,” said John Berry. “Christmas is the most special time of year
and I believe Do Not Be Afraid is a perfect song for celebrating the
birth of our Lord and Savior Jesus Christ.”

“I have been a big fan of John Berry since I first heard that amazing
voice more than two decades ago. Over the years, I’ve had the pleasure
of interviewing him and learning that the man behind that voice is just
as impressive off stage in the character he displays and his compassion
towards people,” said Deborah Evans Price. “His Christmas collection is
one of my all-time favorite holiday albums and I’m so thrilled that  “Do
Not Be Afraid” is featured on Country FaithChristmas, Vol. 2. Excited
that it is included on such an incredible compilation Christmas album.”

The new holiday release follows the original Country Faith Christmas
album, which was released in October 2013. Following its release, the
album became the #1 CD Pick in People Country and was featured in Parade
magazine as well as many other national publications, including
Billboard, Country Weekly and more. Additionally, Country Faith
Christmas debuted in the Top 10 on Apple Music’s Top Country Album
Chart.

The Country Faith series was originally inspired by the popular books,
Country Faith and Country Faith Christmas, written by Nashville-based
journalist, Deborah Evans Price. Price is a Country Music Association
award-winning author, as well as a freelance writer for Billboard,
Sounds Like Nashville, First for Women, Redbook and Woman’s World. Price
is the co-founder of Country Faith, LLC where, “Celebrating the Heart
and Soul of Country Music,” is her ultimate goal. She has partnered with
Wildfire7 and Bob DeMoss to produce the Country Faith brand and its
product line.  For more information, please visit their website.

4. Have Yourself A Merry Little Christmas – Kelsea Ballerini

6. What Child Is This – Phil Vassar

15. Merry Christmas And A Happy New Year – The Bellamy Brothers

GRAMMY Award-winning country star, John Berry,
continues to celebrate the 25th anniversary since signing his first
record deal and has recently released his new single, “Beautifully
Broken,” which is featured in the soundtrack for the upcoming movie of
the same name. L Berry has placed 20 singles on the country hit parade
charts, six of which went Top 5 as well as a No. 1 on the Billboard and
Radio & Records country charts. He has earned numerous Gold and
Platinum records. Berry’s co-written “A Mind Of Her Own” and “Kiss Me In
The Car” introduced him to radio audiences in 1993. Then, “Your Love
Amazes Me,” “What’s In It For Me” and “You And Only You” thrust him to
stardom in 1994. “Standing On The Edge Of Goodbye,” “I Think About It
All The Time,” and “If I Had Any Pride Left At All” were all major hits
the following year. “Your Love Amazes Me” earned Berry a 1995 GRAMMY
nomination. In 1996, he scored a GRAMMY win for his participation in
Amazing Grace: A Country Salute to Gospel Vol. 1. Berry took “Change My
Mind” into the country music Top 5 in that same year. “She’s Taken A
Shine” became an even bigger hit in 1997. The same year, he was
nominated for CMA Vocal Event of the Year for “Long Haired Country Boy”
with Charlie Daniels and Hal Ketchum. Both fans and the media took note
when “There He Goes” was released as a 1999 duet with Patsy Cline.
Berry’s two most recent albums, What I Love The Most and his holiday
album, Christmas, are both available now on his website as well as
iTunes and other digital retailers.  Berry’s TV show, Songs &
Stories with John Berry, airs weekly on Heartland Television, The Family
Channel, The Country Network, Roku (via Heartland), AMG TV, Country TV
(New Zealand), and Keep It Country TV (UK). For more information, visit songsandstories.com. Follow John on his website at www.johnberry.com.