GO ‘ON SAFARI’ WITH THE KENTUCKY HEADHUNTERS’ 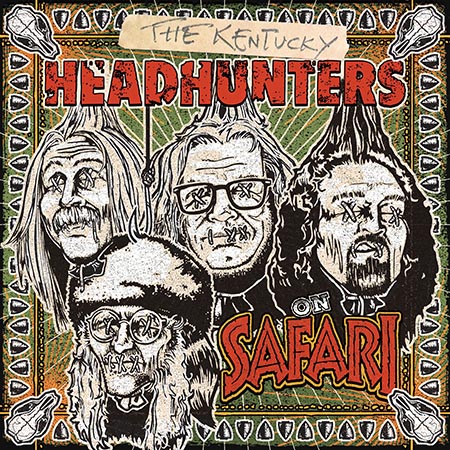 NASHVILLE, Tenn. (November 4, 2016) – The Kentucky Headhunters are taking fans on a musical adventure with their brand-new album, On Safari, available now on iTunes, and Amazon.
The group’s 12th studio album combines southern rock, blues, Americana
and country sounds to create a project as unique as the band itself.

On Safari features 10 songs penned by the band, as well as a
cover of Charlie Daniels’ “Way Down Yonder” and Alice Cooper’s “Caught
In A Dream.” A Plowboy Records/Practice House Records joint venture, the
album’s inspiration comes from family and the rural way of life. Click here to see behind-the-scenes footage of the band in the studio recording On Safari.

“They are still one dynamite band.” (MusicRow)

“…a bracing blend of guitar-dominated rock shot through with blues and country. (Sports & Entertainment Nashville)

“…a collection of fiery blues-tinged and country-flavored rockers
that rank with the best work the pioneering southern band has ever
recorded.” (Gibson.com)

“In my opinion not only are they one of the best bands in this
country, but in any country, anywhere.” (Hillbilly Jim, SiriusXM Outlaw
Country)

About The Kentucky Headhunters:
Known as “Southern Rock Royalty” and the “great American rock ‘n’
roll band,” The Kentucky Headhunters have maintained a longevity most
acts can only dream about. With a GRAMMY® Award, two Top 10 charting
albums, four consecutive Top 40 hits and countless other honors, The
“Heads” are credited for creating a unique blend of honky-tonk, blues,
and southern rock that appeals to the toughest music critics and
listeners of all kinds. Getting their start in 1968, brothers Fred and
Richard Young and cousins Greg Martin and Anthony Kenney, from Edmonton,
Kentucky, formed Itchy Brother, which later morphed into The Kentucky
Headhunters after Kenney departed and Doug Phelps joined the band. Their
first album, Pickin’ On Nashville, (1989), surprised the world when it became a major success, selling over two million copies. Their 2015 release Meet Me in Bluesland,
included the last vocals ever recorded of the late, great pianist
Johnnie Johnson — Rock N Roll Hall of Famer and legendary keyboardist
for Chuck Berry. The album reached the No. 1 spot on the Billboard Blues
Album chart the week of its debut. It also garnered top placement on
the Billboard Americana Chart. The band’s Fall 2016 release On Safari
is a southern rock album that tips the hat to family and the southern
way of life. The Kentucky Headhunters still tour extensively throughout
the United States and Canada, and recently completed their first-ever
European tour. For more information on The Kentucky Headhunters, please
visit www.kentuckyheadhunters.com.