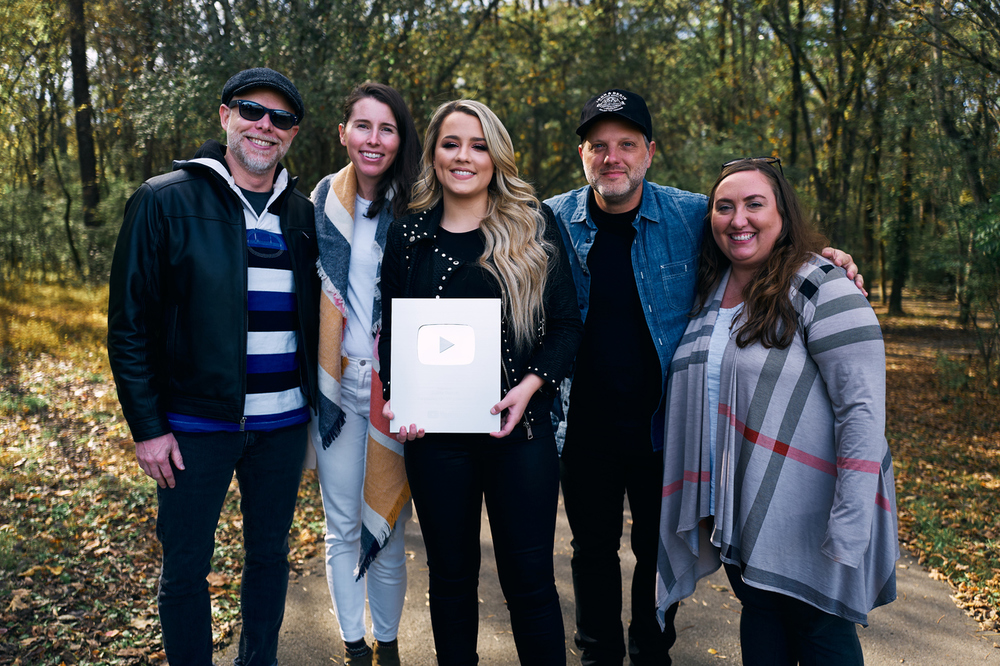 Contributing to her fast-paced streaming success, current single “I
Hope” has cracked the Top 50 of the Mediabase Country radio airplay
chart, and earlier this year was featured as a YouTube Country Spotlight
on SiriusXM’s The Highway. Reaching new heights, Barrett ranks as the
best performing Country female artist on Amazon Music’s Weekly One
(2019).

Recently eclipsing 100K subscribers on YouTube, Barrett was surprised by
her Warner Music Nashville team with a commemorative plaque at a recent
shoot. It’s just the latest high point in an already-monumental year.

“This has been an overwhelming year in the best way for me
professionally and personally,” shares Barrett. “Seeing the reaction to
my debut single, ‘I Hope,’ is so rewarding. From the response with
streams, to hearing the crowds sing all the words at my shows – as an
artist/songwriter, it doesn’t get any better than that. The Lord is
gracious, and I am truly blessed.”

Along with her 100K+ subscriber base, Barrett has racked up more than
24.4 MILLION YouTube video views to date, and was named to the
platform’s coveted 2019 Artist on the Rise initiative. The official
video for “I Hope” has already racked up more than 18 MILLION views
alone, while the just released “I Hope (Downtown Session)” is following
fast, gathering 85K views in its first week.

On the road, the Pennsylvania native is building momentum as part of Chris Lane’s BIG, BIG PLANS TOUR, felt through massive crowd-wide sing-alongs of the feisty payback anthem “I Hope.” The on-fire single has spent 23 weeks on Billboard’s
Emerging Artist Chart, is holding strong at #18 on Shazam’s Country
chart, and claimed 30,000+ track equivalents this week – surpassing
consumption norms for a TOP TEN AIRPLAY RECORD. Her tender new song,
“The Good Ones,” is heating up, and Barrett will continue touring with
Lane through the end of the year.

Warner Music Nashville powerhouse Gabby Barrett has burst on to the
Country scene with debut single, “I Hope.” Tapped as Radio Disney’s
newest “Next Big Thing” artist, a “Highway Find” by SiriusXM’s The
Highway, one of Rolling Stone Country’s “10 Best Country and
Americana Songs To Hear Now,” Amazon Music’s Weekly One best performing
Country female artist of 2019 and a CMT Artist Discovery member, Barrett
and her “sizzling slow burner” (Sounds Like Nashville) are garnering serious attention from fans and media alike. Making the national TV debut of the track on American Idol, and doubling down on Disney’s “ARDYs: A Celebration of Music,”
“I Hope” claimed the #1 spot on SiriusXM’s The Highway Hot 30 Countdown
and on Radio Disney’s Country Top 50 chart, solidifying Barrett as “a
voice you must hear” (The Pittsburgh Tribune-Review). She’ll
close out 2019 as featured support for Chris Lane’s nationwide BIG, BIG
PLANS TOUR, and has shared the stage with superstars like Dierks
Bentley, Kane Brown, Luke Bryan, Dustin Lynch, Jake Owen, Bebe Rexha,
Cole Swindell, Sugarland, Carrie Underwood and more. With over 100
MILLION on-demand streams to her credit, Barrett is in the studio with
GRAMMY-nominated producer Ross Copperman working on her debut
full-length album. A Pennsylvania native, Barrett began singing in her
local gospel choir at nine years old, started playing shows at age 11
and performed 136 shows in 2017 alone before rising to national
prominence as a Top 3 finalist on ABC’s American Idol.