EXILE WRAPPED UP IN YOUR ARMS FOR CHRISTMAS 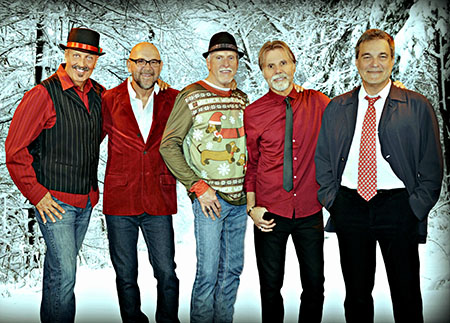 NASHVILLE, Tenn. (October 22, 2015) – Country rockers Exile will celebrate the Christmas season with a new album, Wrapped Up In Your Arms for Christmas,
as well as a concert Thursday, December 17 at the historic Franklin
Theatre which will feature new holiday music and the band’s decades of
hits.

After celebrating more than 50 years as a group, Exile
will release their first Christmas album in late-November. “We’ve been
talking about doing a Christmas album for years and we’re excited that
we finally have been able to reach that goal,” said keyboardist Marlon
Hargis.

Exile’s CD release concert will benefit the Southern
Alliance for People and Animal Welfare (SAFPAW), a non-profit
organization in middle Tennessee helping the homeless community face the
daily challenges of living in poverty with their pets.

This will be the second year in a row that Exile has
performed at the Franklin Theatre to benefit the organization. They
have generously donated their time and talent to help raise funds and
awareness for the mission of SAFPAW. In addition to the concert, there
will be a silent auction featuring autographed memorabilia and hand
written lyrics by Sonny Lemaire and Pat Boone.

“We are so grateful for the generosity of Exile and
the awareness and financial support this event provides for the
important work of SAFPAW in Middle Tennessee,” said Lee Ann Dichtel,
SAFPAW Chairman of the Board. “This is the second year for this great
event and it truly will be a great night of entertainment for a great
cause!”

Exile has a history with the historic venue. The
band recorded a live album at the Franklin Theatre, released last year,
and a DVD “Exile – Live at the Franklin Theater.” They are excited to do
the event again this year after successfully raising thousands of
dollars last year for SAFPAW.

About SAFPAW:
Southern Alliance for People and Animal Welfare is a non-profit
organization helping the homeless community face the daily challenges of
living below the poverty level are given the same opportunities to have
their pets cared for with weekly spay and neuter transports, donated
food and vet care. Since our beginning in 1998, we have spay and
neutered vaccinated over 10,000 dogs and cats in Davidson County and
that number continues to grow. SAFPAW also serves as an active Homeless
Outreach Organization with our focus on reaching those below poverty
level

About Exile:
Exile formed in 1963 looking to play small clubs in Richmond,
Kentucky, but managed to top both the pop and country charts during
their over 50 year-long career. Their most successful hit, “Kiss You All
Over” spent four weeks at the top of Billboard’s pop chart in 1978. In
the early 1980’s Exile started to focus on country music. During their
run on the country charts Exile has successfully had ten No. 1 singles
including “I Don’t Want To Be A Memory” and “Give Me One More Chance.”
They have toured with acts including Aerosmith, Fleetwood Mac, The Oak
Ridge Boys, The Gatlin Brothers and The Judds. The 5 original Exile
members reformed in 2008 and continue to tour today. Current members of
the band include J.P. Pennington, Les Taylor, Sonny LeMaire, Marlon
Hargis and Steve Goetzman.