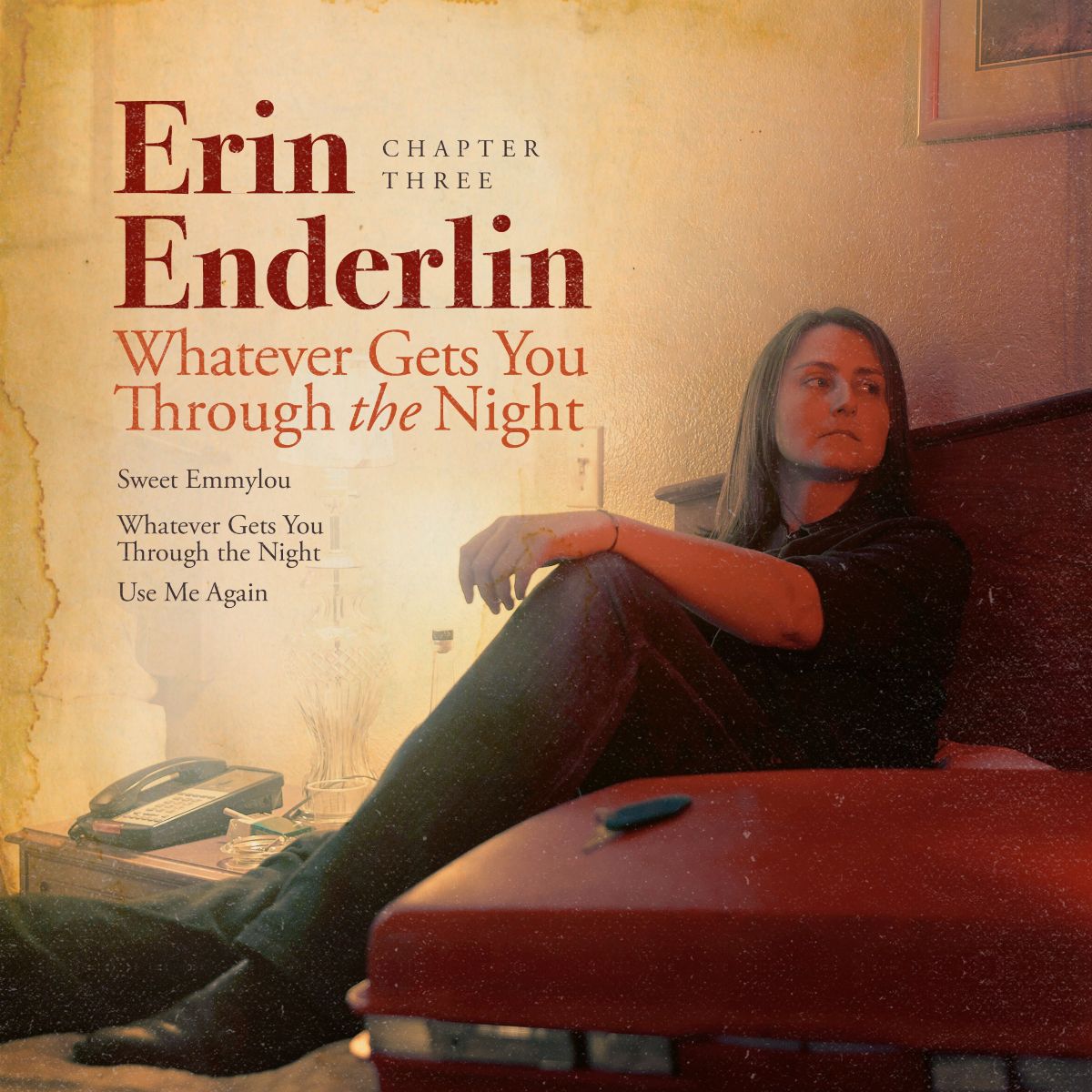 Erin Enderlin Announces Third Release in EP Series: Chapter Three: Whatever Gets You Through The Night

Nashville troubadour Erin Enderlin will soon reveal the third chapter of her four-installment 2019 digital EP series with the eagerly-awaited release of Chapter Three: Whatever Gets You Through The Night
on August 23. As did its predecessors, the new EP focuses on
character-driven lyrical storytelling on matters of love, loss, struggle
and hope.

This
time around, Enderlin receives storytelling help from some friends, as
she is joined on its three tracks by Dillon Carmichael (“Whatever Gets
You Through The Night”), Vince Gill and Alison Kraus (“Sweet Emmylou”)
and Ronnie Bowman on a gorgeous and faithful rendering of the Gene
Watson’s “Use Me Again.”

Enderlin
is already enjoying a successful 2019, with roughly a hundred shows on
the touring calendar and her songs included on new releases by personal
heroes Reba McEntire, Rhonda Vincent and Rodney Crowell. In June, she
took home three Arkansas Country Music Awards including Female Vocalist
of the Year and Songwriter of the Year. Shortly thereafter, the title
track from Chapter Two: I Can Be Your Whiskey, was featured in Rolling Stone’s “10 Best Country Songs To Hear Now.”

Throughout
her career as both a songwriter and an artist, Enderlin has remained
steadfast in her commitment to making music steeped in the genuine
traditions of country music and it’s that conviction that is fueling a
great deal of her current success.

“Erin’s authentic sound and heartfelt lyrics are reminiscent of the early days of The Judds,” Raised Rowdy recently proclaimed. “This is what country music should sound like, folks.”

Enderlin puts that authenticity on full display throughout Chapter Three: Whatever Gets You Through The Night. While the theme of Chapter Two: I Can Be Your Whiskey is the eternal pursuit of love, the thread that runs across Chapter Three: Whatever Gets You Through The Night is
of the bitter heartbreak that comes from losing it. The Arkansas native
croons mournfully about the travails of despair and loneliness on the
EP’s title track while “Sweet Emmylou,” is a plea from the song’s
broken-hearted main character to Emmylou Harris for help getting them
through their heartbreak. Enderlin chooses the perspective of the “other
woman” in Watson’s “Use Me Again,” written by Curly Putnam, Dale Dodson
and Billy Lawson, to round out this chapter’s reflections on the
desolation of love lost.

The fourth and final chapter in Enderlin’s storytelling tour de force is slated for release later this year.

The last few years have been especially busy for singer-songwriter Erin
Enderlin. While she first turned heads as a godsend to those aching for
an artist with some golden-era country backbone, Enderlin’s acclaimed
2017 record Whiskeytown Crier cemented her as something even more: a
literary songwriter and superb vocal stylist with a knack for sharply
drawn––and often sad––characters. Named a member of the 2018 CMT Next
Women of Country class and recipient of the Arkansas Country Music
Awards Songwriter, Female Vocalist and Album of the Year trophies, she
has surged to the forefront of new artists rooted in the genre’s rich
history. Enderlin is also a go-to writer for stars looking for
heavyweight country with classic panache––Alan Jackson’s “Monday Morning
Church,” Lee Ann Womack’s “Last Call,” Luke Bryan’s “You Don’t Know
Jack” and a host of other songs recorded by Randy Travis, Joey + Rory,
Reba McEntire, Terri Clark, Whisperin’ Bill Anderson and more are all
Enderlin-penned.