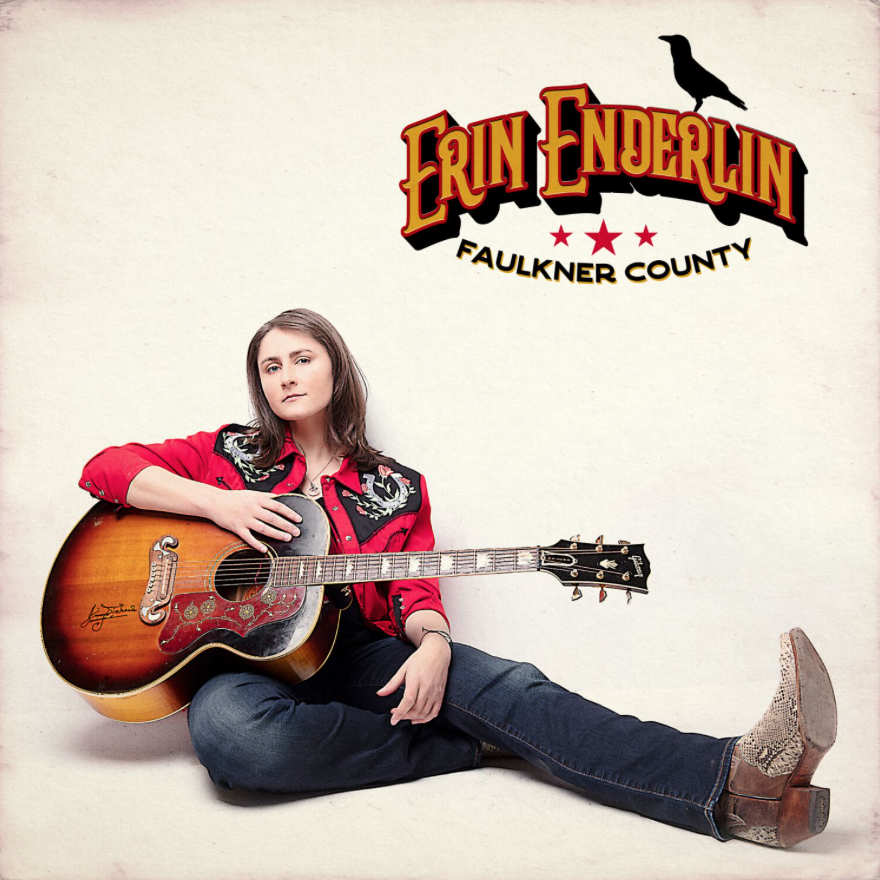 Erin Enderlin ups the creative ante with the unveiling of Faulkner County, her highly anticipated full-length album, due for release on November 1. Produced by Jamey Johnson and Jim “Moose” Brown,
the 14-track collection is an intimate ramble through lonely corners in
barrooms and bedrooms, where strength in the face of shame, longings
that may never stop, and past lives hang around like old friends.

Each of the songs from Enderlin’s acclaimed 2019 digital EPs are
included on the album, along with two brand new tracks: the aching “Hell
Coming Down” and carpe diem-invoking “Run, Baby, Run.” Also of note
here to Enderlin’s loyal fan base is the full band version of her
largely-acoustic 2018 single “These Boots,” produced by Alex Kline, who
also co-produced the album’s “Use Me Again” with Enderlin. Among the
special guests to appear on the album are Vince Gill, Alison Krauss, Terri Clark and Cody Jinks, who pour harmonies and soul into the collection, like a gathering of friends making music together for the sheer joy of it.

“Country music has been a force in my life since before I could walk,”
says Enderlin. “It may sound trite, but I get emotional thinking about
the journey that’s led me to the release of Faulkner County.  I
feel so lucky to be able to make records that I absolutely love, and to
get to work with some of the most amazing writers, musicians, and of
course producers of our time.  It’s the kind of thing that makes me
feels like all the years, and miles, and struggle have been worth it.”

The release of Faulkner County will cap off a landmark year for
Enderlin. As her four-part EP series reimagined the possibilities of
narrative arcs in music, her own musical heroes turned to her for songs.
Reba McEntire, Terri Clark, Rodney Crowell and Rhonda Vincentall
recorded Enderlin-penned gems in 2019. During a touring schedule more than 100-dates strong, Enderlin was a featured act on Jamey Johnson’s SiriusXM Outlaw Country Tour, AmericanaFest
and CMA Fest, and crossed the Atlantic for her first UK run. In June,
she took home three Arkansas Country Music Awards including Female
Vocalist of the Year and Songwriter of the Year. Shortly thereafter, her
song “I Can Be Your Whiskey,” was featured in Rolling Stone’s “10 Best Country Songs To Hear Now.”

“This is the stuff of country classics,” Rolling Stone praised. “Concise, tear-stained and all-too-relatable.”

Wielding classic country allegiance and Tom T. Hall yarn-spinning chops,
Enderlin has long-since established herself as a favorite of those in
the know. Faulkner County promises to bring even more believers
into the fold as it positions her as both a genre standard bearer and a
provocateur, determined to honor tradition as she experiments and
grows.

“My musical journey has led me down many different paths,” says
co-producer Brown. “From Jamey Johnson, Willie Nelson, Bob Seger, and
Chris Stapleton, to countless others, I’ve been fortunate to work with
some of the most soulful and gifted artists. I include Erin Enderlin to
that list. I am moved by the honesty and pain in her voice, and her
songwriting inspires me and pushes me to be a better writer. Listen to
Erin––she’s got something to say.”

Faulkner County is now available for digital pre-order through iTunes and Amazon Music via https://erin-enderlin.lnk.to/fcprepr.

The physical CD and three-sided vinyl LP as well as special pre-order bundles are available through Enderlin’s online store via https://erin-enderlin.lnk.to/fcprepr/artiststore.

The album can also be pre-saved to listeners Spotify accounts via https://erin-enderlin.lnk.to/presavepr.

The last few years have been especially busy for singer-songwriter Erin
Enderlin. While she first turned heads as a godsend to those aching for
an artist with some golden-era country backbone, Enderlin’s acclaimed
2017 record Whiskeytown Crier cemented her as something even
more: a literary songwriter and superb vocal stylist with a knack for
sharply drawn––and often sad––characters. Named a member of the 2018 CMT
Next Women of Country class and is the most-awarded Arkansas Country
Music Awards recipient to date. With the release of a series of three
digital EPs earlier this year, she has surged to the forefront of new
artists rooted in the genre’s rich history. A fourth and final EP, Chapter Four: The Queen of Marina del Rey will precede the release of Faulkner County by
two weeks. Enderlin is also a go-to writer for stars looking for
heavyweight country with classic panache––Alan Jackson’s “Monday Morning
Church,” Lee Ann Womack’s “Last Call,” Luke Bryan’s “You Don’t Know
Jack” and a host of other songs recorded by Randy Travis, Joey + Rory,
Reba McEntire, Terri Clark, Whisperin’ Bill Anderson and more are all
Enderlin-penned.