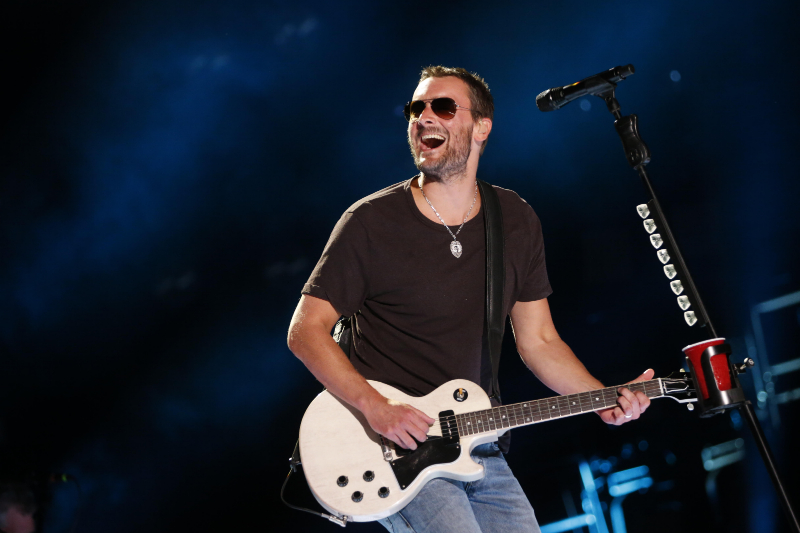 NASHVILLE, Tenn. – (Sept. 9, 2015) – An already amazing 19-month run
got even better Wednesday morning when Eric Church learned he was
nominated for a leading five CMA Awards, including top honor Entertainer
of the Year.

It’s Church’s first nomination in that category, and one earned through
tireless work, innovation and old-fashioned entertaining. He’s also up
for Male Vocalist of the Year, Song of the Year for “Like a Wrecking
Ball,” Single of the Year for “Talladega” and Musical Event of the Year
for “Raise ‘Em Up” with Keith Urban.

It’s the EMI Records Nashville recording artist’s first nomination for
Entertainer of the Year, an award given to the performer who has proven
to be a recording, radio and touring star as well as an ambassador for
the genre.

Church’s February 14, 2014, release The Outsiders was that
year’s top-selling country album and has continued to surge in 2015.
Church logged another No. 1 from the Grammy Awards-nominated album  with
“Talladega” and set a number of venue records around the nation on The Outsiders Tour,
including a stop at Nashville’s Bridgestone Arena. He also opened
Nashville’s new Ascend Amphitheater with a pair of critically acclaimed,
sold-out nights that showcased Church’s ability to hold a crowd of
thousands in rapt attention with just an acoustic guitar, his
songwriting abilities.

Church is tied for the nominations lead with Little Big Town, a vocal
quartet with which he coincidentally shares producer Jay Joyce. The
North Carolina native has now been nominated for 17 CMA Awards with one
win, 2012 Album of the Year CHIEF. The 49th Annual CMA Awards will be broadcast live on ABC on Nov. 4 at Nashville’s Bridgestone Arena.

For more information about Eric Church, visit www.EricChurch.com. And to
learn more about the CMA Awards nominations, visit www.CMAWorld.com.

About Eric Church
The Country Music Association and four-time Academy of Country Music
Award winner finished 2014 as country music’s top-selling artist, with
the year’s highest debut and sales of any release in the format as the
critical and commercial success The Outsiders reached Platinum status, marking more than one million albums sold. Debuting at No. 1 on both the Billboard Top
200 Albums Chart and Top Country Albums chart, “The Outsiders” garnered
GRAMMY, CMA and ACM Album of the Year nominations and features his No.1
hits “Give Me Back My Hometown” and “Talladega” as well as his current
single “Like A Wrecking Ball.” The Outsiders is the follow-up to Church’s Platinum-certified CHIEF,
named the 2012 Album of the Year by both CMA and ACM, and
GRAMMY-nominated for Best Country Album. The LP featured five Top 20
singles: “Homeboy” (certified Platinum for sales in excess of 1
million); the Top 10 “Like Jesus Does” and the Top 5 “Creepin’” (both
certified Gold for sales in excess of 500,000); and two No. 1 hits
“Drink in My Hand” (certified Platinum) and “Springsteen” (certified
Double Platinum for sales in excess of 2 million singles). Church’s 2006
debut album, Sinners Like Me (2006) and his sophomore album Carolina (2009) are both RIAA Gold-certified.