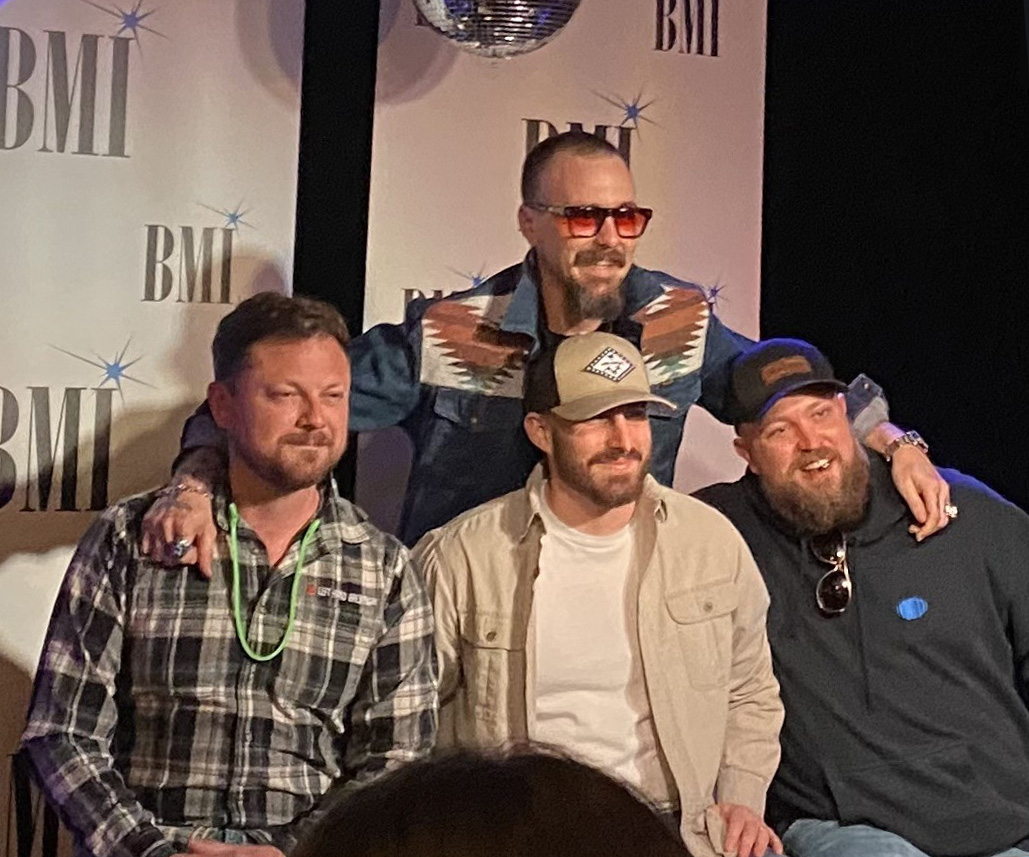 Elvie Shane’s “My Boy” honored at Number One party

Elvie Shane’s “My Boy” honored at Number One party

First No. 1 for Shane and writers

Nashville is a town that knows how to pay tribute to its real stars: the songwriters. A Number One party is designed to do just that, but when the recording artist that took it to the top of the charts is also one of the song’s creators… well, that’s the icing on the cake.

That was the case at the Number One party held Wednesday, March 23, 2022 at The Local in Nashville, where friends and family joined with members of the music industry to pay tribute to the writers of “My Boy,” the debut hit for Elvie Shane.

“My Boy” came to fruition at the hands of songwriters Elvie Shane, Russell Sutton, Lee Starr and Nick Columbia. The story behind the song is a very personal one for Shane who recalled the writing session with his co-writers as they sat with their guitars on the back porch.  At that time, none of them had song publishing deals or record label deals and were living pretty much “paycheck to paycheck.”

Shane shared the story with them that his life had found new purpose since he met Mandi – now his wife – who already had a five-year-old son named Caleb. Shane said that he had seen a Facebook post that resonated with him: “I don’t have a stepson, I have a son that was born before I met him.” One of his co-writers asked Shane to talk about his stepson and he replied, “Dude, he’s my boy.” They knew they had the title for the song.

It was the start of a long journey from that back porch to the top of the Billboard Hot Country Songs chart. Before it was even released to Country radio, “My Boy” grew into a social media sensation as families across America (and then around the world) took to Tik Tok and began posting their own loving stories of stepdads and stepchildren based on the Elvie Shane song.

Produced by Oscar Charles, “My Boy” was released on September 21, 2020 on Wheelhouse Records, an imprint of Broken Bow Records (BBR).  From the day it entered the Country charts, it began its slow but relentless climb, finally reaching the pinnacle on October 23, 2021, after a grueling fifty-four weeks.

During the presentations at the Number One party, Jon Loba, President of BBR Music Group/BMG Nashville, addressed the songwriters seated on the stage, noting, ““This was a one-listen song for me. I wouldn’t hear of anything else but this being the first single.” He added, “Congratulations to you guys from the bottom of my heart,” and recognized the role that social media played in the phenomenal success of “My Boy.”  It was noted that there are now more than 300,000 different Tik Tok video versions of the song with totals running into the hundreds of millions. (In response to popular demand, Shane even recorded a “My Girl” version of “My Boy” that is posted on YouTube at https://www.youtube.com/watch?v=CNMLjrn-Jps.)

Each of the writers of “My Boy” received a custom Taylor guitar, presented to them by BMI, in recognition of their first Number One song.

The success of “My Boy” helped Shane receive a nomination in the Best New Male Artist category at the recent Academy of Country Music (ACM) Awards. The song is also nominated for Breakthrough Video of the Year at the 2022 CMT Music Awards, set for April 11, 2022 on CBS.

Meanwhile, Shane is on the road with his first headlining My Kinda Trouble Tour 2022, with special guest Frank Ray. It will be the first chance for fans to see and hear Shane perform songs from his new album, Backslider. His current single, “County Roads,” is already impacting Country radio. Tour info and tickets (along with music and merch) at https://www.elvieshane.com. @elvieshanemusic Listen/stream “County Roads” at https://elvieshane.lnk.to/countyroads.